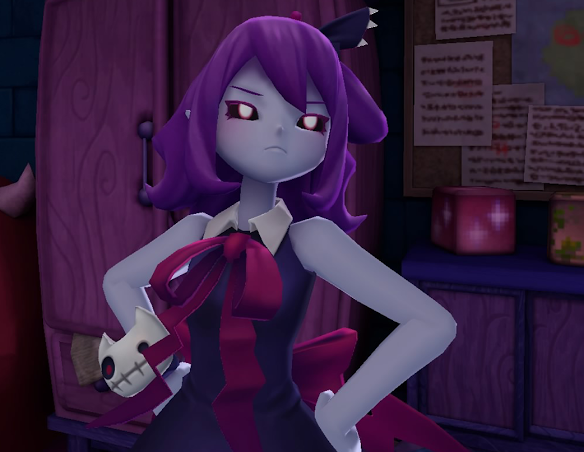 Virtual Reality is the future of tabletop gaming. The weaknesses of VR as a gaming platform – most significantly the limited ability to physically move around – are not an issue when the VR game is emulating a sit-down experience, as you would were you playing a tabletop game. Moreover, VR offers some advantages to enhance that tabletop experience – significantly the ability to have animation. Enter No Heroes Allowed VR, which proves all of the above.

No Heroes Allowed is a tabletop strategy game, with a healthy dose of humour. You play as a general of the evil side, and your goal is to expand a base that starts off in one tiny corner of a map on a tabletop, across the entire map. You do that by recruiting a range of monsters and then direct them to attack “good guy” buildings, defeating the various heroes that protect them in the process. Eventually you’ll have amassed enough of an army to attack the enemy castle, and claim victory over the map.

The game isn’t especially difficult. In fact it’s the very definition of a lighthearted, casual strategy game. There’s a limited number of units to choose between, and there’s no strategy involved in moving them around. All you really need to do is ensure that the tougher monsters have a source of food (the weaker monsters), and that there’s enough variety to combine certain monsters to make even more powerful ones appear on the battlefield. It’s busy work, but not overly difficult, strategically. Later levels offer some tricks and challenges with the geography, but for the most part as the game gets more difficult (and as a casual strategy game it does eventually grow some teeth), it’s because the enemy numbers and toughness becomes increasingly unbalanced against you in the early going.

VR is the future of strategy games. This is a delight. #PS4share https://t.co/YYMB7pbDm1 pic.twitter.com/sjhYBiQk26

What I suspect will confuse a number of people at first is just how many of their little soldier monsters seem to be perishing of hunger at first. No More Heroes’ greatest flaw seems to be a consequence of the VR platform itself; it’s quite a poor platform for displaying complex UI information. VR is great for its immersion, but the more bars and bits of data developers fill the sides of the screen with, the more batty they’ll send players as they try and keep track of it all.

It catches No More Heroes out in its resourcing system. As with most strategy games, you need to gather resources together in order to create ever-more powerful units. In this game, that manifests as a food chain. The basic grunts – slimes and the like, eat particular plants in order to reproduce, and the next food tier up eacts those grunts in order to stay healthy and reproduce themselves. And so on and so forth all the way up the food chain. The problem is, the interface never really allows you to figure out if there’s enough food around, or how quickly the food will run out. Your only real guide is when the base resource begins to dry up, and it can be difficult to track as the screen fills up with multiple groups of food and monsters. Thankfully, as the game’s designed around short, sharp levels, carefully managing resources isn’t as important as making sure there’s a temporary supply, so you’ll just need to work fast to use any powerful units you create as part of an attack before they begin to starve.

If that makes it sound like the game’s about spammy, speedy play, that’s because it is, to an extent. This being said, there’s just enough to the game to keep players feeling like they have agency over it all. There’s a streamlined, but enjoyable skill tree for all the game’s various monsters, and the difficulty scales in a reasonable enough pace that you’ll never find it unmanageable. The amount of raw content in No Heroes Allowed VR isn’t so substantial that you won’t be glad for a couple of tough levels at the end to really push you anyway. 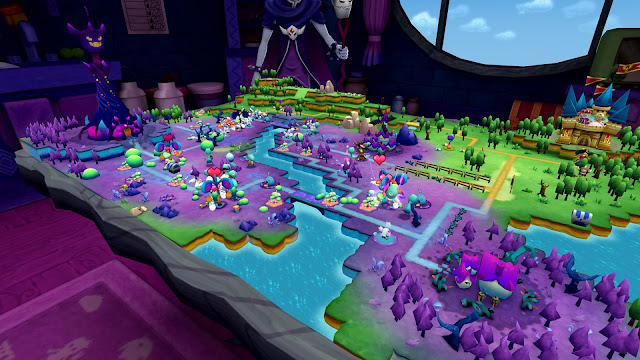 If you’re anything like me, you won’t even really notice that you’re sweeping through the levels or retrying the occasional one a few times in a row, because you’ll be absorbed in the production values. No More Heroes VR is a particularly good looking game. You’ll be constantly mindful that what you’re watching go on around you is taking place on a tabletop, like the wargames of old. Only instead of static little plastic soldiers or Warhammer figures, now you’re watching fully animated blobs of colour. Blobs that manage to have a lot of personality, all things said and done. Whether it’s the dragon raining fire down on silly little heroes in shining armour, or big yeti-like things tossing balls of energy back at wizards until one falls over, the various levels in the game all pop with colour and vibrancy.

This is supported by a very dry and self-referential sense of humour. As you command your armies around, a deliberately B-grade cartoonish villain watches on, throwing out comments alongside his daughter based on your performance. The pair rarely miss an opportunity to throw a reference in to another game or games industry topic. Some are more subtle than others, but none of the humour is as extreme or overt as, say, the Hyperdimension Neptunia series. This game punches for a classier kind of mocking humour, and it lands many more punches than it misses. Indeed, as you’re playing, challenge yourself to see if you can get all the references. It’s actually not that easy!

It’s the humour and presentation that makes No More Heroes VR worthwhile in the end. Mechanically the game is sound but uninspired. What pulls it ahead is how beautifully it represents the sheer joy of watching little toy soldiers move around a tabletop battlefield, and how it even manages to enhance a childhood experience I spent far, far too much time doing as a kid. Throw in a good-natured sense of self-ribbing humour and, as someone who hasn’t the time or local social network to continue playing tabletop wargames, I now have a way to get a fix. 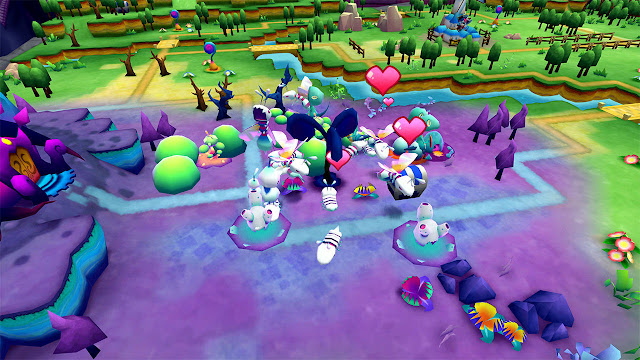 The next step will be to make VR versions of the Total War games. That’s where the real potential in VR is for us old wargamers.