Superheroes are big these days, with blockbuster movies and even the comics they are based on selling far in excess of what was once deemed a nerdy hobby. Megaton Rainfall isn’t based on any particular comic but it nevertheless belongs to that tradition, tasking you with being a superhero to stop invading aliens from destroying the earth.

You play as yourself in first person view; the only parts of your body you can see are your hands and feet. You are told by a talking god-like cube that he created you to stop alien invaders that are menacing earth. You were once human, but not anymore, and that you cannot die. This isn’t just a narrative thing; there is no health bars in this game, making you feel as invincible as Superman. That doesn’t mean that you can’t fail though.

The invaders have “Xenospheres” that they are using to try to destroy the earth. You are also told that there are some out there that the invaders have yet to find. From here you take on a series of missions, either to stop the aliens, or to search for the Xenospheres. They can be found on faraway planets and asteroids, so it won’t be long before you leave the confines of earth to explore the universe. The Xenospheres out in space are held by a things called “signs”. Signs are writings from the creator each one telling a bit more of the story. After you hear that message you can destroy them to get the Xenosphere inside. 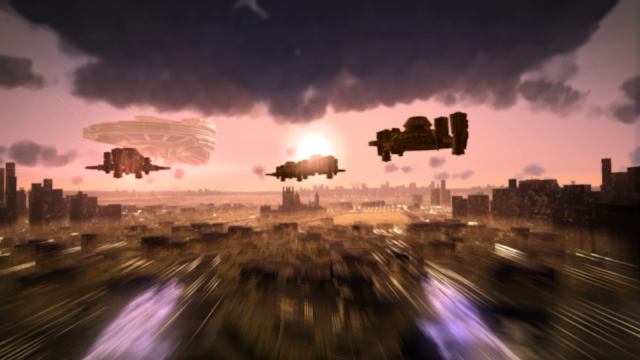 Missions on earth require you to fly to a city that you need to protect, at which point the battle starts. The invaders attack the city. While you are effectively invincible, the city itself has a health bar that goes down as casualties mount up. The invaders are not the only ones who can damage the city though. You can also harm the city if you don’t aim your shots carefully…. and one of your own more powerful attacks can destroy the whole city in one shot. It’s like the development team watched Batman V. Superman and decided to turn one of the key themes around the moral ambiguity of the collateral damage that superheroes inflict on those around them into their entire game.

Most invaders have a weak spot that can be shot or dashed into to kill, though some of the bigger ones are a bit harder to kill. The variety in enemies is good, and every level seemed to have something new to face. My favorite was ones that would turn into a building and ram into other buildings but when you hit them they started to distort and wiggle around the ground. After defeating the final invader in a mission you get the Xenosphere and after a few levels, the talking cube gives you a new power.

It’s worth noting that this isn’t a game in which you’re meant to struggle. There are lot of checkpoints, so if the city is destroyed by the invaders or by yourself on accident you don’t lose much progress, and as an added bonus, the city’s health will be filled completely. So, though the game does ask you to question whether the behaviour of these superheroes is always acceptable or responsible, it’s careful to make sure you’re never frustrated while playing. 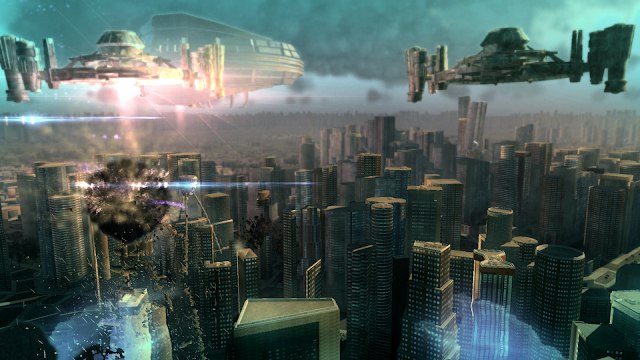 Space has always fascinated me and being able to fly around a huge universe was one of my favorite things to do when I wanted to get away from the action. I don’t know if there is a limit to how far you can actually travel go but I never found an end to it. I kept finding new planets in new solar systems, with their own star or stars from ones like our own right through to giant blue stars.

Now the game is playable with both VR and non-VR I played the game both ways and I must say both ways are good. Megaton Rainfall looks better in VR but the controls take time to get used to. Why the game won’t let you use the Move controller is a little odd considering that your in-game character is using his hands for the majority of his actions. There is a lot of movement in the game, which would not have been a problem were it for the fact that people can get motion sickness from VR quite easily. Thankfully, the game also comes with a lot of VR settings also to help you minimise that potential problem. I’m really happy that it had all those settings as nothing’s worse than playing a game that makes you feel sick. Also helping is that it’s a fairly brief game – around four hours in length – meaning that it won’t outstay its welcome.

Megaton Rainfall is more of an experience than a game and one I soon won’t forget. It’s short, and simple, but asks a good question of the player while also giving him or her plenty of action. It’s better with VR, but worth a look in for just about everyone.