Lots of games explore Chinese history – from Dynasty Warriors, to Jade Empire, to that panda expansion from World of Warcraft – but since now not many of the games which have done so were actually from China. It would be because of the market’s liking of big MMORPG’s and a blanket console ban which prevented worldwide release of Chinese games, but with the ban lifting in July 2015, I imagine the development scene got cracking right away. Hidden Dragon: Legend arrives on the PS4 as one of the first fruits of the movement, mixing beat-em-up gameplay and cinematic narrative in a bid to wow both local and international audiences.

Developer MegaFun Games mixes swordfighting, platforming and a little exploration to create a varied gameplay experience. The combat is serviceable, translating the kinetic energy of a 3D beat-em-up to a two-dimensional plane, but it’s not without its quirks. The protagonist, Lu, has a variety of sword strikes mapped to light attack and heavy attack buttons, a dash, activatable super moves and some additional movement options which you progressively unlock. It’s a system built around ground and aerial combos, knockups, dashes and animation cancelling to smoothly link between these moves. It’s also punishingly difficult, ensuring that players who just want to button mash won’t make it far past the first chapter.

The pacing draws influences from both the God of War philosophy of weighty animations and big enemies who need to be attacked in opportune moments, and the Dynasty Warriors philosophy of quick animations and small enemies which needed to be herded and juggled into combos before they get the chance to strike. On principle, all the interlocking systems work fine, but the problems start showing once the game decides to mix the two styles into the same combat encounter. There are big, stompy enemies with uninterruptible attacks which you need to dodge, and small, evasive enemies which damage you if left alone. Players will need to figure out how to deal with both kinds at once, and it doesn’t always work – some battles wind up frustratingly hard because there’s a huge, unflinching enemy soaking your blows while others that would normally die to one combo score free hits on you. I wound up dreading combat segments because they stop the pace of the game entirely until you finally overcome what feels like an arbitrarily placed challenge. 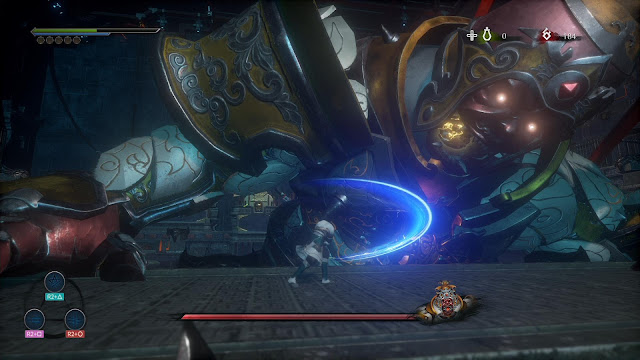 The game features light RPG elements which develop as you play. Defeating enemies and opening hidden chests scattered within the level nets you credits which can be spent on upgrading passive abilities, unlocking combo moves or buying potions that restore your health. Passive abilities are mostly statistical buffs which probably help, but I couldn’t feel their influence because the game doesn’t show you exactly how much damage you do. Additional combat options are always great in action games, so I set out trying to unlock and incorporate as many into my playstyle as I could. The problem is the potions, which you’ll probably need to buy at some point to survive. They get incrementally more expensive the more you buy. If you screw up a lot in the early chapters, you’ll have to contend with exorbitantly expensive potions in the later ones, meaning you won’t be able to afford all the combat tricks available. It’s a system which punishes bad players by making the game harder, and while it does offer some interesting risk-reward situations, I can only imagine how much frustration the tougher sections will cause to less experienced players.

In a merciful gesture, however, the level designers seemed to understand that not everyone enjoys crushingly difficult combat and have given players option to avoid some encounters. In a few instances I was able to circumvent some fight sequences that were causing me trouble by taking a higher or lower route, and I admit it’s clever how MegaFun Games makes the branching pathways work in a two dimensional plane. The levels also feature simple platforming and puzzle challenges which break up the gameplay and add to the cinematic tone. The platforming isn’t the best, I wouldn’t say it’s unwelcome either.

Hidden Dragon Legend also boasts a solid story mode which helps it stands out from other games of its genre. The plot follows an amnesiac swordsman with mysterious powers uncovering a shady organisation of royal assassins. While it’s not particularly original, it’s still so much fun to see all the big personalities, picturesque locales and explosive fights unfold in front of you. There are plot twists, dramatic cutscenes, enigmatic characters and just enough lore to complement the action without dragging it down. The English voice acting is enjoyably hammy in a Dynasty Warriors 3 kind of way and it meant the game felt like it was excited by its own story, and that’s a fantastic vibe to have. In China, it’s not unusual to go to the cinemas and watch what is effectively a 2-hour long action sequence with little exposition and lots of spectacle. Hidden Dragon: Legend is one of those movies in playable form, and perhaps it’s my familiarity speaking but I found it to be an excellent comfort game. 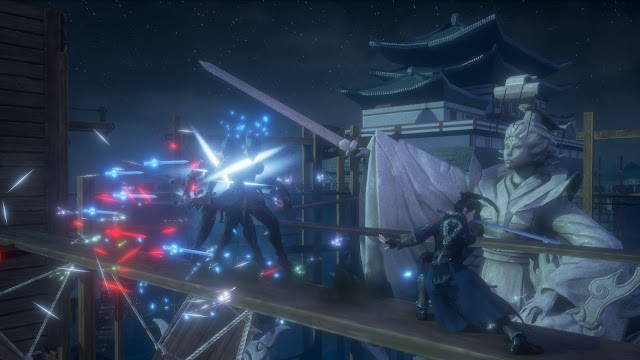 Graphically, the game is a real treat. It’s built with the Unreal 4 Engine and pushes it hard – your PS4 might start sounding more like a vacuum cleaner than a console – but the results are gorgeous, expansive backgrounds filled that you’ll want to stare at forever. The game’s battle sequences are carefully planned around the landscape, so you’ll never be fighting enemies while looking at a drab cave wall or a featureless plain – instead you’ll be slashing and dodging on rickety wooden bridges over fog-shrouded crags, or on crumbling wooden scaffolding surrounding an enormous stone dragon. It’s very much a romanticised visual journey through a fascinating period of Chinese history.

Character animations don’t have the same level of care placed on them, which is a little disappointing. The models value functionality over realism to telegraph hitboxes and allow animation cancelling, although enemy attacks don’t always have the clear tells they need in a game like this. The camera can also cause problems: if I try to jump over an enemy in combat, the camera will scroll up with me until I can’t see the floor, so when I come back down I could be landing straight into an attack. Similarly, enemies can ready their attacks from off screen and come charging at you with little warning. It’s not game breaking, but it does need to be played around and it’s going to try the patience of beat-em-up fans.

Ultimately, Hidden Dragon: Legend is a fairly average beat-em-up/platformer, but its sky-high production values and sheer love of spectacle is sure to delight players. It has its frustrating moments and questionable design choices, but I stayed interested in my entire play session – if not for the combat, then for the next plot twist or beautiful panorama. All of this speaks of a development team which may not have had the best technical prowess, but they gave it their best shot anyway, and it makes me excited to see what more the Chinese development scene has to offer.