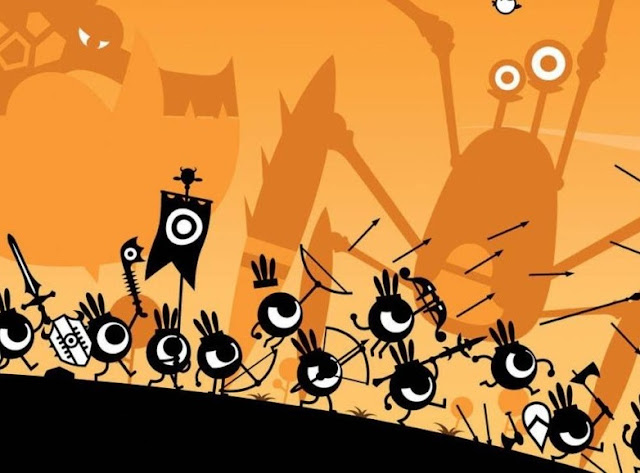 I never thought, if there was a game that would wind up getting me divorced, that it would be Patapon. I figured that eventually the Hatsune Miku thing would catch up with me, my wife would have enough of it, and that would be the end of that. But no, it might just be playing Patapon within earshot of my wife that causes it.


See, the rhythms of the game are now so catchy that she can’t get them out of her head. And she’s blaming me for it. Fair call, really, but putting aside Patapon’s ability to cause marital distress, this game is really good. I missed the original release of it, and now, having played it, can’t believe I did that. Thank goodness for HD remasters. 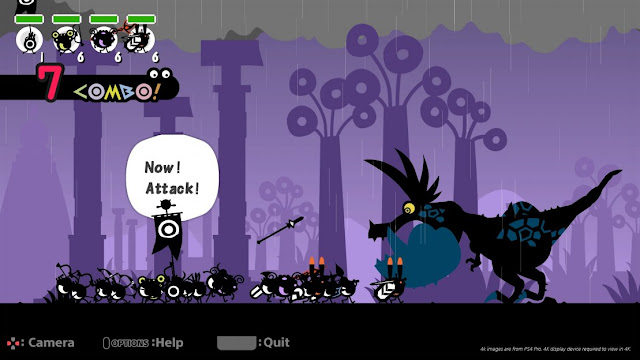 Patapon was originally a PSP game, but it’s one that scales so perfectly to the PlayStation 4 and the big screen TV experience, because there isn’t a polygon in sight, and the tribal theming of the art lends itself well to bold, big, and brightly coloured lines. Nothing about Patapon’s presentation would have pushed the PSP’s hardware, much less the PlayStation 4’s, and yet, as a vivid celebration of feverish colour and energy, Patapon is one of the best looking games on the console. It’s instantly appealing and charming, before you even start playing, and the longer you sit with it, the more mesmerising the art becomes.

It helps that the entire visual engine is structured around the flow of the gameplay, which in turn is structured around the rhythmic, drumming beats of “pata pata pata pon,” “pon pon pata pon,” and other variations. The basic idea of Patapon is to lead an army of cute little eyeball soldiers into battle, and then command them to attack, defend, and march by tapping out commands in time with the rhythm. Each noise is mapped to a single button, so “Pata pata pata pon” requires you to tap one button three times in a row (in time with the rhythm), and then a different button once. That command is the one to get your characters to march forwards. When you encounter an enemy you’ll need to instead tap in “pon pon pata pon,” which is the attack command. Later on, defend and other commands are added into the mix, which require other sets of buttons.

It’s a rhythm game, focused entirely on creating the percussion of the music, and it’s unlike any other rhythm game you’ve ever played before. It’s also incredibly addictive. Keeping a good, steady beat will result in your army entering a “frenzy,” and improving their combat abilities, but it can be difficult keeping a steady beat when your soldiers are facing down a horde of enemies or a giant monster. There’s always the temptation to stab at that “pon” button and press it too fast. 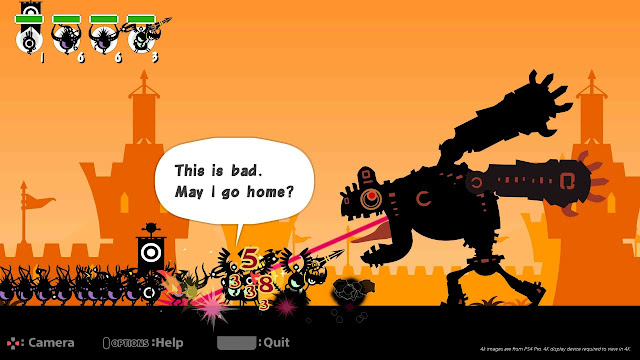 But as you get better at the game, there’s a gorgeous flow to the action, with a too-ing and fro-ing as you mix up marching and combat orders, defence and attack, that makes what’s going on on-screen feel like a conversation between two musicians, as played out on a musical score. It’s abstract, but it gets to the heart of what music is as a storytelling experience – it’s lyrical and poetic, with transitions between statements and effects that roll into one another seamlessly and – when done well – beautifully. Once you start a level in Patapon, the movement and flow never stops, aside from when do you jab one of those buttons too quickly, and your characters all trip and fall over themselves from the mistake. The disruption to the flow is jarring and sharp, and when it happens I felt much like I do when I’m playing piano and make a mistake in my rhythm. I always find it to be a sign of a good rhythm game when the experience of playing it feels similar to the experience of playing a real instrument.

The other side to Patapon is building up your little armies of soldiers to send into battle. Using resources collected from levels, you can summon a wide range of different characters, from melee fighters to ranged attackers, and then form up an army of them to take into a level. These light strategy elements really don’t go much further than making sure that you’re picking the right units to deal with the threats posed in a level (you are limited in terms of how many you can take with you on any given level), but the characters themselves are all adorable, and playing around with army builds helps make you care for their survival and success. I hated whenever a big monster ate one of my little fellows. 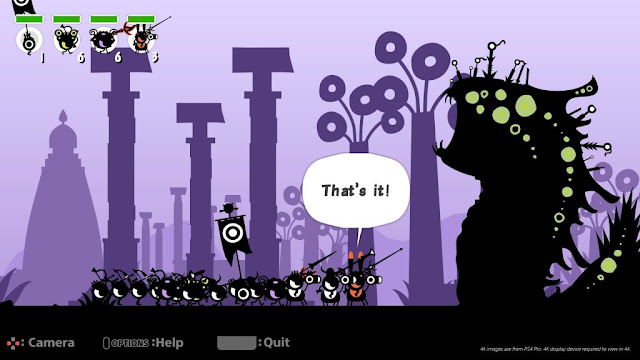