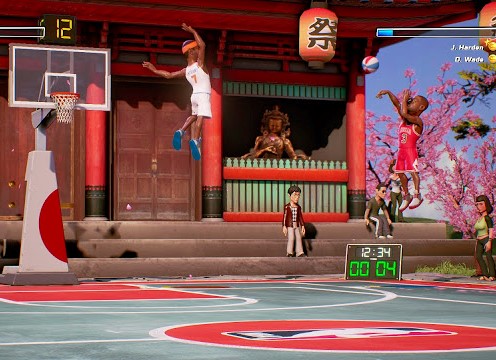 Of all the different sports options out there, I think basketball works best for crazy arcade action. NBA Playgrounds manages to mostly capture the essence of what made NBA Jam so popular decades ago, though its attempt to update the formula also misses the mark at times.

While basketball is certainly a team sport, it allows for more individual greatness than most. It places fewer players on the field of play than most sports, it has an insane amount of continual back and forth and one player can dominate the ball in a way few other sports allow. This has proven to make basketball one of the most divisive sports out there as some people bemoan the potential for ball-hogging while others take great pleasure in watching a legend like Michael Jordan putting a team on his back and carrying them to a championship.

Having grown up watching and playing basketball, I am clearly a fan and these elements have always made basketball one of the more accessible sports out there. You can’t play hockey, soccer, NFL football or baseball with just two or four players effectively. You can play out portions of those sports – hitting and batting, catching and throwing – but basketball actually allows for a complete experience. 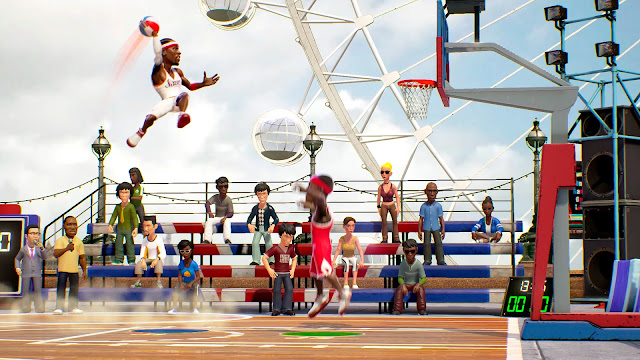 This all comes into play because NBA Playgrounds is a game of two-on-two streetball. There is certainly skill involved here, but the gameplay is far easier to pick up on than a more simulation style of the sport, like 2K offers. It helps that the timing-based shooting mechanic gives you feedback (early/late) when you miss. The offence is, for better or for worse, incredibly simple. It can get a bit crazier when you start to link mid-air passes into ally-oop plays, but generally speaking you want to blow by your opponent for dunks or pull up to drain three pointers.

Defence is where I start to struggle a bit. There is a push mechanic that works reasonably well – but it drains your Lottery Pick (more on that below) meter, a steal and a block mechanic. The latter two mechanics are less functional, and less inclined to work; you’ll often feel like you should have achieved a steal, only for it not to work. It gets the job done, though the emphasis is on the offence. NBA Playgrounds is at its best with its gravity-defying and ridiculous three point bombs and twenty foot dunk attempts. It helps that visually, the game actually pays excellent homage to the players (modern and retired legends) with amusingly large yet immediately recognisable heads on overly skinny and smoothly animated bodies. Whether you are watching Magic Johnson pull off a flashy pass or Shaq bringing a monster dunk down, the Legendary players are a hoot. You can unlock different venues in tournament mode as well, which gives you some visual background variety, though all of these courts play out the same way, which feels a bit like a missed opportunity to add some gameplay variety to the mix.

One of the best features is the ability to build your team of two out of players pulled randomly from packs of cards. You earn new packs by gaining levels for yourself or completing objectives like winning a tournament (essentially winning four games of escalating difficulty at a particular venue). There is some progression tucked into this system as well, as every time you use a player, you gain 100 experience points that allow you to progress them from bronze to silver and then to gold. If you get a duplicate of a player’s card when opening a pack, you get a quick 100 experience points for that player instead. As someone who collects sports cards, that is a pretty fun little way to go about building up your roster. 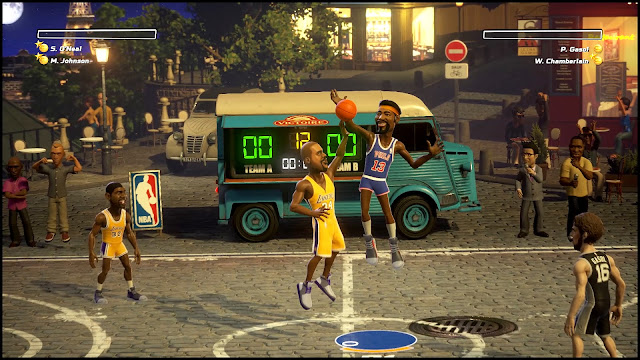 Despite the entertaining overall premise, there are a couple of things that hold NBA Playgrounds back slightly. One is that the gameplay is very random – and what I mean by that is there are certain techniques (like stealing the ball or getting a ‘perfect’ timing on my jump shot) that I really was not any better at ten hours later than I was in the very beginning. Some additional visual feedback sure would have been nice, as I can do things like this almost effortlessly in other hoops games (I have literally nailed ‘perfect’ timing on jump shots in NBA 2K17 for example dozens of times in a row, but I can go an entire match in NBA Playgrounds without getting even one, which seems odd to me). Also, there is a power-up system that allows your team to gain a random ability for a time once you pull off enough spectacular moves to fill up your Lottery Pick meter. The biggest issue is that these abilities are all over the place and can have huge ramifications on the final score. Probably most egregious are the slam dunk times two and the shot multipliers, which are far more useful in a game than a temporary speed boost or a shortening of the shot clock.

The other concern is that there just is not a lot of depth in the game. I beat all of the tournaments and got the trophy for 100 unique players all in my first night (though in fairness I played for about six straight hours during my first session, which is a testament to how much fun I was having). Still, with somewhat sketchy online play (I have had to sit upwards of fifteen minutes to get some matches going) and a lack of additional modes and variety, NBA Playgrounds is destined to become a fun experience that serves as fifteen minutes of filler here and there without being a game that I likely spend long periods of time with going forward.

As a spiritual successor to NBA Jam, NBA Playgrounds really does a great job of recreating that zany arcade feeling of streetball two versus two action. As a huge fan of the genre who recalls dropping a lot of quarters into the NBA Jam arcade cabinet when I was younger, I am the target audience for this title. The slick visuals and over-the-top action are a lot of fun, but some inconsistencies in the gameplay and a lack of depth limit this to title to a status of fun filler of must-play hoops action.