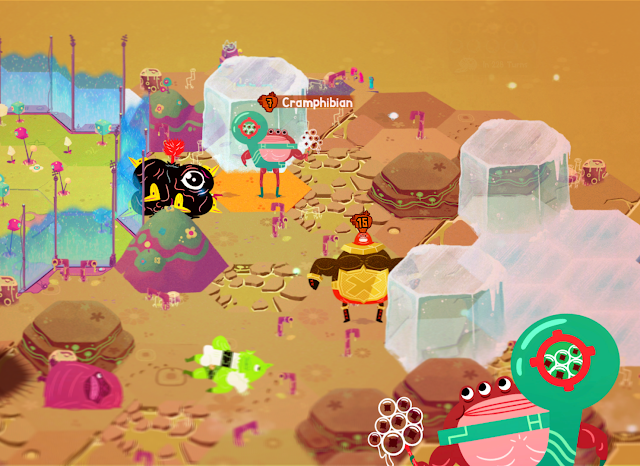 In the past, I have avoided anything labelled “roguelike” as if it were the plague. No way, no how was I going to go near games belonging to what just may be the most difficult genre of all time. Randomly generated levels? No difficulty selection, but instead the promise of being darn near impossible to complete? Why on earth would anyone want to play that? Especially considering it is me we’re talking about here; I once (infamously in these parts) beat a hole into my desk out of frustration playing Skate 3. I’m also supposed to stay relatively stress-free, although my doctor also think it’s possible to sleep nine hours a night and that’s quite insane so maybe it transfers over.

I was extremely nervous beginning Loot Rascals, a deck-building roguelike. What if the game was so hard I wouldn’t be able to get far, and thus struggle reviewing it? What if the game was too complicated, and/or I too stupid? What if I broke my prized limited edition PS4 controller? Yet the second I began the game’s tutorial I realised that despite the immense difficulty to come, there is an innate charm in the graphics alone that made my first roguelike ever seem accessible. I was no longer afraid of the difficulty, instead instantly embracing it because the more difficult the levels meant more time immersed in this strange, hexagonal, neon world? I decided I must spend as much time as possible in this place where an upside-down boot provides head protection.

Character selection options are limited. In fact, it is nearly impossible for me to write “options” because there are only two: a fair-skinned boy or a dark-skinned girl, both clad in head-to-toe space gear. I chose the girl as I tend to, and prepared for blast-off! Starting at the tutorial is imperative for anyone beginning the game for the first time or returning after a long spell away. It would be difficult to stumble your way through a strange planet without understanding the difference between day and night (despite the obvious) or orange attack and blue defend symbols (if an enemy is defending, you’ll attack first), and the tutorial offers a quick refresher as well as a complete guide. 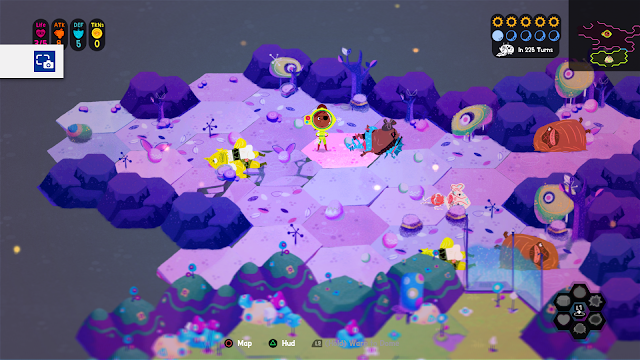 Outside of the tutorial, there are several different ways to play. A standard game will bring you to a randomly-generated world; it is here that I spent the most time, dying and restarting more times than I can count. Alternatively, a seeded game allows the player to input a specific alphanumerical sequence to obtain a specifically generated level. I expected to spend more time in this area than I did, as I normally crave control and a specific seed would give me that level of stability I enjoy. But the chaos in Loot Rascals is more beautiful that any control I can try to interject, and so the seeded game option remains mostly untouched, along with the unwanted practice option (I’d rather just learn from my mistakes in the standard game, thank you very much). The daily challenge was added soon after I began playing, and offers the player one chance at the same one level that everyone else tries on said day. It turns out I’m not nearly as terrible as I thought I was at the game, knowledge I gained thanks the one leaderboard I’ve actually cared about in a game in recent memory.

The aim of the game is easy: escape from the dungeon you’re stuck in. You have a set number of turns to escape. Moving to a new tile takes a turn. Each day and night consists of a precise number of turns. Your enemies weaknesses appear and disappear over varying numbers of turns. Turns are all that matters. Well, aside from life — yes, I suppose life quite matters. Your character begins with a set amount of life, for example 5/5, that will increase or decrease depending on the damage you take or cards you play. Combining this all together creates a game that’s an unpredictable chess game of sorts. You have to keep your eye on every little detail, and if you miss out you may be kaput. And nobody wants to die after all that work and no save files.

That’s right. No save files. You’re probably not gasping, Reader, but I certainly did at first. In this day and age it’s unheard of to not allow one the chance to save a game at least on occasion. What is this, the 1980s again?! Then I began to play Loot Rascals, and the lack of a save system made sense. For once, I died so often I had very little use for it: whenever I was considering a break and I’d die, there was my chance with no need to save. The lack of save slots just increased my addiction to and the difficulty of the game. At this point, it’s safe to say I was wondering why I was so happy. Seriously, why would I keep happily returning to a game that’s as hard as obsidian? It must be the “it” factor. I would label it as “je ne sais quoi” but I know exactly what it is. Loot Rascals strikes the perfect balance between light storytelling, a world with one heck of a wacky colour palette, deck building, and the randomness that is randomly-generated dungeons. 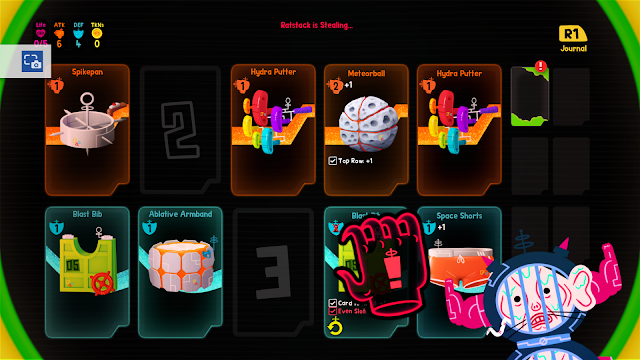 Deck building is perhaps the most important element in the game, and the one of which the player has the most control over. Cards are dropped by enemies or otherwise randomly found. Your deck is limited to ten, but cards can be recycled for tokens that can turn into life points for the weak and weary. As with the other aspects of the game, there are several factors to a successful deck. Blue and orange cards must be balanced so that the attack doesn’t several outnumber the defence or vice versa — unless that’s your strategy, of course. Some cards have special abilities that will either help (such as adding on a certain number of points to a nearby card) or hurt (removing a number of points from a nearby card) the deck as a whole. Balance is key.

How would I describe Loot Rascals? It is a digital combination of an extremely difficult board game

and deck builder, combined with some zany creatures and topped off with some insane levels of difficulty. Perhaps it is the requirement of balance that made me love a game with such randomness behind it, as balancing my turns or the cards made me feel powerful in a world of beautiful chaos. I think Loot Rascals actually taught me something, which isn’t something I say often about video games.