I don’t think there’s any theme as over-explored in science fiction than the “dangers” of technological ubiquity. From the robot uprisings of Terminator, to ethical dilemmas around augmentation in Orphan Black, to the surveillance hysteria of Watch Dogs, “technology will screw up our lives” is a message that’s been all and truly canvassed.

That puts a game like Divide in a difficult position. It’s a sci-fi thriller that hits all the familiar notes: a John Everyman protagonist who’s thrust into a fight for survival against his will; a futuristic, technocratic society where surveillance is ever-present and most people are blissfully ignorant; a luddistic resistance movement for enlightened souls who can live without the convenience of technology. Divide’s story is full of exciting twists and interesting tech, but it doesn’t say anything that hasn’t been said a thousand times before.

The way it says what has to say, though, is where Divide gets fascinating – not through plot, but in the design of the world and the way players interact with it. In this world, augmented reality is king; without AR lenses, you can’t even do something as simple as read a sign or building directory. As such, exploring the game’s world and solving the puzzles or presents you with requires a focus on the AR overlay and the information found within it. 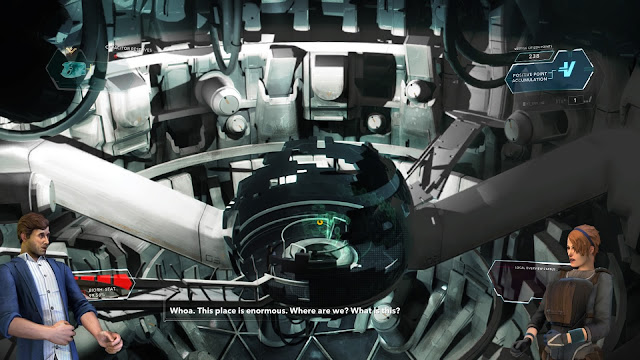 That’s something you have to forcibly do. It’s not just there, as part of the environment; you have to direct where your character is looking with the right analog stick, and watch the AR display fade into view. By extension, you can also ignore the AR entirely. You won’t get very far, as is the core component of the game’s puzzles, but on a mechanical level, you can decline to use this entrenched technology by not moving the right stick.

The result of this is an eerily powerful vision of a society in thrall to technology. It’s not just something that’s there as part of the art design, but something you have to engage with on a fundamental level. You can see and feel the futility of railing against technology with every stick movement. (As an aside, it’s also a clever way of using the game medium’s inherent dissonance between agency and determinism).

With the AR view being key to the game, it’s easy to fall into a habit of just constantly having the right stick on tilt. Like a twin-stick shooter conditions you to always have your guns pointed forward, ready to fire, Divide encourages you to always have your AR view looking ahead, scouting for relevant information. It gets to a point where that’s all you see, really; the physical world becomes an illusion, and augmented reality becomes reality. 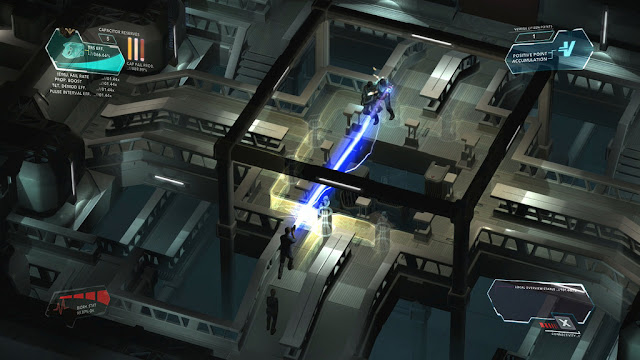 Divide’s world isn’t exactly a beautiful one, but there’s a sense of authenticity to it that’s easy to overlook when you’re focused on the AR sensory overload. This feels deliberate, and the point it makes us clear: an obsession with technology is making the “real” world redundant. I must admit, this is a philosophy I take issue with. Stories like this almost always focus on the threats posed by technological advance with a sort of evangelical luddism – like folks who complain about “antisocial millennials who are always in their smart phones”. It’s important to ask questions about the societal impact of developing technologies, but it seems all too easy for these sorts of stories to be blind to the unquestionable benefits.

Divide is no exception, and the brilliance with which it sells is core idea makes that oversight all the more apparent. For all the game’s hand-wringing, the technology in place seems incredibly convenient and useful, corporate conspiracy notwithstanding; were they available, I’d jump at the chance to get Divide-style augmented reality lenses. The game is great at looking the dark side of technology, but just takes it as a given that the danger outweighs the benefits.

The other problem with Divide – and it feels like I’m saying this a lot, lately – is that, too often, it sets its lofty ambitions aside in order to be a “game”. At its best, Divide is all about exploring a strange facility, using AR information to solve puzzles, increase your clearance level, and get closer to the truth. Far too often, though, it interrupts this flow for a pointless resource-gathering minigame: you get to a command centre where, in order to progress, you need to collect “hashes” by hacking terminals. This involves aimlessly walking around an area, repeatedly hacking nodes (which cost hashes) to reach rooms with a greater supply of hashes, until eventually you have enough to go where you need to go. These pointless detours add nothing other than a tedious, mandatory distraction from what Divide does best. 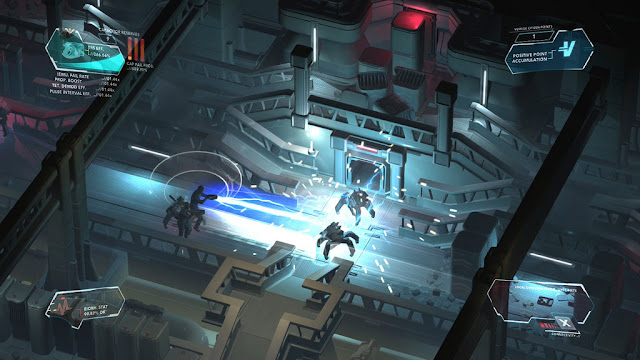 Combat is another area where the game struggles, though this is more avoidable, fortunately. Guard robots patrol the hallways and will attack on sight, but they can usually be snuck past or hacked into submission. If it does come to a firefight, though, you’re in trouble: your gun has a limited ammo supply, takes forever to reload, and has atrocious hit detection. Whether or not you actually land a hit seems to come down primarily to luck, and a missed shot is a death sentence. But like I said, combat can generally be avoided, and AI partners are great for cover fire.

These annoyances are worth putting up with, because Divide is a really good game when it’s playing to its strengths. It takes a familiar, played-out sci-fi story and uses mechanics and interactivity to give it a fresh, insightful spin. It’s not as nuanced a take as this sort of story needs, but you can’t argue with how well Divide’s approach works at its best.

The problem with realistic graphics in games