Horror game Perception coming to PS4 as well as PC

Horror lovers take note, as the upcoming game Perception by The Deep End Games is officially coming to PlayStation 4 as well as PC upon release. The Deep End Games is a developer created by former Dead Space and Bioshock developers, so you can bet these folks know what they are doing when it comes to the horror genre. Perception caught our interest mainly due to the heroine: Cassie is blind and uses her hearing to solve the mystery of an abandoned estate that haunts her.

So how does Cassie “see” if she’s blind? Using echolocation — but it comes at a cost, as the sound of her cane tap-tap-tapping will attract the very enemies she is trying to avoid. Once spotted, Cassie’s only option is to run, hide, and hope for the best.

Matt gave us a preview of the game from a demo he played at TGS 2016; you can read it here. The story is set 10 years after a colossal earthquake devastates Tokyo. A mysterious and lethal shadow world known as Eclipse emerged as a result of the disaster, and players must fight Eclipse forces to protect the newly rebuilt Moriyama City.

You will build relationships and forge alliances, and meet many eccentric personalities in your journey, as you unravel the secrets of Eclipse to find out the truth behind the mysterious shadow world. Tokyo Xanadu is a massive action RPG and the EX+ version of the game will offer a plethora of additional features including new monsters, dungeons, modes and a new playable character: the White Shroud.

Little Nightmares Out in April, with Collector’s Edition

Puzzle-platforming horror game Little Nightmares is promising to be one of the creepiest games in the deluge of excellent titles for the first few months of 2017. Publisher Bandai Namco announced that Little Nightmares will release for PS4, Xbox One, and PC on April 28. Bandai Namco also revealed a Collector’s Edition for the title for either PS4 or Xbox One that includes the game, a 4″ figurine of the main character Six, the game’s soundtrack, a sticker page, and an exclusive poster featuring artwork (and creepy characters) from the game.

Swedish Tarsier Studios developed the game under the name Hunger for PS4, well over 2 years ago. Then Bandai Namco acquired the publishing rights in August of last year and expanded it to a multi-platform release. The game embraces an “interpretive” approach to storytelling; part of this is the complete lack of dialogue. This is designed to “ensure that the story of Little Nightmares exists in the world, not just a few expository cutscenes, ” said Senior Narrative Designer Dave Mervik. The studio has placed a lot of emphasis on exploration of the game’s setting “The Maw.” An exact time for game completion is therefore hard to gauge, but Mervik did divulge that the studio’s estimate is currently somewhere in the region of 6-8 hours for a playthrough. You can find Harvard’s preview of Little Nightmares here.

If you’ve not been following along with Dead or Alive Xtreme 3, then by way of update; ever since the game launched early last year, Koei Tecmo has been very active in keeping it updated with new costumes to buy and play dress-up with the girls.

And of course, because this is Dead or Alive Xtreme 3, these costumes tend to be… well, sexier than in the “proper” fighting game, Dead or Alive 5: Last Round. To make things even better, in recent months Koei has branched beyond the bikinis to give us various other fetish gear. Why these girls would wear these on the beach where sand would get everywhere is a debate for more rational minds; frankly, we love ’em. The latest update brings super-sexy police cosplay; the kind you’d like to see at a Halloween party, but only if it’s a Halloween party on the Next Top Model set, or some such. 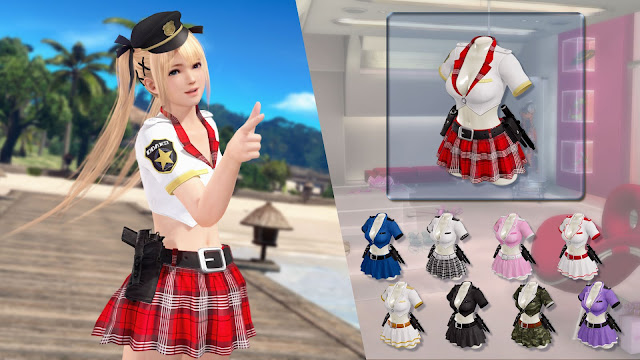 So, of course these costumes are outrageously sexualised and there’s all kinds of criticisms you can make of the game and its continued support on that basis, but it has obviously been a commercial hit for Koei, plenty of people love the game, and it shuts Matt up for a while, so we’re all good with that.

If you are interested in the game, and haven’t picked it up yet, you’ll need to import it, or buy it off the Hong Kong PlayStation Network, where it’s available in English. The game was never formally released into western territories (one suspects because Koei wasn’t overly interested in the inevitable criticism it would have copped from local critics in doing so).