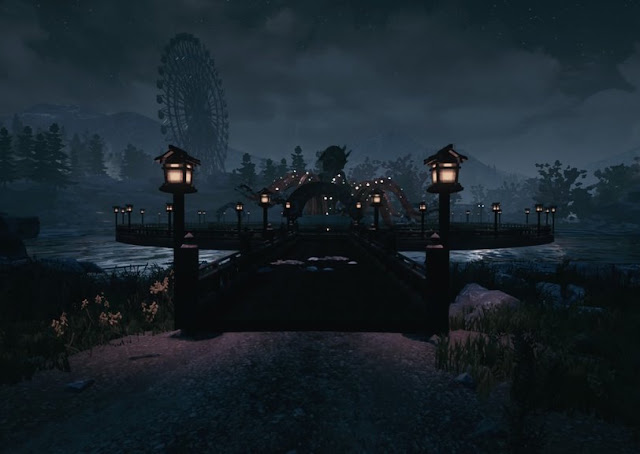 The Park is the scariest game I think I have ever played – though that isn’t exactly saying a lot because (a) I scare very, very easily, and (b) I don’t play a whole lot of horror games (see point a). Upon loading it up, you’re informed that this is “a narrative experience, best played in a dark room wearing headphones.” In the interests of a fair and balanced review, I tried this. I lasted about 10 minutes. I didn’t even get to any of overtly scary bits; the atmosphere alone was creepy enough that I quickly took a lights-on, no-headphones stance.

By the end of the game, playing was limited to 10-15 minute chunks, with the audio as low as was possible while still letting me hear, and in broad daylight only. Even then, my play was regularly interrupted by my wife in the other room checking I was okay, because all she could hear was me alternating between frightened profanities and pathetic whimpering.

What makes The Park’s terror so effective is that it strikes a near-perfect balance between three of the genre’s pillars: jump scares, atmosphere, and psychological horror. It’s hard to not feel uneasy as you explore the decrepit Atlantic Island Park, while shadows play tricks on you and the odd audiovisual distortion puts your nerves on edge – perfectly primed for a jump scare to cut through that tension. Some of these are the usual sudden appearance of something scary-looking accompanied by a loud noise, but the best (worst?) ones are those that you could easily miss. You think you see something at the edge of the screen, so you whip the camera around and suddenly, you’re looking into the piercing red eyes of Chad the Chipmunk. No noise, no sudden movements; he’s just sitting there – watching, waiting.

This then feeds back into the tense atmosphere of the game, as your mind starts playing tricks on you. Is that just a shadow or a shrubbery in your periphery, or is it Chad? Closer inspection reveals that, yes, it’s just a tree. But you’re sure you saw something – has it been a simple tree all along, or was the game getting up to its old tricks with blink-and-you’ll-miss-it scares? It gets to a point where you – as in the person playing the game, not the character within it – start questioning your own sanity and losing track of what is “real” within the game world and what you’ve just dreamed up.

Disturbing narrative elements add another layer on top of that, as you start to learn about the park through various objects you find along the way. Newspaper clippings tell of numerous fatal freak accidents within the park; diary entries reveal a staffer’s growing obsession with the Chad the Chipmunk costume; snippets of weird letters written by the park’s founder show a man who doesn’t care “if the children are more scared than excited on the roller coaster”.

And then there’s the story of Lorraine, a seemingly average mother who goes looking for her son, Callum, when he wanders into a theme park just after it has closed. However, there’s much more to Lorraine, and to her relationship with Callum, than first appearances would suggest. I don’t want to give away any specifics because it really is the type of plot that works best when you go in knowing as little as possible, but I will say that beneath that broader narrative, there are a whole bunch of micronarratives that show how masterfully the writers understand the horror genre. For example, The Park manages to retell Hansel and Gretel in way that is so disturbing and messed up that the Brothers Grimm version looks bright and cheery by comparison.

Which brings us to what makes The Park so interesting, beyond just being an underwear-stainingly scary game: on a superficial level, it’s about an abandoned, haunted theme park, but at its core it’s a tale of a single mother struggling to cope with her situation. Like Mary Shelley’s Frankenstein, and so many other stories since, it uses the framing of a monster story to explore the darkest recesses of the human condition.

It poses questions that we’re usually too afraid to ask. What drives a mother to hate her child? Is it even hate, or stress that’s been pushed past breaking point? What happens when someone falls through a hole in the safety net of welfare? What happens when, through this lack of support, someone starts to lose their grip on sanity? For many people, this is reality. It shouldn’t be, but it is, and the only way to start to address such social ills is to understand them; to get inside the mind of someone like Lorraine.

This is what makes The Park so important. All those horror tactics – the jump scares, the atmosphere, the way the game manipulates your perception – help make Lorraine’s situation relatable. They help make it understandable, perhaps not in an academic way, but in the sense of having some tiny snippet of experience of life for someone like Lorraine. It takes this concept to fantastical extremes, but the only difference between what The Park presents and what real life is like for millions of people the world over is one of intensity. 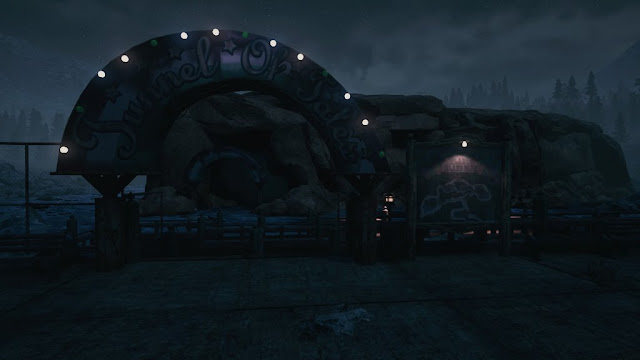 I know this because I have been there. For a large part of my childhood, it was just me and my mum. She was that gold-standard single parent, doing everything she could to provide with the pittance that passes for a teacher’s salary, and I was that textbook moody, ungrateful teen, making an already difficult situation far worse than it needed to be. Our situation didn’t come anywhere close to the level of Lorraine and Callum, but I have witnessed first-hand what life is like for a solo mother – the lack of social support, and the stress that comes that – and I think that’s why The Park resonated with me on such a deep level

Like I said at the start, The Park is an absolutely terrifying game, but what’s continued to haunt me about it long after I’ve put the controller down isn’t Chad the Chipmunk, or the Bogeyman, or the Witch – it’s how distressing and real the game and its themes are once you peel back those monster story trappings.

This week on the DDNet podcast: The horror genre, Doom, and that Assassin’s Creed film…