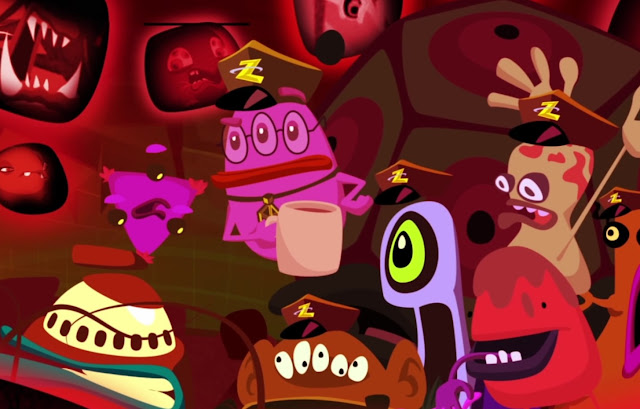 Ah, that difficult old beast that is comedy. One of the challenges in building a comedic game is that no one has the same sense of humour, and what is funny to one person (or group of people) is not necessarily funny to another. Worse, if a comedy isn’t funny, what’s left? Not a whole lot, often.

So for this review I thought we could do an experiment. We’ll take Schrodinger’s Cat and the Raiders of the Lost Quark, and we’ll put it in a box. Then we’ll figure out if I find it funny or not. Without actually looking inside the box or playing it. Aside from my absolutely terrible pun on the Schrodinger’s box mind puzzle, I actually wish I could do that, because the game isn’t as funny as it wants to be and I tired of it quickly.

Actually, that’s disingenuous of me. Schrodinger’s Cat isn’t actually bad. It’s just pitched at a certain kind of person with a specific sense of humour. That’s not me. Aside from that sense of humour, though, it is a fairly simple, but decently clever puzzle platformer in which players need to navigate their purple cat thing (Schrodinger’s Cat) over, across, and through a range of different obstacles by manipulating four different little “particles” that he will pick up along the way. These particles each have a different ability built into them, and by combining any three of them, the cat has at his fingertips a massive range of skills to play with. One combination will create a platform that the cat can jump onto to reach higher areas. Another combination will allow the cat to pass a gelatinous poison without taking damage. Yet another combination will allow the cat to throw a projectile. 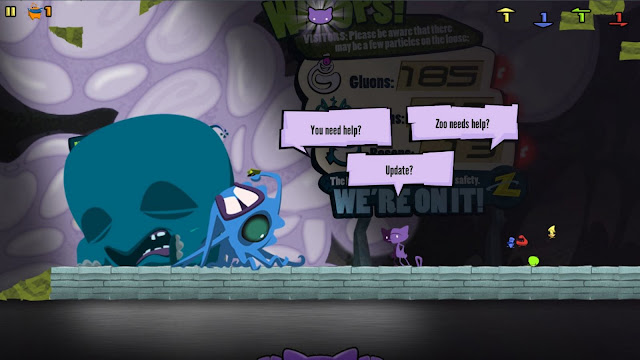 The most appropriate comparison I can make of the game is to that classic A Boy And His Blob, in which the lead character himself wasn’t overly useful, but the blob companion would allow him to reach otherwise impossible areas, and navigate past deadly traps and the like. The particles of Schrodinger’s Cat work in much the same way. If you enjoyed A Boy And His Blob (and as rare as the game is, the Wii remake by WayForward is absolutely essential), then you’ll enjoy the basic premise of this game.

As the cat navigates about the place he needs to stun and then capture a bunch of nasty monster-things that have escaped an extraterrestial prison and are wreaking havoc. He needs to use the aforementioned particles to navigate over to them, then stun them, and then use a third ability to catch them. This process can expands a lot of particles (because each particle can only be used once before it disappears), so the cat also needs to scour the landscape to find enough of the specific kinds of particles that he needs in order to capture all the alien monster things that he’s tasked with tracking down.

As a puzzle platformer it’s not always an easy task. Indeed, for a game that features such bright colours and a plot ripped directly from children’s Sunday morning cartoons (we’ll get to those in a moment), I found Schrondinger’s Cat to be a stiff enough challenge to stump me for a time in more than a few areas. The puzzles are logical enough that I didn’t need to twist my brain to the point where it hurt to figure out the solution, but at the same time, the developers did just enough with the base mechanical structure to force me to think creatively to reach some of the more difficult areas in each level. There’s some random elements in there too, with a lot of the levels being procedurally generated, which keeps the variety of the game strong, but also results in layouts that are too uninspired or obnoxious for their own good. Younger kids might well find this frustrating, through, so thankfully checkpointing is fairly frequent, and there’s always GameFAQs after that. 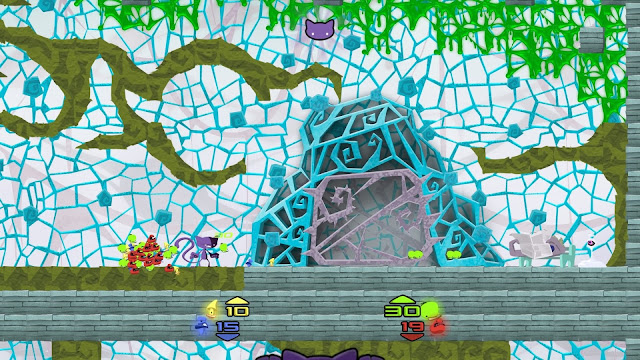 But despite being such a solid base game, I’ll never think of Schrodinger’s Cat as a masterpiece, not because of the mechanics, nor the clever and interesting level design. Schrodinger’s Cat became a real slog for me because it failed spectacularly to make me laugh. This game offers a laboured kind of humour – the kind of overt puns and visual gags that you’d witness on the current format of children’s Sunday morning cartoons, and it’s got the lot of those, from the terrible wordplay, to the completely over-the-top voice actors. It’s bright, bubbly, and silly (and occasionally sickeningly garish), but it’s also limited and meaningless, and I struggled to remember a single joke after putting the controller down.

I do say this as someone who prefers satire or ironic commentary, of course. As I mentioned at the top of the review, what is funny varies from one person to the next, and where I get my kicks from a more “serious” and adult kind of humour, I don’t mean to suggest that this game won’t have value to other players. In fact, I know there are loads of people that will find this game deeply funny, and power to them. If you’re able to connect with the humour, then Schrodinger’s Cat obviously escalates in value to something close to ‘must-have.’

But to go back to my original question; what is left when you’re playing a humour game that you’re not finding very funny? A very competent, but ultimately unremarkable game in this case. In terms of scoring Schrodinger’s Cat and the Raiders of the Lost Quark, it’s a tough one, because it’s one of those odd games where I can see where its appeal would lie for others, but on a personal level, like the most boring of science experiments, I struggled to stay awake through it.

The Sunday screenshot gallery; May 31