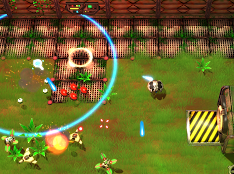 Namco and Brain Slap Studio’s Hexodius bolts a hex-based overworld onto a would-be fast paced, spaceship shooter, but does it work?

Well, the answer is both ‘yes and no’. There’s actually a lot to like about this little blast-a-thon, but it gets weighed down by the non-meat and potatoes stuff for an experience that can be a little bit of a drag. It’s not that Hexodius is a bad game by any means, it’s just the case that it could have been so much better if the gameplay was better defined.

Forget about the narrative, because it’s pretty simple stuff that’s honestly not why you’d play a game like this anyway. Just to fill you in (as quickly as possible), you pilot a small ship through some robot infested arenas. Hexodius actually reminded me a little of Wall-E since everyone’s a bot, including your enemy (a nasty, rogue A.I.) and your guide, who can actually be quite funny at times.

Minimal story aside though, Hexodius is all about the gameplay and fortunately enough it’s pretty good. Basically you pilot your craft around a landscape that’s built on arenas. Each arena (or shop, or save point/repair station…) is defined by a hexagonal shape, hence the name. You simply fly up to one to launch into the mission or upgrade shop. 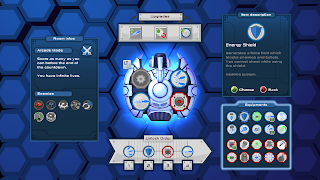 The overworld plays out almost like a board game in some respects- only instead of landing on a square and picking a card, you fly into a hex and play a level. It’s pretty fun and breaks up the monotony of the simple mechanics that developer Brain Slap Studios has grafted onto the game.

There are only a scant few mission-types and Hexodius repeats them into infinity with only that hexagonal map to change things up as you play. The actual arena-play is reminiscent of Geometry Wars, but not nearly as fast or frantic. You won’t be burning up the screen in a bullet-hell type romp and, even when things do get tense in Hexodius, it’s never something you feel like you’re on the edge of crashing and burning with- even when you are.

Fortunately the controls are easy as pie with one stick controlling your flight and one shooting in standard twin-stick fashion. You can also load up your craft with special weaponry purchased at those aforementioned shops. This definitely adds a little spice to the gameplay as you can outfit yourself with things like a gun station to vary the combat. It’s nothing cutting edge though and definitely nothing that hasn’t been done before. 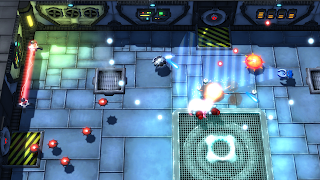 I did like the look and sound of Hexodius though. It’s simple and (once again) not groundbreaking in any way for the genre, but the clean and sharp looks of the stages and the nice clear (and easy to navigate) overworld are plusses here. Likewise, the music has a kind of old school (almost 16-bit style) feel to it and compliments the play nicely. It’s perky, nothing dramatic, and it works well. I was a little off-put by the lack of vocal work here as everything is text-based with some computer noises subbing for actors. It is fitting with the vintage feel though, so maybe that’s what they were going for?

There’s a lot to find fault with here, not in the mechanics so much as with the overall design of the game. Hexodius isn’t ‘broken’ by any means though and there is a decent amount of fun to be had with it. Boredom sets in when played in long stretches, more because of the lack of varied environs than anything else, and it certainly isn’t something that you’ll happily get lost in the way Geometry Wars was- but it does have its charm.

I found myself enjoying the game a lot more than I thought I would and that’s got to count for something. So no, this isn’t a ringing endorsement, but if you’re looking for a little shooting diversion; you actually could do a lot worse than Hexodius. Just don’t expect it to be shooter heaven… or bullet-hell of any kind.

Interview: Slitherine Director on the trials and opportunities for niche publishers