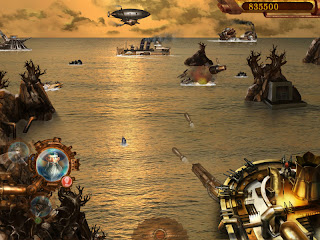 Admiral Nemo frustrates me.
There’s nothing particularly off about the game. The player advances in a linear level-based fashion, purchases upgrades with in-game currency, and is awarded that currency for how well they perform in levels. It’s very standard stuff for video game design.
Here is my hang-up; Admiral Nemo is the equivalent of a pretty shooting gallery crammed into another game.
The game starts off with a simple story explaining the basics; the empire has fallen and the player is put in control of its last battleship. To restore the empire, the player has to spend gold (acquired from beating levels) to restore specific aspects of the empire, which in turn gives the player’s battleship upgrades. It is not a bad set-up, but all of these things are fluff compared to the heart of the game, the gameplay.
But that heart is a shooting gallery. At first I was mildly pleased about it; the ship designs/ship graphics are nice and the shooting gallery gameplay could fit well into a series of smaller games that are evenly spread out among the overall package. But then I realised that the main gameplay hook is solely the shooting gallery and nothing else. This is where the problems started to occur. 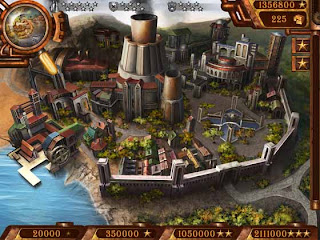 Firstly, nothing recognisable happens upon advancing in levels nor upgrading. Oh yes, there may be an island or two that prevent you from firing down one or two ships in the certain parts of a level, but just as a shooting gallery the ships don’t have any effect if they cross from one side of the screen to another. Enemy ships appear to travel at the same pace throughout the entirety of the game, the time you have to shoot down ships does not visibly waver, and there is no randomness to any of the game. There is no incentive for me or anyone else to shoot down any ships or advance in any way other than for the sake of an arbitrary progression from one level to the next.
This is not helped by the fact that shooting gallery gameplay is not worthy of sustaining a full product. The player will have to manage switching between water-based and air-based projectiles and there are a few power-ups, but the overall goal does not change; shoot down the enemy craft. There is a small mine-dropping minigame, but it is so far spread-out in-between the shooting galleries that it is truly a minigame.
The problem with this game is that its thin content is spread over such a long distance that the game is not worth trekking through everything to complete it. I have only progressed halfway through this game and I just can’t bear myself to deal with the other half, as I just can’t convince myself that the second half will be markedly different. The art style is nice to look at and the music is decent, but the core of this game is just mind-numbing in its dullness.

Interview: The indie making a PC and tablet RPG out of paper (literally)

Friday 10s: The must-play western RPGs this generation (on consoles)