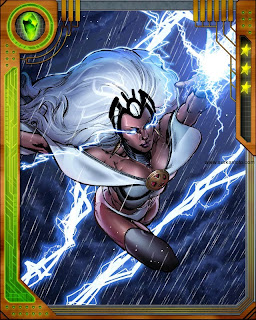 Marvel: War of Heroes took the tried and true formula that Mobage used for Rage of Bahamut and has run with it over the last few months with a good deal of success. Right now they are celebrating over 1 million users, and that alone if you log in regularly over the course of the week can get you some cool goodies including a decent card.

On top of that, there is an X-Men themed event running until the 24th of this month (I will be curious to see if there is a Christmas or New Year themed event they run right afterward. If so, I will let you know).

In the event you go through a new storyline mission with your energy collecting cards and silver like you normally would, but there are also chance encounters with bosses (either Juggernaut or Magneto) along the way that help you build up your ranking. At the end of this event, there are some pretty decent prizes that will be handed out.

Events like this are not uncommon in collectible card games of this nature (Rage of Bahamut has them pretty frequently, just having ended a Holy War with a new event coming up soon called Not-So-Silent Night). I was a fan of Marvel: War of Heroes when it released and still play it daily. If you are interested in more information about the game, you can see the review here.

Also, if you are a new player, feel free to plug in my referral code. Note that it is case sensitive, but it helps you get off to a quicker start than it would if you did not use one at all and feel free to look me up there as well. Here is the code:

Digitally Downloaded is on holidays