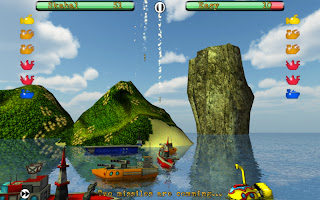 Battleship is the perfect game for the iOS platform. It’s easy to pick up and play for short bursts of fun, and it’s easy to design a multiplayer experience around it.

There’s been a few attempts at making Battleship games for the platform, as you’d expect. None are as good as Ships ‘N Battles. I’m honestly amazed at how much I enjoyed this game, given that it really is not much more than a basic Battleship game.

The key is probably in the presentation. There’s a gorgeous 3D art style to this game which, coupled with a surprisingly intelligent soundtrack, builds a nicely intense mood. From the loud, powerful explosions as missiles connect with ships to the camera angle as the enemy return fire comes in, never quite certain what it’s going to hit before it lands, there’s a bit creative excitement about a game that is usually quite a dull experience. 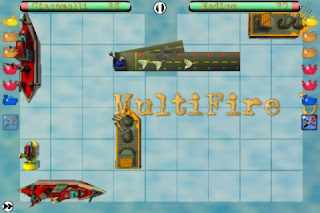 That visual style is backed up by some intelligent additions to the basic Battleship formula. Each level is strewn with both offensive and defensive powerups. The random nature with which you’ll earn these will occasionally illicit a feeling that the game is cheating you – especially against the difficult AI settings – but in multiplayer and the lower difficulty levels this helps add a new strategic dimension to the game. Where do you place that shield you just picked up? Do you use the dual-rocket powerup, which you can’t control, or just launch the one rocket but select the square it targets? While just about anything that helps break up Battleship beyond a game of picking squares, the balance of this game’s powerups are just right to introduce genuinely interesting variations to the basic game.

The developers have gone above and beyond to give people the ability to play with one another, too. There’s cross-platform multiplayer that even extends to iOS device/ Mac computer and Android, and there’s a multitude of different ways to get a game going, from Bluetooth to the usual bevvy of online options.

It might be a basic Battleship game with some nice bells-and-whistles, but Ships ‘N Battles does a good job of turning the basic game into something that is fun and engaging for the iOS platform. Congratulations to the development team for this one.