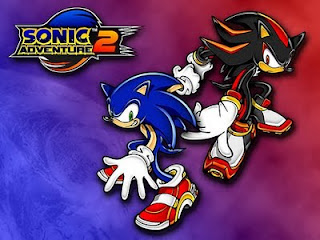 One of Sonic’s more popular titles in the second half of his lifespan was Sonic Adventure 2, originally released on the Sega Dreamcast. Its prequel has already been re-released digitally on the Xbox Live Arcade and the PlayStation Network services, but it’s looking more and more possible that Adventure 2 will pop up as well.

This not-quite-announcement has been a long time coming. Originally appearing on a leaked list of upcoming Xbox Live titles back in April, the list didn’t appear to be particularly legitimate. That changed when another game on the list, Rock Band Blitz, was officially announced by Harmonix shortly after appearing on said list. A little over a month later, Sonic Adventure 2 avatar items showed up in Major Nelson’s upcoming release list before being removed.

Today, the rumour reached new heights of possible legitimacy: a page for the game showed up on the Xbox Live Marketplace. Those of you with good memories may remember that the original Sonic Adventure was also leaked prior to its formal announcement. According to the now-removed page, Sonic Adventure 2 is slated for a release on October 3rd later this year. This could change, naturally, since the avatar items that were supposed to appear earlier this month around E3 yet were mysteriously delayed. 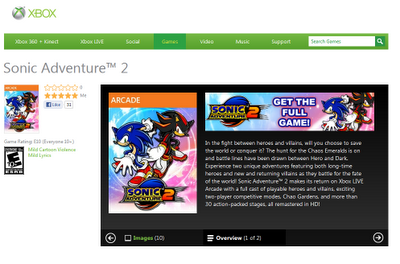 Assuming the removed page was not an elaborate decoy by Sega employees, you can expect that the content from the re-release, Sonic Adventure 2: Battle, will also be available digitally. The page’s description showed off Chao Karate, which was a mode only available in Battle. You can check out more of the potential details here.

While PSN support was not formally revealed, a screenshot shows the circle button of the PlayStation 3’s DualShock 3 controller. 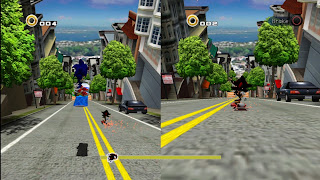 There are a couple of other minor points of interest. The page featured an ESRB rating rather than the standard “rating pending” that normally appears for games that do not release for months. Additionally, this rating is E10+, rather than the E rating the original two releases received. It is also somewhat strange that a screenshot for the PlayStation Network version would be on the Xbox page, but Sega has a dubious track record that includes countless game leaks and unintentionally using fan art without permission due to internal problems. This could be yet another internal issue or perhaps even the reason for the page’s removal.

If this leak turns out to have substance and the author of this article does not kick the bucket, you can expect a full review around the time of the game’s release.