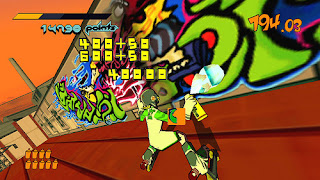 Jet Set Radio is the latest in Sega’s line of Dreamcast ports. This one, however, is shaping up to be far less of a port than other the titles that have made the jump to the PlayStation Network, Steam, and Xbox Live Arcade so far.

For one thing, it’s going to be genuinely HD. Sonic Adventure had a blue border wrapped around its square self and was merely up-scaled from 480p, but you won’t be seeing any of that here. Take a gander at the two new screenshots above and below.

It was also confirmed that a PlayStation Vita version is in the works. It boasts several exclusive features such as camera support and the ability to use the touch screen to draw graffiti. Whether or not it will feature cross-platform play ala MotorStorm RC is unknown at this point, however. All of the content present in the console versions will be intact, as Sega’s blog post says:

“Jet Set Radio for PlayStation Vita is a handheld version that loses nothing in the way of content or experience in comparison with its console and PC brethren”.

With regards to the game’s soundtrack, fans of the original music can now rest easy. The game will retain all of its songs (or at least “the original funky soundtrack”), licensing issues be darned.

The game is slated for a release on PSN and XBLA at some point during the summer. At the risk of making pointless speculation, the original game was first released on June 29th. Think of that what you will. 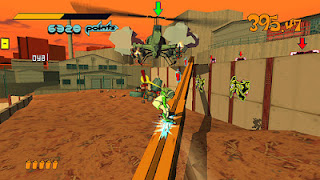