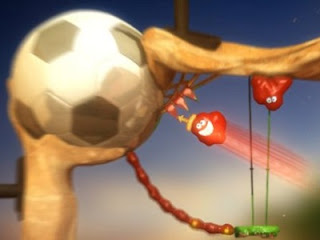 The Splatters is what happens when you take Angry Birds, and flesh it out into a more “true” console game experience. It’s a whole lot of fun, but like many of those that have tried to take the Angry Birds clone, it’s hard to shake the feeling that it just falls short of recapturing the magic.

But where The Splatters takes things to an entirely different level is when it comes to scoring. Points are awarded by how stylish you are in using the living missiles to destroy stuff. It’s possible to be stylish in a number of ways but the controls are kept comfortably simple so the game remains accessible. With a bit of practice just about everyone will be able to pull off the more complex tricks, with the only barrier then being the requirement to have a good sense of timing and aiming precision. There’s a real thrill involved in sending a Splatter screaming around a smooth wall, bouncing him off a wall at the opposite side of the playing field, and then smacking him into the ceiling to cause a destructive rain to fall down on the destructible crystals underneath, and getting to that point is a well worthwhile pursuit. 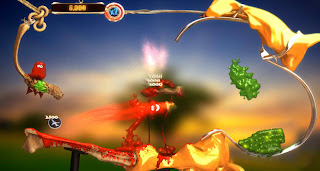 Levels are creatively designed to act as virtual playgrounds for the destructive imagination. Completing these levels is usually a straightforward matter, and so for people that don’t care about top scores and the likes the game is likely to be over far, far too quickly. Getting those high scores and medals is a whole other matter, though, and the idea of turning stylish movement and simple physics into a puzzle game has rarely been done as well as it has here.

The biggest coup for the game is that the high score leaderboard doesn’t just include a comparatively dull number on it; it features videos of people who have hit those massive numbers. Spending five minutes watching these videos is in a weird way inspirational as there are already people playing the game who are true masters of its structure and their use of the environments and the Splatters has a weird majesty to it. Like a speed run of Super Mario Brothers the pixel perfect use of a limited range of input options demonstrates an uncomplicated mastery that anyone can appreciate. Being good at The Splatters requires skills that are far more accessible than, say, Call of Duty or a Street Fighter game, and so it’s easier to set yourself the challenge of being up there on that leaderboard with this game. 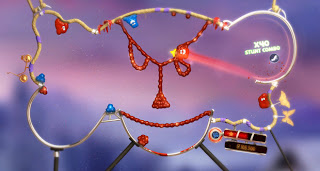 The real criticism I have with this game is how protracted individual levels can become when shooting for those top scores. The limited range of inputs means there’s an over reliance on some tricks in order to boost scores. Limited inputs works fine with a game like Angry Birds where a level is over in under a minute. With The Splatters, it’s entirely possible to be playing the one level for over five minutes repeating the same actions again and again. A slight mistake will put the maximum score out of reach and at that point there’s little to do than restart. As the charm of the game’s energy and colour starts to wear thing, the repetitive actions over protracted periods of in-game time can grow to be tiring.

As an attempt to take the simplicity of Angry Birds, and infuse just enough “game” into it to attract console owners, The Splatters is an admirable effort. The pacing is off, yes, but at the same time people are more patient when playing console games than on the iPad or handhelds, so it’s still worth a look.

A mind-blowing piece on the failings of Kickstarter