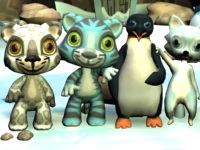 The 80’s. The golden age of the arcade games, where youths wasted many hours and quarters playing the latest releases such as Arkanoid, Pac-Man and Space Invaders. It’s from this age that Strawdog Studios has found the inspiration for its newest title Space Ark, where you play as a team of animals called the Arkonauts, who’ve set out to repair the worlds of the solar system that were ravaged by a black hole. While it comes off rather well, it’s not exactly a must-have.

The game comprises of three different modes. The main adventure comes under Mission mode, where you can choose one of four different Arkonauts to play as, each with their own set of stages for the different worlds. In each stage, you’re primary aim is to collect all DNA blocks which appear across the screen and the exit will open up. 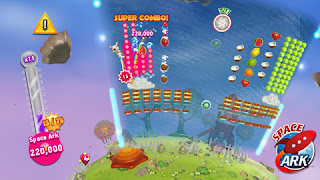 If you collect multiple blocks at once, you’ll build up combos which bags you more points and helps achieve your combo target, although this only applies when you multiple blocks of the same colour. Fruit is also scattered throughout these stages that build up your Super Meter, which multiplies your score and the more fruit you pick up, the more your score gets multiplied.

The game will also grant you various measures to assist you, such as power-ups like shields and guns, which are quite handy at times. On top of this well also find a set of letters scattered across the stages spelling the word “BONUS”, and if you obtain them all then you’ll get taken to a Bonus stage which all you do is collect falling fruit, a nice little extra.

After beating a stage, you can earn points bonuses depending on factors such as your combo bonus, how many lives you had left and more. Once you’ve gone through your Arkonaut’s set of stages, you’ll then be given an award based on your overall score in the form of a Gold, Silver and Bronze trophy system. While the ranking system helps add re-playability, once you start getting multipliers as high as x20-30, that value diminishes as it becomes all too easy to get those Gold rankings. 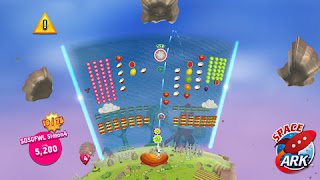 On top of this, upon beating these stages, they will then become available in Time Attack, where you simply collect the DNA Blocks as quickly as possible and Survival mode, where you try to build up as many fruit combos as possible to increase your timer or it’s game over. While both of these modes help to keep the game more interesting, they feel more like side-attractions and won’t hold your interest for long, although they do at least present more of a challenge than the mission mode.

To control your Arkonaut, there are two separate ways of going about this. You first have the bounce pad, controlled using the arrow keys and if you fail to catch it when it lands, you lose a life. You also lose your combos but they aren’t particularly hard to get back, since they simply become scattered as pickups and you can regain them by catching them. You can also control your Arkonaut to a degree whilst in midair, through use of the W, A, S & D buttons. This proves to be one of the biggest issues with the game, as using two sets of controls at once for the Arkonaut and the bounce pad can make it slightly disorientating to play. 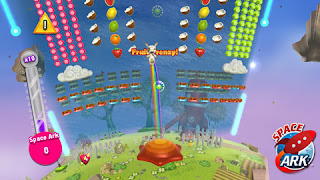 It’s a good game at times, but it has a couple of faults. While the gameplay is usually quite enjoyable and good for short bursts of play time, it feels repetitive after long periods of play and in all honesty, it’s not much of a challenge to defeat the stages. Your scores are also uploaded onto the online leaderboards, which will be a welcome addition for high-score gamers.

It’s also not the prettiest game going but the game does sport a colourful art style. With vivid, cutesy 3D graphics, Strawdog Studios have done a good job of bringing life to this title. That’s complimented by the soundtrack, which does a nice job of fitting in with the retro arcade atmosphere of the game.

Overall, while Space Ark doesn’t fully capture the magic of the games it was inspired by Strawdog Studios have managed to present a rather enjoyable experience. It may be hindered by some gameplay issues but overall, it comes recommended.