When I was offered the opportunity to review MacGuffin’s Curse, I decided to look it up and do a little research. The first thing I learned was that it was a game where the main character could transform into a werewolf. It was at that point that I volunteered for the review because what more do you need? The fact that it actually turned out to be an entertaining game was a nice bonus, though.

MacGuffin’s Curse casts you as Lucas MacGuffin (yes, seriously), an ex-magician who has been reduced to burglary for a reason that any one of us can understand: his landlord forces him to do it in order to pay rent. The latest heist is to break into the Museum of Myths and Mysteries to steal the Lupine Twine Amulet, a rare artifact recently donated to the museum. During the heist, MacGuffin sets off the alarms and dons the amulet in a panic, only to find that it immediately turns him into a werewolf.
Now with the city-wide security system activated, the amulet stuck around his neck and multiple people wanting to get their hands on it (and, by extension, him), MacGuffin must use his wits and the mystical powers of the amulet to find a way to confront Alphonse Connell – the corrupt millionaire who donated the exhibit – and get him to remove the amulet. 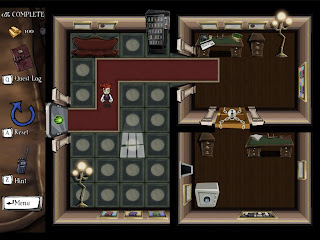 The premise is pretty stellar stuff, in my opinion, and the story is told in a way that makes you care about the goal at hand. Of course, if you knew nothing else about the game, reading the premise would immediately conjure images of classic adventure or role-playing games. Thus, when you discover that the gameplay consists largely (read: almost entirely) of block-pushing puzzles, there’s an interesting disparity between the concepts.

While the main gameplay is, as mentioned, purely block-pushing puzzles, there are large numbers of people to talk with, some of which give you quests (some main, some side-) that progress the story. Sure, the way you complete those quests is by completing even more block puzzles but this game ends up being as much of an adventure game/RPG as any of the classics. It’s a very interesting concept by Brawsome, the company behind the game, one that I’m actually quite fond of.
Now, as with any genre-bending title, the natural worry is that one component was focused on and the rest were simply ignored, resulting in a rather lopsided effort. But Brawsome obviously did their homework in that regard as each component of MacGuffin’s Curse is smooth and well-balanced.
The game mechanics are very solid and clever. Though at first MacGuffin is unwillingly changed into a werewolf, you are quickly taught that he can switch back and forth at will, permitting he stands in direct moonlight. This creates an additional aspect of the puzzling as each form can perform certain tasks that the other cannot. For instance, Lucas’ human form can perform intricate tasks like cracking safes or opening electronic doors, while the werewolf form can utilize his brute strength to push and pull boxes and swipe away piles of debris that might block your path. This interesting duality becomes the main component of the puzzling, as you have to figure out how to complete tasks that might require the abilities of both forms.
The artistic direction of the game seems to combine elements of the classic fairy tales with a film noir-esque feeling, which creates a very interesting style. It reminds me of the classic Fables graphic novel series (in concept, anyway), a comparison furthered by the series of unlockable comic pages that seem to serve as a prequel to the game, showing events that happen before and during the opening of the game. It’s an interesting aspect that keeps you searching the corners of every map, looking for the next panel of the comic to further unlock the story behind the game.
My only real complaint about the game is that the sound direction leaves a bit to be desired. The sound effects and music are suitable but the complete lack of voice acting seems an odd choice in today’s market. While I can appreciate the desire to tap into the roots of point-and-click adventure games, which were largely comprised of text as dialogue, it seems a step backwards.
With point-and-click adventures making something of a comeback in recent years, the reason they have done so well is largely in part to the way they have been modernized for our era. Recent games like The Blackwell Legacy series, Syberia, and even last year’s Gemini Rue are all great examples of classic point-and-click adventure games that feature voice acting to more convincingly convey the plot.
For games that rely entirely on the story to engage players (as gameplay in point-and-click’s can occasionally become frustrating and tedious), this sort of upgrade is necessary to appeal to the modern market. I feel that the lack of voice acting in MacGuffin’s Curse is a major downfall of the game; with so many interesting characters, it would’ve been splendid to hear them brought to life by actors who I’m sure would’ve had a ball portraying them.
Still, the game remains an entertaining diversion: the puzzling is intelligent, and only just difficult enough to give a sense of satisfaction for completing one; the story may seem a bit cheesy but is ultimately fairly clever and unique; and the art and sound direction are spot-on, with the exception of the lack of voice acting.
If you like fantasy creatures, film noir stylings and block-pushing puzzles, this is definitely the game for you.

Marvel vs Capcom 2 takes iOS for a ride