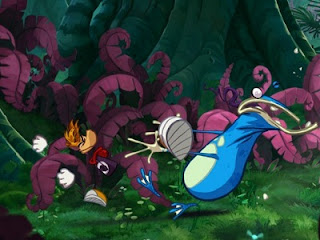 I tell my journalists that swearing when writing a review is not appropriate. Which makes it very difficult to describe my true feelings for Rayman Origins. But it is… freaking… incredible.

Everything about the game screams care and commitment to genuinely getting back to the core values that make 2D platforming entertaining. This is a challenging game without being frustrating. This is a game filled with vibrant personality and innocent charm; it doesn’t need to be dark, or violent, or even have a real plot. It’s enough to be bounding through the landscape finding new nooks and crannies to explore.

To start with the animation – this is the best animation in a game. Ever. Every last pixel of Rayman & Co’s movement has been captured perfectly in the kind of wacky over-the-top style of Loony Tunes and Disney before both started to fall to bits. That style marries perfectly with the music, which is painfully addictive and charming by equal measures, and while it would be a push to say this is a soundtrack that would be worth owning as a stand-alone product, this is one game that you’ll play with the earphones in and the volume right up. 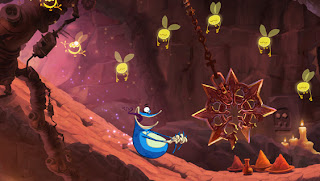 The gameplay itself is very reminiscent of the 2D Rayman lineage. The goal is to move through environments that are not entirely linear, and seek out boxes of captured Lums to rescue. That’s how the game measures your success, and it’s likely that you’ll need to revisit levels many multiples of times to explore it fully enough to find the really well hidden goodies.

The traps and enemies that Rayman faces are as devilishly well-positioned as ever. Make no mistake, this game is a challenge, as all previous Rayman games were challenges, and calls right to mind the pure difficulty of the NES and SNES-era platforming games. It’s perhaps a little more puzzle orientated than people weaned on the likes of Mario would be used to, and so it also tends to be a little slower-paced. There’s no timer counting down and you’re encouraged to explore around a problem when it presents itself. 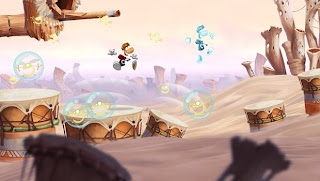 That’s not to say the fine folks at Ubisoft haven’t created a modern game, though. Rayman Origins has a few new ideas thrown into the mix, and they’re all for the better. One is the removal of lives. There’s no threat of a ‘Game Over’ screen, and this achieves a number of really nice outcomes. Firstly, it means the game is no longer frustrating. When there’s no more than a few minutes of lost time as a consequence for death, there’s little distress in dusting yourself off for another crack at a level. The level design is also structured in a way that, even if you’re unable to navigate the gauntlet for an especially tantalising prize, it’s relatively easy to bypass it and get to the end of the level to progress, saving the hard goals for later on.

Secondly, the lack of death serves as an even greater incentive to explore, and simply have fun in Rayman’s world. As a reward for performing well, additional characters are unlocked at a fairly quick clip. This characters come with some slight variances, and are not always superior to other characters, but thanks to the personality and game-over-free structure of the game, it’s fun to use the more “useless” characters anyway.

It’s a big game with plenty of content, and it’s a while ride through its entire length. The Vita version is possibly slightly inferior to the console version of the game, for the simple fact that the characters are smaller, and it’s a little harder to appreciate just how awesome that animation is, but as an on-the-go game, you can’t go wrong with this.

Heck, I’m going to throw it down and say this is my favourite platform game, ever.

Digitally Downloaded poll results: Which gaming hardware will be your main in 2012?