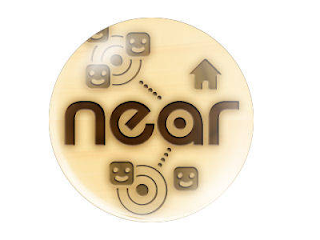 Here’s the first in a new irregular series of data features I’ll be doing around the Vita. As most know, the Vita has a feature called “Near” which tells people how many people (with Near active) have been playing their console within a few kms/ miles of a given spot, what games they’ve been playing, and what they thought of those games. It’s a fun little way to get a feel for what’s hot and not in your area.

So I thought “why not let the Internet know what’s going on in one small corner of the world,” and so, every so often, I’ll take some data samples from Near from where I am, and publish the findings here.

So today, within a few km/ miles of the place in Sydney I tested Near, there were 70 people sharing data. A good number for such a new console, and considering that there would be a lot of people who don’t have Near on. The top five games/ applications for the day were: 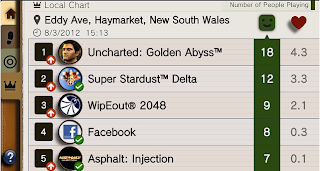 I don’t think there are any surprises there (except for perhaps Ashphalt, terrible game that). Now, let’s drill down a bit further into the data for a few of these games. Starting with the most popular, Uncharted:

For those who don’t have a Vita/ don’t use Near: The Buzz Rating lets you know how much people enjoy a given game. I’m not entirely sure how it’s calculated, but 2.9 is not a very impressive score for a game of Uncharted’s calibre.

The second game in the list was Super Stardust Delta. What did people think of this game?

Next, let’s look a little down past the top five. Hustle Kings was close to the bottom of the day’s charts, and it showed:

Next up I grabbed data on Touch My Katamari, today’s most popular game in terms of buzz rating, so the eight people playing it really enjoyed it:

And that’s it for the first one of these; hope you enjoyed the bit of data, and we’ll see you again soon!