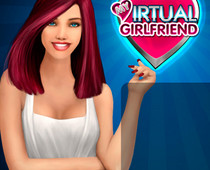 Over at Digitally Downloaded’s sister site, Otaku Gaming, I reviewed a Japanese import game on the DS called Love Plus. It’s a game many have heard of, as it was a pretty big success story for publisher, Konami.

Out in the west many couldn’t understand why a dating game could be popular. When the western take on the dating game genre amounts to My Virtual Girlfriend, that bemusement is entirely understandable.

My Virtual Girlfriend has none of the class or charm of Love Plus. It kicks off with asking you to input a few preferences, and answer some personality questions. The game’s engine will then “pair” you with one of a range of virtual women that match your personality and preferences, thought they’re universally unattractive character models.

Note though: the women’s personality (and your own) have very little to do with success in this game, as the interactions are primitively simple. First, you’ll pick an action. This could be things like complimenting the girl, giving her a gift, or going out on a date. Sometimes these actions cost money, and you’ll then need to work to earn the money back. Some of the interactions are positive, and the girl will like them. Others are negative. The developers clearly assumed that the people playing this game will be awkward loners, since it’s insanely easy to predict the way the woman will react to your selections. Hint: Telling her to “shut up” is not a good idea. 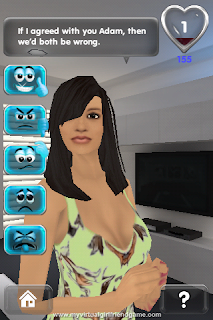 When you do good, a little heart counter in the corner of the screen will fill up. When it fills to the top, you level up, and a new range of interactions is opened to you. Since it’s so easy to figure out what the girl likes, the game quickly degenerates into methodical repetition of the handful of interactions that have a positive effect on the girl.

The only other thing to do is select the “interact” option from the menu. The screen will zoom out, and you’ll now be able to touch the girl wherever you like. Touching certain zones of her body before she’s happy with you will get you “dumped” (game over). Rather worryingly, though, it doesn’t take too many complements to get happy, and then your prodding seems to amuse her.

Contrast this to Love Plus, which is an elegantly written story with a novel’s worth of dialogue, nuanced conversation trees and not a moment of juvenile raunch.

I’m not against dating games. To me, the best in the genre (like Love Plus) are no more for sad, lonely individuals than a Call of Duty game is for psychopathic gun-freaks. The depressing thing is just that the good dating games remain firmly in Japanese, while the rest of the world gets the genre equivalent of Duke Nukem quality (replete with a sense of humour that is just not funny), and believes that’s the best the genre can do.