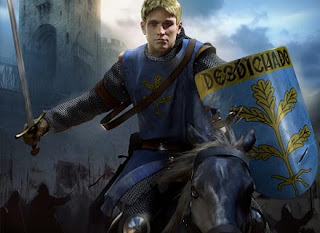 A few years back, before I even aspired to be a videogame journalist, I came across an article by a man who quickly became my favourite journalist in the industry. That man was Tom Chick and the article I speak of was a recap of a session of Europa Universalis that Tom had played. In the article, he speaks to an in-game character about why he is making the decision he makes, and explaining the hardships that come with being expected to rule. It was a riveting read and remains as such even to this day; I’d highly recommend you check it out. I’m sure there are some people here who will appreciate the humour!

I can honestly say that it was that single article that sparked my interest in videogame journalism. So thanks for that, Tom; I wouldn’t be where I am today if it wasn’t for you!

Thus, when I learned that Crusader Kings 2 was built on top of Europa Universalis, I was extremely excited. I would finally get to see the brilliance that Tom had seen, and would be able to craft my own tales based on what happened! It was a perfect opportunity that fell in my lap and one that I took up with great enthusiasm.

Except that what I found wasn’t perfect. It wasn’t even remotely what I was expecting. And, frankly, I didn’t enjoy it much at all.

Now, don’t get me wrong; this isn’t a criticism at Paradox for creating a shoddy game. Far from it! I’m sure it’s a brilliant piece of software that stays very true to its roots of grand strategy. It’s just that I couldn’t figure out what the game wanted me to do. Perhaps that’s more a criticism of the grand strategy genré, but even that excuse can only stretch too far: I absolutely love the Total War franchise and the King Arthur Role-playing Wargame (both games that the more hardcore fans would probably call “grand strategy-lite”) but neither of them confused me as badly as Crusader Kings 2.

Right from the start, this game overwhelms you. Seeing as how I never had a chance to play the original Crusader Kings, I decided to play through the tutorial, considering it’s generally the best way to learn how to do anything in these sorts of games. Unfortunately, unlike other games where the tutorial will teach you things through interacting, Crusader Kings merely gives block after block of text to decipher.

Now, I’m sure we’ve all had teachers that tried to teach this way. Instead of explaining anything, they’ll merely assign you to read a few chapters from a textbook and then declare there will be a test on the material the next day. Crusader Kings 2 is exactly like that; instead of actually showing you how the game concepts work and how they apply to the game as a whole, they just state what the concept is and leave it at that.

There’s a great quote from Confucius that goes: “I hear and I forget. I see and I remember. I do and I understand.” This should be the mantra for any teacher or, equally, for anybody designing a tutorial. Simply telling us how it works will not help us understand it; you have to present us with examples that allow us to utilize this knowledge to be able to ingrain it into our memory. The only part of the tutorial that I actually carried with me was how to find a spouse because they actually make you do it in the tutorial. Everything else was simply blocks of text to memorize and, as such, went right over my head.

All that being said, I think there are the bones of a great grand strategy game here. The map is rendered beautifully in three dimensions and allows you to switch between a number of views that will (presumably) suit any query you may have; for instance, there is a terrain view that shows you where mountain ranges and swamps and the like lie. Alternatively, there is a territory view that shows you which holdings belong to which lord, which is great for strategising where you would like to expand and where you should position troops for said expansion.

There appears to be rather in-depth espionage and diplomacy features in the game, allowing you to plot the assassination of a rival lord or to join forces with a friend from afar so they will back any claims you may make. This would definitely be important throughout as building alliances is usually the easiest way to achieve any semblance of victory in these sorts of games.

I also applaud the inclusion of the importance of religion in this game. Admittedly, it would be hard to avoid religion in a game based during the Crusades, but I still appreciated the effort! Too many titles these days stay as far away from religion as possible, viewing it as a taboo topic. Instead of shying away from it, Crusader Kings 2 stays very true to its historical roots by forcing you to decide how best to deal with the Pope, bishops, cardinals and the like, as well as with lords of differing religions from your own. You can even appoint your own Antipope, á la Henry VIII, if you so desire! It’s a very interesting concept and one that I think Paradox did a spectacular job of implementing.

The issue, of course, is getting to a point in the game where you can actually try to do something as interesting as appointing your own Antipope. And that requires an understanding of the game and a motivation to choose your own objectives; the latter I’m familiar with (I’ve played way too much Minecraft) but the former is something the game does a poor job of accomplishing.

All in all, I simply couldn’t enjoy Crusader Kings 2. Not for lack of trying, let me assure you; I played this game for hours trying to figure out how to get anywhere. The concepts simply eluded me. I really wanted to like it, I did! But when you devote so much time to something with so little reward, you can’t help but feel a bit frustrated.

As such, I have to say that this is not a game for the light of heart, nor is it a game for those who are new to the grand strategy genré. The more hardcore fans will certainly find a ton of content here to keep them appeased and entertained but, if you have never played Europa Universalis or the original Crusader Kings, I would recommend you look elsewhere. This game is simply too dense to decipher without some serious time dedication and patience.

In the meantime, might I instead suggest King Arthur 2: The Roleplaying Wargame,  another spectacular Paradox title? It’s a solid grand strategy game with a twist and features a tutorial that actually explains what to do in a way that you will understand. Promise!