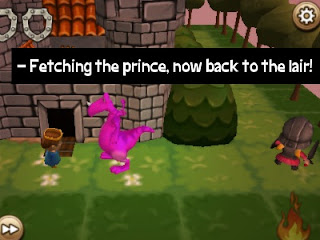 Are you looking for a quest for true love while overcoming jealous dragons and vengeful princesses? A Gay Dragon focuses on Melwin’s quest to find true love, in the form of a prince. Located in a castle, every level requires you to direct Melwin to the prince and return to your lair. The game screams Chu Chu Rocket, but that isn’t a bad thing at all – you’ll drop down arrows on the play field, which Melwin will then follow as he wanders around the level. It’s an elegant system, and it works.

Whilst saving his prince, Melwin will encounter those who oppose his quest for love. The lady dragons, who lies dormant until you take the prince, and the princesses who will roam the level from the beginning. Encountering an enemy means you fail the level instantly.

However, Melwin is able to acquire items each level that will assist him on his journey. Collecting fire mints allow him to shoot fire, defeating any lady dragons. Collecting a pot of gold protects Melwin from the attacks of the princess. It doesn’t make much sense, but it works. 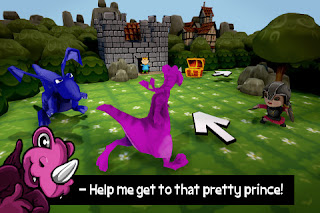 The main trouble with the puzzles is the difficulty spike. It is simply not consistent at all. Some levels you can pass by only placing a few arrows, while others take a good ten attempts. Trial and error is your friend.

At the end of each level, you are scored on how you completed the level, given a rank out of three crowns. Levels are unlocked once you complete the previous level. The game has more than twenty levels, which should take you some time to complete.

Among a dashing prince, every level contains a treasure for you to collect and bring back to your lair, which is customizable. There is no purpose to this feature, as it doesn’t affect the main game’s gameplay at all but it’s a nice little bonus to shoot for. The menu is clunky, and doesn’t accept more than a few inputs at a time. The game also offers a first person view of your lair, but I was unable to see this in action. (Shame, my hot pink lounge room would have been quite the sight!) 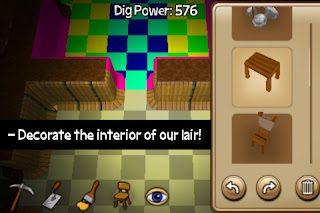 Adding onto my comment on the controls, they’re a bit hit and miss. They work great in the puzzle side of the game. Placing arrows simply consists of tapping the arrow you want and tapping where you want it placed. The controls in the Lair though are just shocking. It seems as if there was two different games being made, and they were fused together at the last minute.

The music is great, and it makes me laugh every time I launch the app. It’s lighthearted fun, though it does get stuck in your head quickly. The animation is good too, detailed enough to see the trees sway in the wind.

I had such a fun time with this. It’s a shame that the Lair doesn’t work that well, but the rest of the gameplay more than makes up for it.