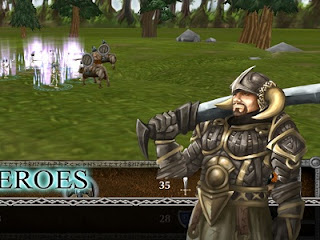 Smuttlewerk Interactive is an indie developer with some real potential. Its first game, Companions, was an entertaining little RPG throwback. Time of Heroes is more ambitious, and while we’re going to wait a few more games before these guys produce AAA-grade iPad entertainment, you can just tell they’re on the right path.

They’ve got a coherent, if pulp, game world that looks like it has been built for an entire game franchise. Companions and Time of Heroes are set in the same universe, although the games are set centuries apart. Both stories are not especially complex, being a real “swords, bare chests and wizards with pointy hats” kind of fantasy, but keeping the world consistent is a smart move on Smuttlewerk’s part; it allows them to build a lore around the fantasy and give each game a context. Hopefully there are more games to be set in the universe.

The gameplay couldn’t be more different than Companions, though. While that game was a really traditional, RPG, Time of Heroes is a basic (but effective) and very traditional SRPG. The game focuses on skirmishes between heroes and the handful of soldiers each commands, and plays out in a straightforward (and traditional) manner: one side takes a turn to move their units over the battlefield and attack anything they end up adjacent to, then the other side takes their turn. Units have hit points that slowly whittle down as they take damage in battle. 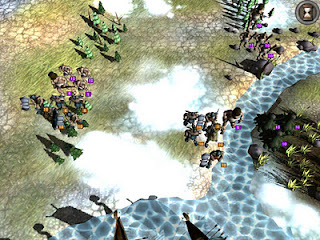 Also as standard for the genre, units have “types” (archers, mounted warriors, soldiers). Each is strong against some types of enemy units, and weak against others. Exploiting that system is the key to success in a game that can at times throw up a surprising challenge. There’s also some terrain effects to take into account. Throw in a simple but effective aesthetic style, and the initial impressions are quite good.

There’s also some interesting customisation options with the leaders, or heroes. They level up as typical for an RPG, and with each new level you can choose to develop their personal combat strength, or develop their leadership ability, which affects their peon’s combat ability, and even the types of soldiers available to command. This customisation really does give the game some interest, and is balanced well; a very pleasant surprise for such an inexpensive game.

The catch (and yes, there’s a catch), is the pacing of the game is completely inadequate. With five or so soldiers attached to each leader, each moving and fighting independently, the skirmishes in Time of Heroes are far too lengthy in execution. Large numbers of units wouldn’t necessarily be such a problem, except that units move around the battlefield at a slow meander, rather than the quick dash of most tactical RPGs. Combat cut scenes also outstay their welcome quickly, given that they’re non-interactive, and the visual effects are a touch too primitive to be worth watching over and over again. 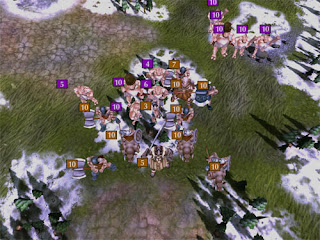 A lesser complaint comes from the interface. It’s possible to access all the information you need to decide whether an attack is wise or not, but it’s not immediately obvious. People less familiar with the game are going to be more than a little confused by why their units suddenly are not performing so well.

Considering this is just their second iPad production the faults of Time of Heroes are easy to forgive; the ambition far outweighs the faults. The team has real potential, and clearly some grand ambitions. It’s exactly the kind of developer that is worth supporting for the pittance they’re asking for the game.

Resident Evil 6: Why I have no interest in this game

Quarrel with this week’s XBL update