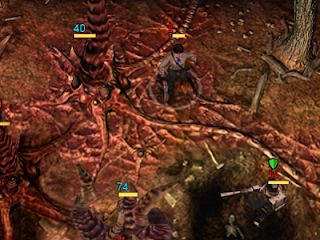 If there’s any justice in the world, Call of Cthulhu: The Wasted Land will be the start of a SRPG franchise that will rival Fire Emblem and Final Fantasy Tactics as a popular, commercially successful name.

It oozes style, is amongst the best looking iPad game out there, and features a nuanced combat system that remains compelling through the entire game. But first, the plot.

The Wasted Land was developed with the blessing and support of Chaosium. This is a pretty big deal for Lovecraft fans, but for the uninitiated: Chaosism owns the rights to the superb Call of Cthulhu pen and paper game. H.P Lovecraft’s unique brand of supernatural horror, which has become known as the Cthulhu mythos (Cthulhu being one of the supremely powerful monster-things that makes a habit of sending people insane), is notoriously difficult to recapture in video game (or film) form.

There are a few different theories to why this is the case, but essentially the problem the Cthulhu mythos faces is this: Lovecraft wrote his books in such a way that the horror was in what you, as the reader didn’t see. The reaction of the characters to what they saw (usually ending in insanity), coupled with Lovecraft’s unique writing style, built such a sense of dread and menace that his stories were the concept of the “fear of the unknown” put into eloquent practice. 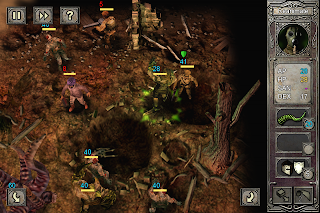 So long story short, this kind of horror doesn’t work so well in film and other visual media because it’s difficult to have a monster movie or game where there isn’t a monster on the screen. The reason Chaosium is so well renowned is because it, more than anyone before or since, understood the style and atmosphere of Lovecraft, and captured it perfectly in game form.

The Wasted Land is not a Chaosism RPG, and does miss the mark from being truly Lovecraftian, but it’s clear the developers did care about the source material, and it’s not surprising that Chaosium did endorse this game. The pace of the game is deliberately slow. Coupled with the menacing soundtrack, the game does work hard to build tension and suspense. For a genre not usually suited to horror themes, this is an impressive effort indeed.

Backing up that theme is the gameplay, which is genuinely strategic, and a nice, reasonably original take on the tactics RPG genre. It works on two main principles – each character has a certain number of action points per turn, and successful attacks with various weapons level up a character’s skill in those weapons.

So for instance, a character with a handgun has enough action points to take two shots. A rifle gunner only gets the one shot. Additionally, there are two stances characters can take. Shooting from the hip, so to speak, reduces accuracy but uses fewer action points. Taking the time to shoot properly will give you a better chance to hit the enemy, but you won’t move as far that turn. 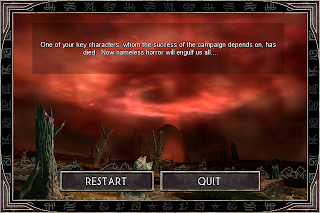 Further complicating things is a cover system which makes positioning your units critical for survival, and a system whereby if a character has some action points left at the end of the turn, and the enemy passes in his direction, he’ll get an automatic free shot. The wonders of ambushing hellspawn and all that.

There’s plenty of meat to the game, and the quest will last you long enough. I liked that individual missions in the game were quite long, and broken up seamlessly into shorter objectives. In terms of narrative this allows the developer to focus in on extended dramatic scenes, and means the plot is less epic, and more focused on the personal exploits, bravery and horrors. Just as it should be.

The only real problem the game is, again, the Lovecraftian roots it borrows inspiration from. That problem is the difficulty level on a conceptual level. Were this game completely true to its Lovecraftian roots, it would be far harder than it is. Impossible even. Lovecraft was always writing about people being little more than flecks of dust in the wind. This game however gives players control over the fate of the characters, and this does mean they’ll be able to take down the otherworldy horrors.

In practice though, it would be commercial suicide to make the game as difficult as it should be. From that perspective, Red Wasp has wisely opted to build a challenging, but fair game. To take the fate of the characters away from the players with the understanding that the evils they face are insurmountable would be a design decision ripe for criticism, so as compromises go, this is a reasonable one.

Aside from the difficulty in bringing Lovecraft to video games, The Wasted Land is a superbly balanced SRPG, with real depth and stunning production values. It’s an atmospheric, tense experience, and now, Red Wasp, we’re ready to see what you can do with a sequel, perhaps even a PC or console game.