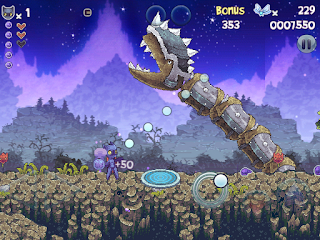 Ever had a dream about a nightmare dreaming to become a scarier nightmare? No? Neither have I. Yet, Allen, the protagonist in Terra Noctis has the same dream. Failing to learn how to become a frightening nightmare as he is too cute, Allen sets off with the goal of defeating the most terrifying monster of the Dreamverse. If Allen is able to defeat this monster, he himself will attain the terrifying power he desires.

The game itself is a very simple platformer and seems to be heavily inspired by Nintendo’s Yoshi’s Island series. Your primary objective is to get from point A to B, while collecting red fairies along the way, with 15 being available to collect in each level.

The red fairies are needed to unlock worlds later on in the game. Though at first you probably won’t have much difficulty unlocking the first few worlds, later worlds may force you to revisit previous levels to collect any fairies you may have missed. 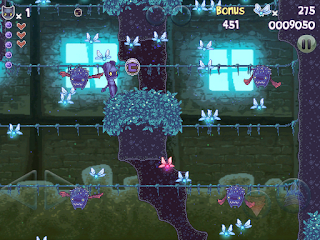 Among other collectables, numerous blue fairies appear in each level, which may be used as cash to purchase items that will make your adventure easier. Five tokens that spell out ‘Scare’ are also littered throughout the level, and a bonus coin which can be used to unlock difficult bonus levels. At the end of each completed level, your collected items are combined into a total score out of 100. This encourages those who enjoy completing games to revisit the worlds, but I only found it necessary in order to collect any extra red fairies.

At the end of each world, Allen faces off against a boss. The boss follows a pattern and through careful analysis you should be able to find its weaknesses and defeat it.

If you’ve played a platformer before, you probably won’t have a lot of difficulty completing first few levels. The game features a variety of difficultly levels for all range of players, however I found that later on the major difficulty either arose from the enemy attacks or the horrid touch-screen controls.

The control scheme consists of 4 digital buttons, two for running left and right, one for jumping and another for crouching. My most major gripe that arises from the scheme is the positioning of the ‘right’ button. The placement of the button makes it difficult for your thumb to reach, sometimes making you hit left instead of right. This may not be an issue for iPhone users, but on the iPad I found it caused me to either die or lose hit points. 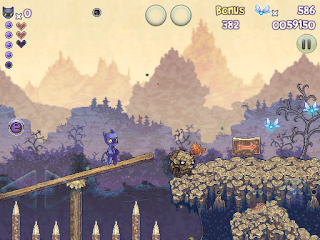 Another issue that bugged me was the aiming system. Rather than flicking to shoot, you are required to hold down somewhere on the screen, at which point a digital analogue stick will pop up, allowing you to control where you shoot. The copy I am reviewing was not the final build, though, and this system may have changed for the better.

During your adventure you will encounter a flying companion. Not only is he usable as a mode of transportation, but he notifies you of upcoming danger or secrets that are yet to be discovered. I wish that there was some way to turn off his notifications however, as his constant warning when I can clearly see the danger on my screen is very annoying.

The game looks very nice, especially the opening cutscene. The animation is fluid and I only found a few issues that resulted in some enemies getting trapped in a wall. The music is also nice, but I would recommend either having it on mute, or playing other music in the background as it quickly gets repetitive.

At the end of the day, there is a lot of content in Terra Noctis that will keep you playing for a long time. You may not feel the urge to want to complete every level, but you will find it hard to put down. It’s a shame that the music gets repetitive fast and the controls aren’t as fine tuned, because Terra Noctis is such an aesthetically beautiful game. Hopefully the control issues are addressed in future updates, but it is definitely one to look out for.