Magical Whip is easily one of the best DSiWare releases to date for just about every conceivable reason – it’s criminally inexpensive, highly engaging, and simply charming. It just has one problem that tarnishes its appeal.
I’ll get this out of the way first – that crucial flaw is the lack of a proper save function in 2011. It’s nice to be able to use your handheld for other things, but Magical Whip is selfish in that you cannot save data during its quest. Even on a 3DS, you aren’t able to suspend save data, so you need to do the game in one go or leave your DS in sleep mode until you finish the job. That may be fine for DSi users, but a 3DS owner cannot view their friend list, get play coins, or browse the internet while Magical Whip remains powered on. 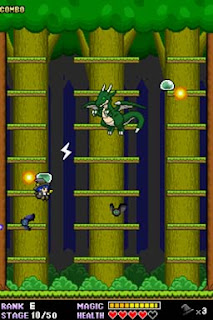 Aside from this, everything is lollipops and rainbows. This seemingly minimalist 2D platformer is actually a clever little romp through the forest where your goal is destroying enemies rather than adventuring. Each stage takes place on a single screen (well, two if we’re being technical) where your wizard of choice has free reign to explore and slay all the incoming foes, such as knights and generic green blobs. That’s the game in its entirety, but it works so well that you’ll never find yourself questioning the formula.
What makes this so engaging is not the task at hand, but the titular weapon. The magical whip allows you to swing horizontally at enemies to lift them up and through them or simply lash them and dispose of them. Both wizards are capable of short-range and long-range swings, but overuse of the latter will quickly drain your magic power and render you defenceless. You can also rack up combos by taking down multiple foes at once, which makes each consecutive attack stronger. The mechanics do a commendable job of adding depth to such a simple concept.
You can choose to play as either a male or female wizard, both of which present slightly different gameplay. The boy’s quest is suited to newcomers, as he is well-endowed with plenty of health. Conversely, the female wizard has a longer whip and will not need to charge as often, but will die with a mere two hits. As you might guess, the lad can be considered an easy mode of sorts, while the lass is suited for advanced players. 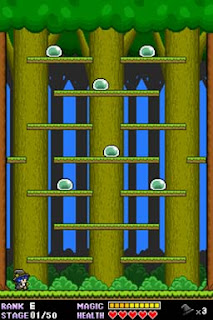 Every so often you’ll stumble into a boss fight – you may need to be an “advanced player” for some of these.
They’re dealt with in the same way as a standard enemy, but they have more endurance and take up significantly more space. You’ll have to put your whip to full use against these pests, but the bouts are indeed satisfying.
With 50 levels, you’re getting plenty of bang for your 200 points. Yes, one of the cheapest games on the eShop is both polished and full of content.
The visuals and sound are about what you’d expect for a puzzle-platformer: charming. Nothing too out of the ordinary, just some retro-esque sprite work and a couple of tracks.  A greater variety in the soundtrack would have helped a bit, but it’s difficult to complain for the price.
If you’re the type to blow throw a game in a single sitting, Magical Whip is a mandatory recommendation. Unfortunately, it is not well-suited to the pick-up-and-play style that so many other games have adopted today. As one of the cheapest games on the eShop, though, why not delve into it anyway?
-Clark A

Get your GTA III on Android and iOS now! (+ trailer)