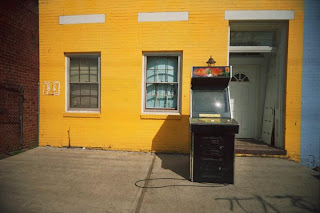 In my hometown, (yes, nostalgia) we only had one arcade that I was aware of. It was in the lobby of the local cinema. Today it stands defunct, offering only booths with graphics that rival Minecraft, and the air hockey table, the only regularly used thing in 2011.
I ask myself, why did this arcade die? Why did all the around the world arcades dry up? What caused this beginning of modern gaming to become a dinosaur? Quaint retro technology only now coveted by ironic hipsters and aficionados? We here at Digitally Downloaded have some wild speculation laced with gaming history. Insert a coin to begin!
CREDITS: 1
Before we get into our speculation, I’m going to hand over to our guest writer, Ryan, for his thoughts on what made arcade gaming prominent in the first place – take it, Ryan!

RYAN: Er, thanks Zane. By modern standards, perhaps, it’s a stretch to believe that pop culture was able to go so far with the gamut of sparse arcade games on offer: the Pac-Man, Donkey Kong and Space Invaders consoles, that sort of thing. They were bulky – almost two metres high – ate children’s quarters, and offered little new after a playthrough, other than the tantalizing promise of beating bosses and reaching higher scores. Still – they lined arcade centres in the early 80’s with great success, mostly because it had the social atmosphere and accessibility a $200 console didn’t. If your pop couldn’t afford an Atari, the arcade was really the only go-to, unless you enjoyed having spare change.

Today, most people are indifferent over the arcade industry, because – and even the most rose-tinted advocate of arcade cabinets will acknowledge this – there’s competition afoot, and lots of it. Don’t get me wrong, there’s still room for arcades, somewhere, but all those ‘simple’ pleasures of life cherished by the children of the 80’s have come full circle. Your friend that keeps hitting the buttons when you’re trying to perform a KO is now a fourteen-year old child in England. A pocket of quarters for an afternoon’s fun has turned into fifty bucks for a game on your shelf. The gun that you pointed at the screen has been replaced with a Wiimote.

AND THE WIIMOTE DOESN’T EVEN LOOK LIKE A GUN.*

ZANE: Yes. The initial challenge for the arcade’s survival was not even breached until the advent of the expensive home console. Playing games at home became easier, and once you had shelled out the fifty bucks for Mario, you never needed to beg your parents for another five to spend chasing that highscore at the arcade. The initial high price paid off over time, saving yourself god-knows-how-many dollars drained directly into that hungry Donkey Kong booth. But of course, solitary home gaming still didn’t have the upper hand over arcades just yet. There was another element to it as well; the social one, but eventually it too began to decline as the console exploded in popularity and convenience won out. 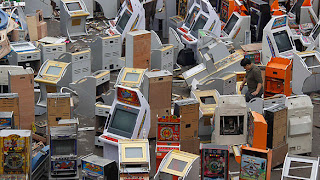 RYAN: Though it’s pointless to postulate at what point arcades did begin to meet difficulty with keeping up with console trends or being able to fail at a game without the harsh judgement of one’s peers, at some point, the arcade industry as we knew it died. But somehow, it finally shifted gear. “Hey,” someone must have noted at Konami, rising in dramatic and purposeful fashion, “Kids don’t play us for graphics or excitement or social gatherings anymore – let’s recoup some of that magic! We don’t need to be consoles! Kids can shoot as many people as they like, but they’ll never be able to dance in their living room!”

This is what most folks in the industry would call the evolution of a commercial product. And so now we have a whole slew of magnificent gimmickry to compensate for the ‘death’ of the classic arcade game, to which the best example, Dance Dance Revolution, comes to mind. Like other arcade success stories, its revenue and somehow therefore its cultural impact has ostensibly fallen, but regardless, it’s still fun. Once, I joined friends in playing Dance Dance Revolution at a Timezone. It cost everyone involved in the whole affair less than ten dollars, and if memory recalls, it was hilarious social fun. Now there’s something the Kinect can only dream of.

So many people will sit and say that arcade gaming offers to the small number of devoted a unique distraction that finds its success in its total difference from the more routine world of controllers, guns, explosions, and elaborate plots via peripheral gimmicks. That way, people won’t care if they part with their change, a commercial attraction that now seems as dubious to some as a skill tester or game of luck. But for most people today, what’s been ‘lost’ in the joys of arcade gaming has been successfully translated to the novelties of peripheral console gaming, and the best case of that in recent memory is the Wii. While Kinect hasn’t hit the right spot quite yet, if ever, there’s no doubt that console games aren’t made for arcades, but arcade games can be made for consoles.

RYAN: True. But as we’ve seen before, arcades sort of have a monopoly on wild gimmicks that no console developer would dare pursue on threat of bankruptcy. The sort of classic arcade that’s been loved and cherished in hindsight isn’t going to cut it with new generations. On the arcade platform specifically, these old games are to many either an antique curiosity or a waste of change, which is sad. But it’s nice to see that the arcade, through novelty, has found still a reasonable level of appeal through innovation. The question is whether, with newer technologies, that innovation can continue through the decade. 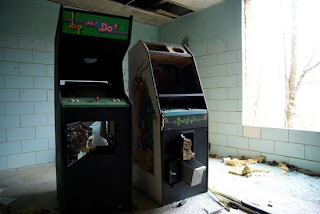 Okay. So why’s the decline of the arcade important? Maybe we can learn from it that a good formula doesn’t carry a game, and definitely not a platform through forever.

ZANE: Perhaps not, but rapid consumerism might. Therefore I predict many more gimmicks. Arcades may remain a novelty in the sense of, well, arcades. Something you use to kill time at the local move theatre, never taking them seriously as a gaming platform, just as a relic of a bygone age

RYAN: But in ten years, maybe technology will change how we see the games we play and enjoy right now, and adaptation and innovation is going to have to be the key to ensuring that the old carries forth into the new.

ZANE: It would have to be something big to revitalise the arcades though, something people wouldn’t be able to have in their own homes, like a console. Personally, if you managed to perfect a holodeck like that of Star Trek, then I will burn every console I’ve ever owned and be an arcade man.

RYAN: I personally think arcades still have a lot to offer. But in the future, who’s going to remember evenings eating pizza over a game of Space Invaders?

RYAN: I mean in the real far future, here. The bleak, dystopian future. The one where arcade games could be the cultural equivalent of Barry Manilow CDs and crocheting.

ZANE: And should that come to pass, God help us all.

*Oh, you can make it look like a gun. But it’ll cost you. ‘Cause what about the people that know it can be a gun? What about those people?