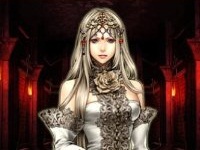 The last time I reviewed Wizardry: Labyrinth of Lost Souls, it was the Japanese version. I never thought the game would get a release in English, but here we are. First the console version got a release in the US courtesy of XSeed. And now the rest of the world can enjoy the iPhone version.

And what a ride this game is. A dungeon crawl in the truest sense, this Wizardry game shows how little the series has evolved over the years, and I say that with substantial respect. The central hub town is no more than a menu. Dungeons are explored in a first person view, and combat can be brutal. Run into the wrong enemies (randomly generated, no less) and it’s going to be game over.

At your disposal are six slots for heroes, and a variety of classes that come together in traditional RPG fashion. So you’ll be taking a mixture of fighters, wizards and rouges into the depths. There’s two “rows” in which your team can be arrayed. The front row does the melee fighting. The back row is protected from the direct combat, but needs magic spells or ranged weapons to do their own fighting.

It’s not that the game is that strategic, because it isn’t – it’s heavy on the grinding, which is relatively tiring, given the encounter rate isn’t nearly as frequent as you might expect from a game that wears its retro credentials on its sleeve. That said, it’s a compelling experience just to hack your way through the dungeon levels, completing the occasional quests and slaughtering legions of evil.

On the iPhone, though, Wizardry is an uncomfortable fit. Part of the problem is the fact that this is the kind of game best suited for extended sit down and play sessions, and the iPad is best suited for short bursts of play. On a technical level, it works – the sprite art shows up on the iPhone beautifully, and this is the kind of game that doesn’t need music to appreciate.

The format is just the problem then, since any time you’ll want to sit down for a hour or three to play a game the iPhone isn’t likely to be your first choice. The iPad might be a better choice in those circumstances, but therein lies the second problem – there’s no iPad app right now. It’s iPhone only, so to play the game on the iPad is an ugly experience indeed. 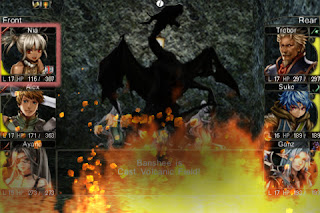 I’m also rather unimpressed by how heavily the game encourages you to spend real money for virtual stuff. The game itself is a free download, yes, but it’s nearly $10 to unlock the game past the first level of one dungeon. When on top of that the game makes a big show of the extra money you can spend to give yourself a leg up the game starts to feel very mercenary indeed.

That’s especially a slap in the face when you consider how poor the English translation is. Some of the messages (especially during combat) are downright broken, and the game often forgets that women aren’t meant to be referred to as “he.”

It’s a testament to the quality of Wizardry-style dungeon hacking that I can play through the poor translation, which is usually a personal interest killing pet peeve, but this is a premium-priced game in reality, and it’s disappointing in the extreme to think that some people are going to be put off by the cheap early impressions.