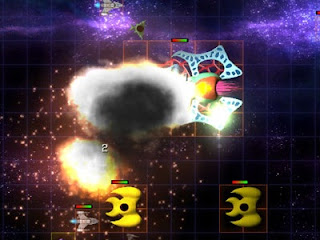 Star Hammer Tactics is still one of the best PlayStation Minis games available through the PSN. The Aussie indie hit lacked greatly in terms of presentation, but for those short strategic fixes, it was the perfect small download to have sitting on the PSP. One the iPad, it’s even better.

The new Star Hammer Tactics is very much a remix of the previous game. For the most part the levels and set-up are the same, but where balance was a problem, Black Lab Games has tweaked things largely for the better.

The end result is a slick combat system that manages to offer depth while, via a strict time limit, keeping the game moving snappily. I must admit, as a fan of the hardest of hardcore strategy games, the pace of the game at times irked me, as I wanted to think a little more deeply about my moves. The irritation is compounded by a slightly unintuitive control system. You need to tap a unit to select it, and then tap and drag that same unit to move it. With unlimited time to make all these taps, it’s a system that is functional if clunky. When the time pressure is on, it can mean the difference between pulling off a brilliant strategy and failing dismally.

The game itself is something that tactics strategy game fans will get right into. Set in space, the play field across a series of increasingly-difficult missions is divided up into squares. By moving units around and deploying missiles at the right moments, the goal is to destroy the enemy fleet in turn-based fashion. 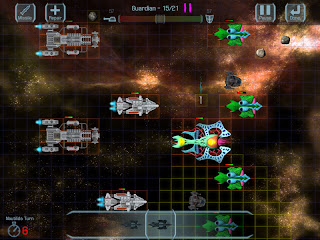 The depth comes when you consider you’re often outnumbered and outgunned. Making effective use of hit-and-run and gangup tactics, you’ll also need to be able to compensate for the bulk (and lack of maneuverability) of your powerful ships. Missiles, for instance, only travel a certain distance each turn, meaning it is possible to dodge them if they’re fired from far away, and you choose your moves wisely.

In addition to the campaign mode, which links scenarios together with a text-based series of mission briefings (which don’t do much to engage you with the story, truth be told), there’s a rather nice skirmish game option. There’s multiplayer in there, and it’s possible to turn the time limits off. And there is the real strength of Star Hammer Tactics – a turn-based strategy game that is accessible to pretty much everyone, but deep enough to stroke the competitive fires.

And, importantly, Black Lab Games has worked hard to improve the presentation of the game. Units are clearer and better drawn than the ugly blurs that made up the PSN Mini version, and there’s a bit of flash involved in the melee combat – the screen switches to a 3D view of the ships blasting away at one another.

It’s still a game of functional visuals overall, with limited animation and bland menus, but now there’s no point where the game looks so bad as to be off putting, and the 3D close-in firefights is a nice touch.

So, much like Star Hammer Tactics deserved to succeed on the PSN, it deserves to succeed on the iPad. It’s an inexpensive and efficient tactics strategy game, with just enough depth and a superb, balanced, multiplayer game.