I did not see this coming. The ‘modernisation’ of the classic Asteroids formula has managed to become both interesting to the modern gamer, while remaining true to its roots.

It’s something of a trend at the moment, publishers looking to update their classic portfolios. It worked when Taito did it with Space Invaders: Infinity Gene. It worked when Namco reinvisioned Pac-Man with Pac-Man Championship Edition. Atari has had trouble with updating its older properties (Yar’s Revenge being a good example), and as a freemium iOS download, Asteroids: Gunner could very well have been a failed attempt.

It’s a twin stick shooter, reminiscent of Activision’s Geometry Wars, only instead of neon-colored aggressive shapes, you’re shooting at passive asteroids. Where the original Asteroids game featured no more than a fire button, the update comes with all the modern trappings; power ups, health bars and levels rather than continuous waves. Between each level (which are unlocked as you go along, saving you from restarting from level 1 each time your lives run out) an in-game shop is available to purchase upgrades with money earned by destroying asteroids. 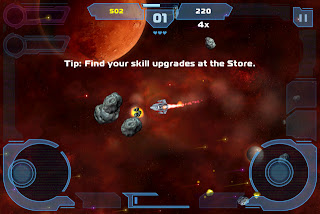 Upgrades range from all the standard tropes – there’s explosive mines to lay down, upgrades to your on-board weapons, and shields to protect you from the asteroids. They tend to be expensive to buy in the shop, but destroying asteroids leaves plenty around for picking up.

When the game picks up pace in the later levels, this is a dynamic formula to deal with. The early levels ease people into the experience, yes, but there are so many levels to play through that there’s something for everyone. Successfully working through all the levels will result in a very high score. Which is also the game’s biggest failing – though there’s Game Centre integration, there’s no high score tables, a nearly unforgivable oversight for an arcade game such as this.

But then again, this is a free game, and though there’s paid-for bits and pieces, such as additional spaceships and galaxies (buy everything, and you’re looking at a whopping 150 levels), it’s refreshing to see a publisher make such freemium add-ons so completely optional for the experience.

Coupled with some high production values and delightfully modern-retro fusion music, and this is one of the better free iOS games you can invest in. Like most, it plays better on iPad than iPhone with less screen real estate taken up by the virtual control sticks, but either way, this is a great little download for people looking for something cheap and accessible to see them through some downtime or a plane trip or two.