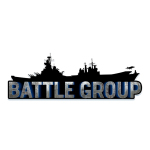 Remember Missile Defence? The old game where you’d need to shoot little explosive lines to stop enemy moving lines from crashing into the pixelated city that you’re meant to be defending? Battle Group is like an action-heavy version of that, except now you’re moving.

The game puts you in control of a fleet of battleships as they sail the oceans, shooting explosive weaponry (admittedly more impressive now than coloured lines) in all directions to take down enemy planes, boats, and missiles. If too many of those missiles hit the boats in your fleet, it’s game over. The ships themselves are moving on autopilot; your only concern is shooting down hostiles, and that’s just as well, as the swarms can become very hectic.

Each of the boats offers different firepower to bring to the party. You’ll start the game with just the one ship, which has the standard weapon, but it doesn’t take long to acquire additional ships (earned via unlocks for completing levels well and earning stars), each with a different weapon. Given that it simply provides different ways to destroy everything in your path, these alternative weapons don’t do much for varying the gameplay up, but the illusion of variety is appreciated.

Aiming is simple – tap the screen and the weapon will fire there (secondary weapons require you to tap the ship with the weapon, and then drag the finger to the desired killing field). It’s easy enough to manage, though hitting the faster enemies is not easy with a single shot. Though there’s nothing stopping you ‘mashing’ the screen to create many explosions simultaneously, that does deplete ammunition quickly, and the half second it takes to recharge the weapons can be fatal. 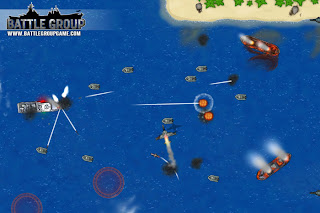 So being a good aim is important. The problem with this simple but rather elegant system is the hands. Because the enemies can come at the ships from anywhere, there will be times where you’re tapping away at one corner of the screen, and some missiles are sneaking up at you from underneath your hand. While it doesn’t make the levels unplayable, it means that to score really well at the harder stages you’ll need to memorise where the enemy patterns are coming from, and that’s not always a whole lot of fun.

The presentation is very hit and miss, too. The visual style is usually quite poor. Enemies and planes aren’t very interesting (or detailed), and missiles and the like are small enough to miss at times. The sound effects on the other hand are great, with the busier levels being a true cacophony of military noise that does a wonderful job of drowning out the irritating passengers on the train or bus. Unfortunately the voice acting is terrible, but at least that’s skipable.

Much like Missile Command this is a simple arcade game and doesn’t have much depth behind that simple presence. There’s the extra ships to unlock, and those can be upgraded through a basic RPG structure, and there’s a reasonable number of levels to unlock, but they all provide mere variances on the same basic structure. Thankfully there is full Game Center support to compare progress with friends, and for people that like seeing their achievement scores increase, the achievements in this game are very, very generous (100 points a pop).

All up this is a cheap and cheerful little arcade game that hearkens back to the fun of Missile Command. If you liked that game, you should like this one.