Ascension: Chronicle of the Godslayer is a deck building card game. In other words, it’s one of an assortment of games that tag along behind the classic game, Dominion, not nearly as popular or influential, but containing many of the same basic gameplay elements.

For those who haven’t played Dominion (and you all should, it’s a brilliant game), it plays like this: Each player starts the game with a small deck of cards. By using those cards, players can “buy” cards from a central playing field, adding them to their own decks. Slowly those decks grow, and the cards bought from the middle playing area introduce a variety of game effects that make it easier for you to win (buying better cards, earning more victory points), or harder for your opponent to do well (disruptive effects that make life hard).

These games (part of a subgenre called “Deck Building Card Games”) are wonderfully strategic, and a well balanced one offers players three or four effective strategies that, played well, can lead to a victory. 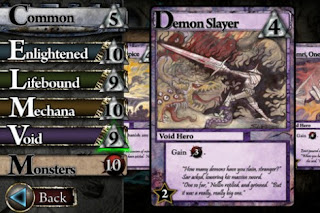 And Ascension is a well balanced one. In this game, actions are split into two: there are monsters to kill (which directly earn you a lot of victory points, but don’t add cards to your deck), and “white” cards to earn, which have positive effects on your side, build the playing deck up (thus earning more resources), and so indirectly lead to victory points at the end of the game. There are two resources that can be put to use to achieve those two actions – martial resources (typically soldier-type cards) and “spiritual” resources which allow players to purchase the white cards.

Finding a balance between pursuing the two actions is key to success in Ascension, and it’s a structure that works well in creating a nuanced, varied game, perhaps not as well as the relatively simple formula of Dominion, but well enough.

On the iPad the game is hampered somewhat by a cluttered interface. There’s too much tapping all over the screen to access the variety of card effects that will be in play at once. Additionally, having to double tap cards to bring up detailed information (including the in-game effects those cards have) leads to an incredibly clunky experience until you’ve memorised exactly what the card does. 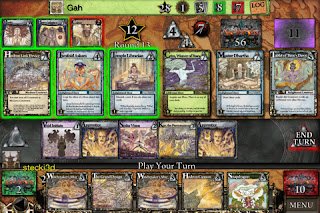 The second great problem is in following what the opponent is doing. Cards fly by when the opponent takes his turn (whether AI or human), and backtracking to check what was going on runs into that clunky interface problem again.

The third main complaint I have is the online experience, which is quite poor and slow for a game that is essentially designed for quick, 20 minute bursts. Bring those three problems together, and you end up with a game that is a touch disappointing for how addictive the physical game clearly is, but by the same token it’s workable.

The iPad does a good job of displaying the virtual card’s artwork (a necessity, since these card games rely on art work for much of their appeal), but does a terrible job with music – the soundtrack is looped, and has an uncomfortable break between loops.

Given Dominion isn’t on the iPad (yet…) Ascension is a good choice for people who can’t get enough of this style of game. It’s just a pity that the transfer itself is somewhat average in execution, meaning more casual players will likely wonder where the appeal of these games is.