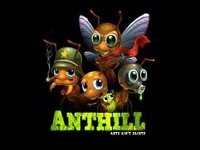 The tower defence genre really does seem to be the flavour of the month (or year even!) when it comes to iOS gaming at the moment.

The platform is well suited to these types of games and developers are finding new and inventive ways to break the mould. One of those developers is Image & Form International AB who have done an amazing job with Anthill: Tactical Trail Defense (A:TTD). By taking the parts of the genre that work well and incorporating their own style and quirks, they’ve made a very entertaining game that should appeal to almost everyone, even gamers who usually aren’t keen on tower defence.

A:TTD is a line-drawing tower defence/ strategy game which means that instead of erecting stationary towers the player needs to direct the flow of troops around the map all the while gathering resources and protecting their base. Your base in this instance is an anthill, your troops are ants, your enemies are a variety of bugs and your resources are bug larvae and the carcasses of your fallen opposition. Create more troops by collecting food and get more points by collecting treasure, killing enemies and protecting your base at all costs. 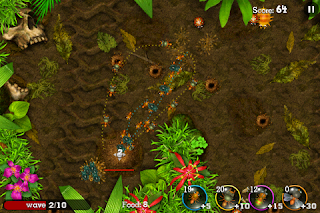 Directing your troops is done by drawing a “pheromone trail” from your base to anywhere on the map and then selecting which of your troops you want to follow the trail. Things can get a little tricky when you have a lot of trails all over the screen but thankfully you can delete a trail by holding down on it and tapping the “X” when it appears (though, this isn’t always straightforward either when you have a couple of trails right next to each other).

Basic military units include the worker ant who gathers food and treasure and is vital for the sustainability of the mission, the soldier ant who fights off the oncoming hordes with his bare mandibles, the bomber ant who flies overhead and rains gooey death from the skies and finally the spitter ants who are your artillery units and are your only defenders who are capable of taking out enemy bombers. Enemies range from ladybirds who want nothing more than just to steal your food and leave you penniless, to spitters, bombers and even boss beetles.

With over 20 great missions, players will be challenged time and time again to execute their objectives with surgical precision with the hope of achieving all the stars on each level. The more stars you win, the more you can upgrade your units and for those with some spare cash lying around there’s even the option of buying stars for your upgrades. Game Center integration means you can see how you compare as a tactical military genius against the rest of the world and you can challenge your friends to try and beat your high scores. 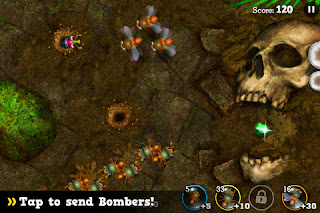 The graphics in A:TTD are beautiful; clean lines, a bright pallet and enough variety in design that you can tell your troops from those of the enemy even on an iPhone screen. The music is fitting, the dialogue between characters is humorous and witty and the whole experience comes together seamlessly. Some stages can seem disproportionately harder than others but that’s all part of the challenge and doesn’t detract from the overall gameplay.

Anthill: Tactical Trail Defense is not your average tower defence game. It combines all the things we know and love about the genre and uses that to grow, develop and become a far more entertaining and challenging game than it has any right to do. It is a breath of fresh air in what is, by essence, a fairly derivative genre and is definitely a game worth checking out.