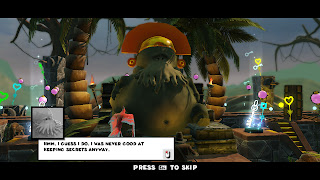 From the Swedish developer Fatshark, Hamilton’s Great Adventure takes an entirely different direction compared to their previous titles, Lead and Gold and Bionic Commando Rearmed 2. It’s a puzzle game where you take charge as the adventurer Hamilton along with his parrot companion Sasha and have to navigate tile-based mazes with a number of traps and enemies.

There is a light story along the lines of Hamilton telling his granddaughter a story of how he came to find the lost continent Maralidia and the adventures he encounters. There are a few chuckles and smiles here and there but it serves as a little spice on top of the very capable gameplay.

The game his built to be a rewarding experience for both casual and core gamers alike and can be as hard or easy as you are personally looking for. The difficulty curve is smooth and gives the player time to adjust to the number of mechanics the levels have to offer. You collect coins along the way and depending on how many of the coins you get, you are awarded a medal when you complete the levels. To get get the gold some of the levels can be impossibly frustrating while just finishing the same levels with the minimum amount of coin can be a walk in the park. Those who tend to go for the slam your head on the wall until every shiny collectible is found method will most likely be able to sink a fair amount of time in the game. There are somewhere around 60 levels and some bonus challenges that really test your skill and determination.

When you get to the later stages the mazes get more complex and require some trial and error to master especially when timing and reflexes were involved. It never got really frustrating though unless I set out to get the gold. What got frustrating though is that darned bird, Shasha. The play around him was built so two people could play co-op on the PC with one controlling the bird with the mouse and another controlling the man with the keyboard. I don’t see the point in trying to get people to co-op on the same PC. That’s a relic of the past and should stay dead. The only scenario I could see myself trying it is with a young kid controlling the mouse but I fear even that would get boring after a while. The bird has a few important tasks that are imperative to solving the puzzles like triggering lever and luring enemies away but mostly he is an annoyance that should have been left out.

Overall, the game is a good way to spend some time on, but nothing spectacular. It definitely a good brain teaser for kids and it has a Disney’esque feel about it. It will appeal to the same crowd, I think, and is a quality game for the casual gamer and the dedicated puzzle enthusiast.