Cricket Captain 2011 has been a real surprise. For a sport with such a small international market, it comes close enough to the better soccer management games out there to hold its head high.

Firstly, though, it checks the most important box – it uses real names. For a game that involves managing a dream team and building it carefully over seasons, it’s critical that the names on the screen are the same names that pop up in the real sport. That authenticity extends right down to the lesser cricking nations such as Zimbabwe and Bangladesh, so credit where credit is due to the developers for being able to pull that off.

Less pleasant when we talk about opening impressions is the interface. In short, it’s not very good. Menus and stat sheets are blocky and aesthetically the colours don’t always work well together – it looks like something a high school student put together in Adobe Flash at times. 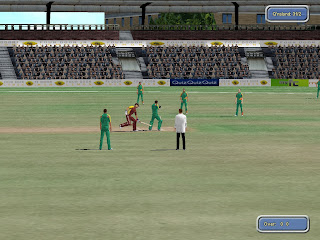 Worse, text looks rather blurry on the iPad’s HD screen, too. Where the better soccer management games are slick productions out of necessity for the sheer amount of time spend in menus, Cricket Captain manages to look more like a spreadsheet of data. More authentic to real life perhaps, but not many people are going to appreciate coming home from work to bury themselves in even more spreadsheets.

Redeeming things somewhat is the in-match presentation. The games can be played out ball-by-ball if desired, and though players don’t have direct control over the action, bars such as aggression can be tweaked to optimise a team’s performance. Key moments, such as wickets and big hits, are presented through a short video clip, which looks a bit like a TV broadcast, and lends some excitement to otherwise static screens.

Stats nuts will be pleased to note that the game tracks everything you could hope it would, from wagon wheels to averages and the like. Cricket will never be like baseball in attaching a hundred different numbers to each player, but there’s just enough meat here to be interesting, and some players might enjoy the more streamlined approach to numbers.

There’s plenty of different ways to play, too. From English and Australian team-based championships to International competitions and team management, the sport is represented well at the highest levels. Assuming the role of the team manager there’s all the usual problems to deal with, from scouting out new talent to dealing with injuries. 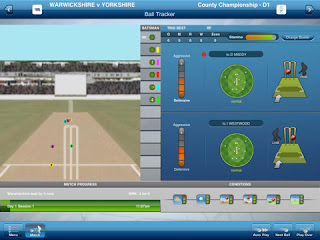 In addition, managing a domestic team often means you’ll be heading into matches with the B-team as the better players get called up to the national team. It all plays out much like you’d expect the sport’s behind-the-scenes to work, though there are a couple of points where the game seems a touch too easy (then again perhaps it’s just that I’m an undiscovered management talent and the Australian Cricket Board should be hiring me).

That said, it’s startling that in a Cricket management sim, there’s no Indian domestic cricket league game mode. The domestic competition in India is where all the good players go; it’s essentially the equivalent to soccer’s English premier league, and the most dynamic representation of the sport is there.

It’s more understandable, but just as disappointing, that there’s only the ten main cricket teams represented at the international layer of the game. Some 70 nations play cricket, and while there is daylight in terms of quality between that top 10 and the bottom 60, it would have been a lot of fun building Japan’s international team up to the point where it’s competitive at the world cup.

It also would have opened the opportunity to broaden the game’s sim elements beyond individual player development into areas such as developing the game’s domestic league and visibility within the country, brokering deals with TV networks, and other such things that would have turned this game into a more rounded package.

As it is, it’s a bit of a light simulation game with some poor presentation, but for that it manages to be a lot of fun. Cricket fans will lap this up, if only for the ability to personally dump Michael Clark from the Australian team.