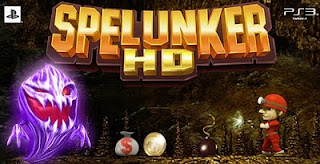 Firstly, we simply have to start this review off with a word of warning; Spelunker HD is only for true hardcore gamers. The games wimpy protagonist doesn’t have a glass jaw, he has a glass body, and will die for literally every mistake made: jump or fall from too high, edge too far off a ladder or rope, touch any projectiles or enemies, etc., Spelunker HD is flat-out punishing. But if you’re a hardcore gamer out there that’s up to the challenge and wondering if the game is actually any fun, the answer is undeniably, yes.

In 1983 the classic platformer Spelunker released in Japan, and while the game is primarily known for its unforgiving difficulty, it has remained a cult hit there ever since. The term ‘spelunker’ is primarily used to explain someone who explores caves, and that is exactly what we find here in Spelunker HD. There’s one giant cave that’s broken down into 10 differently themed sub-caves, each with 10 levels to descend through, and just as exploring caves in real life is dangerous, Spelunker HD makes no exception here either. 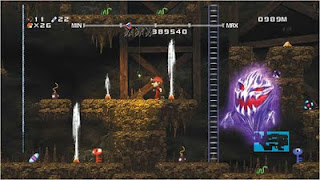 Precise platforming, finding coloured keys to unlock doors, and dealing with malicious traps that lie in wait is the name of the game. From your first step into the cave, death will come very quickly and frequently, and taking a whirl at the games tutorial before you start your spelunking career will help teach you the ropes, but it takes practice and perseverance to push ever deeper into the cave.

With only two types of attacks; one being a flare that kills all on-screen enemies for a few seconds, and a bomb that can destroy blockades or enemies. While these weapons are limited, and can only be performed via item pickups, they are also tricky to master too, as you can easily end up killing yourself with these weapons if you’re not careful as well. There’s also a gun that is used to destroy ghosts that randomly appear as well. It’s not anything too exciting, but it does take time to destroy them, which is a big hurdle in itself, as your constantly depleting energy bar equals’ death if it reaches zero, and these ghost can take precious time to kill. Thankfully, item pickups litter the levels to regain weapons and energy, and while you’ll find your death aplenty, the game does offer a substantial amount of lives to help ease the pain somewhat, but not by much. 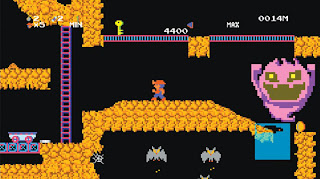 While all of this may sound a bit unnerving, once you learn the limits to what you can and can’t do in the game, it becomes horribly addictive. Pushing ever deeper into the cave requires skill and with every death, comes knowledge, and as this cycle continues your Spelunking skills get ever stronger. Also, once you grasp the basics, you’ll find that the game is nothing short of platforming perfection, which stands its ground to the likes of Super Mario Bros and Donkey Kong.
Retro gaming fans will not only find a lot to love here with the gameplay, but in the games aesthetics as well. The remastered HD visuals are nothing short of outstanding, but the game also offers a Classic Mode as well. This mode is the exact same game, but it offers slightly updated pixelated graphics, reminiscent of the original Spelunker that released so long ago. Each mode comes with its own soundtrack too; Classic Mode offers the original soundtrack, while the remastered score found in the Remake modes suites its updated visuals wonderfully. It may not seem like much, but this little addition not only brings an extra touch of nostalgia, but loads of charm with it as well and just pushes the games value up another notch. 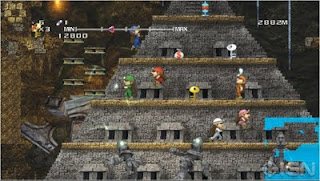 If you’ve got a hardcore gamer friend on hand, Spelunker allows for up to six player online and offline multiplayer to take to the caves either as a team, or in race-typed levels against each other, where the first player to finish the level wins. With a good team of spelunkers, taking on these tougher, multiplayer exclusive levels is an absolute blast, but you’ll need a real friend around to experience this, as the online rooms are practically dead.

Whether playing by yourself, or with friends, Spelunker offers up a lot of game here; 100 levels, hidden collectibles, online and offline multiplayer and full Platinum Trophy support – online trophies could be hard to obtain because of the lack of online players – you can easily expect to get 30+ hours of enjoyment here easily, which isn’t bad for the $10 asking price, and means that for the right type of gamer, this addictive game is well worth its small asking price.

Do you feel like games today are just too easy? Do you long for a solid retro platformer that will challenge your skills and satisfy your nostalgic needs as well? Then look no further than Spelunker HD. Whether spelunking by yourself or with a friend, Spelunker HD’s addictive gameplay is brutally tough, but rewarding; and it’s as close to platforming perfection as they come. Take the plunge and go spelunking, you’ll be glad you did.