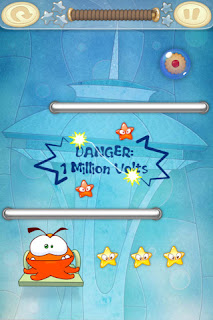 Save Yammi is one of those games. It’s a cheap downloadable title with an easy gimmick and basic gameplay. It does all that well enough, but this is a game that fits squarely in the same realm as Angry Birds, and I just can’t see it topping that.

This game’s premise is this: There’s a cute little cookie-munching monster at the base of the iPhone’s screen (no, he isn’t blue). There’s a cookie suspended in a bubble somewhere above him (the rare level flips this around, but I don’t want to be confusing here). By tapping the bubble, the cookie is freed and proceeds to fall and roll it’s way towards the monster.

To pass a level, you’ll need to use the in-level powerups as well as the iPhone’s gyroscope to guide the cookie to the monster’s mouth. The powerups are a varied bunch – from items that make the cookie float, to shields and shrinking/ growing pickups. It’s a veritable Alice in Wonderland. Players also have access to a limited supply of rope, which can be used to create impromptu bridges on each level.

Littering each screen is also a range of hazards, from everything from electrified barriers to the mundane hole in the floor. The game’s difficulty scales nicely, starting off very gently but gradually becoming a reasonable challenge. Collecting some of the bonus stars, especially, will test your commitment to finish this game 100 per cent. 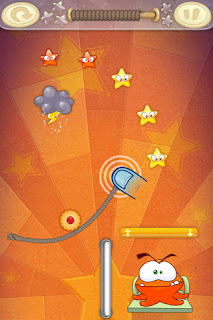 There’s plenty of content for the asking price, and the visuals are, as you’d expect, quite cute. It’s just the darned gyroscope controls that let this one down. Angry Birds is great to play on the train or in those down times. Tap, slide, release, repeat. Here you’ll be tilting, shaking and otherwise making a fool of yourself in public. Throw in the imprecise nature of gyroscopes and you end up with a formula that, on the more testing levels, will drive you mad.

It’s entirely for that reason that I don’t see this game becoming the next Angry Birds. There’s nothing inherently wrong with it; it’s an accessible, easy to play casual game with all the usual Game Center trappings.

It’s just that, while Angry Birds (and Flight Control before it), are basic games, Save Yammi tries just a touch too hard to mix things up. The gyroscope is the straw that breaks the camel’s here.