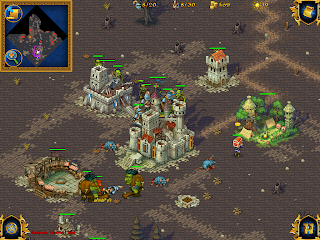 Majesty on the iPad is a great thing to behold. Beyond the value of the game itself – and it is a good game indeed, it’s the fact that Paradox Interactive is now involved with the iOS App Stores that’s exciting. It might be through an intermediary at this stage, (HeroCraft was behind this version of the game) but after seeing how well Majesty turned out, the potential for a Pride of Nations HD should surely be too good to ignore.

Majesty itself is a game starting to show its age (given there’s already a sequel on the PC), but it’s still hugely entertaining and charming. The ‘unique’ twist in this RTS, as far as anything in the games industry can be called ‘unique,’ is that this is a game that strips control away from the player. There’s no need to direct units to objectives and no right clicking involved at all (which is just as well, there’s no mouse on the iPad). Instead, the brightly coloured inhabitants of the military camps that the player is tasked to build up go about their merry way, doing what the AI considers appropriate to claim the victory screen.

It’s possible to give the AI a nudge in the right direction by offering bounties for destroying certain enemy structures, but for the most part it’s easier just to let the heroes go about on their merry way. It’s far from a passive game, however. Because the focus is taken away from directing units, there’s more to do in the towns themselves. From buying new structures, to researching new technologies and equipment for the heroes; all the tropes of the traditional RTS town management are turned up to 11 for this game. The survival of your army hinges on your ability to juggle multiple technology research projects and building construction at a faster time than is usual for an RTS.

And things are complicated further by some of the dynamic changes that can happen to the town as it grows. After a certain number of buildings have been built, sewers will start popping up around the place. These spawn rats and undead creatures, which need to be dealt with before they tear down some buildings. After a certain number of heroes die, a graveyard will appear near the village as well, spawning even more undead nasties.

This dynamic certainly keeps you on your toes. Proper placement of watch towers can keep these spawning hordes at bay, but never defeat them; there’s no way to destroy these sewer entrances or graveyards. These spawning hordes also provide experience point fodder for the various units that are recruited through the buildings. These are the usual fantasy tropes – magicians, soldiers, rangers and healers, and though the range is limited, there’s plenty of personality in that range.

From the animation, to the bites of text that consist of the game’s story, there’s plenty of humour in Majesty. It’s not overblown, nor is it subtle, but the middle ground it straddles is a very charming place. 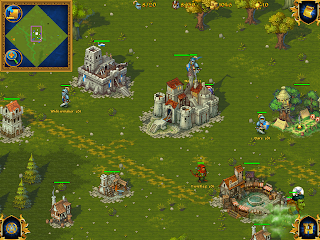 On the iPad, the game plays beautifully, with the clear screen displaying sharp colours with nary a hint of slowdown, even when the screen is packed with animated characters. The one complaint would be with the placement of buildings; it’s a little hard to be precise with where you want to place them when there’s no ‘tap and drag’ ability. It’s a small hitch in an otherwise masterful interface.

There’s only a handful of levels, but spread across three difficulties and given that each of those levels can last a hour or longer, there’s plenty of content in this package. The real disappointment is the lack of Game Center integration. It’s an absolute necessity for iOS games now, and the fact it’s not included for leaderboards and achievements makes Majesty seem more limited than it is in reality.

Still, that minor gripe aside, Majesty is majestic (had to fit that pun in somewhere…). It’s a light, hugely entertaining strategy game, and while we wait for Pride of Nations HD, this will tide us over quite nicely on the Paradox front.

Digitally Downloaded August special: the must-have games of the year (so far)