You’ve developed a killer new game, and you’re preparing to launch it. First step would be to launch it in your local region, but most developers look to globalize their product to maximize the potential revenue from it. 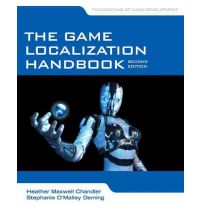 This is where the Game Localization Handbook comes in (which might be an ironic title, depending where in the world you bought this). Think of it as a more useful version of a Dummy’s guide; it provides an overview of the challenges and considerations you need to make when investing in a localization project, and the provides some pointers on how to go about addressing those pitfalls.

It’s a surprisingly dense book, because localisation (this is how we spell it on our side of the ocean) is a more complex minefield than many would care to navigate. From cultural sensitivities, to finding the right localisation kit and budgeting how much you localise for each location (after all, it’s obscenely expensive to translate into every language in Europe, let alone the rest of the world), there’s a lot a developer and/ or publisher needs to consider at this point in the development process.

The book lays out these issues in a logical flow, and is an easy read; as complex as the topics might be, even laypeople can follow the book’s pointers. Though it won’t solve the problems developers face with localisation in itself, it’ll lay out the process to get things done. Insights from various people within the industry, and a range of case studies are part and parcel for this kind of book, and are as useful as you could expect.

This kind of book is more useful to the smaller developers, as the larger ones will be able to rely on their major publishers to shoulder much of the localisation burden. That said, gamers curious about the game development process can come to a greater appreciation on just how complex and expensive localisation can be as well, and it’s a much more enjoyable read than the typical textbook.

Perhaps Nintendo should send the members of Project Rainfall a few copies.