Not the dream I was hoping for.

The Future You’ve Been Dreaming Of is a voyeurism simulation, and coming from developer qureate, we all knew what that would involve upfront. As the developer has so brazenly shown with Duel Princess and Livestream Escape From Hotel Izanami, qureate’s teams likes the fan service to be heavy and unabashed. The Future You’ve Been Dreaming Of is in some ways the epitome of the qureate ethos, given that it positions you – an invisible spirit-god – in a room with a girl that wears a very short skirt and the freedom to move around at will and control her every action. And yet, oddly, while both Duel Princess and Hotel Izanami were genuinely worthwhile games with some extremely effective fan service, this thing just doesn’t push any buttons either as a game or an exercise in titillation.

It is somehow simultaneously far too much, and yet also too tame. I’ll start with the former. As mentioned, you play as a house-bound Zashiki-Warashi spirit, effectively haunting the apartment that a young girl (Sachi) has moved into. The apartment initially seems like a good deal to her, given that it’s cheap and she’s struggling to find work or a direction in life, but of course, she’s not aware that there’s a ghost haunting it. Not that she matters enough to move out when she discovers that, of course. Mechanically this translates into a simple “life sim” game. You set up a routine of activities for Sachi, and at the end of each day, a range of stats that she possesses increase based on the actions she’s taken. If she exercises, her physical fitness will increase. If she studies, her intellect will grow, and so on. As the game progresses you also unlock a couple of little minigames that you can play to help her out in a tough spot. There are no fewer than twenty different endings to aim for, based on the decisions you take, but let’s be real here – those endings are secondary to the real goal of The Future You’ve Been Dreaming Of, which is…

There’s no way to put this off any longer, so I’ll just say it: the goal of the game is to spend as much time looking up Sachi’s skirt as possible. Or directing her to the shower so you can watch her semi-opaque form scrubbing away at her body. Or, once you get the ability to physically interact with her, touching her all over (which startles her, but, again for some reason she never feels the need to get the hell out of the apartment). The whole thing is basically “what would a pervy invisible man do,” and much of the game is spent setting up the opportunities to do just that. 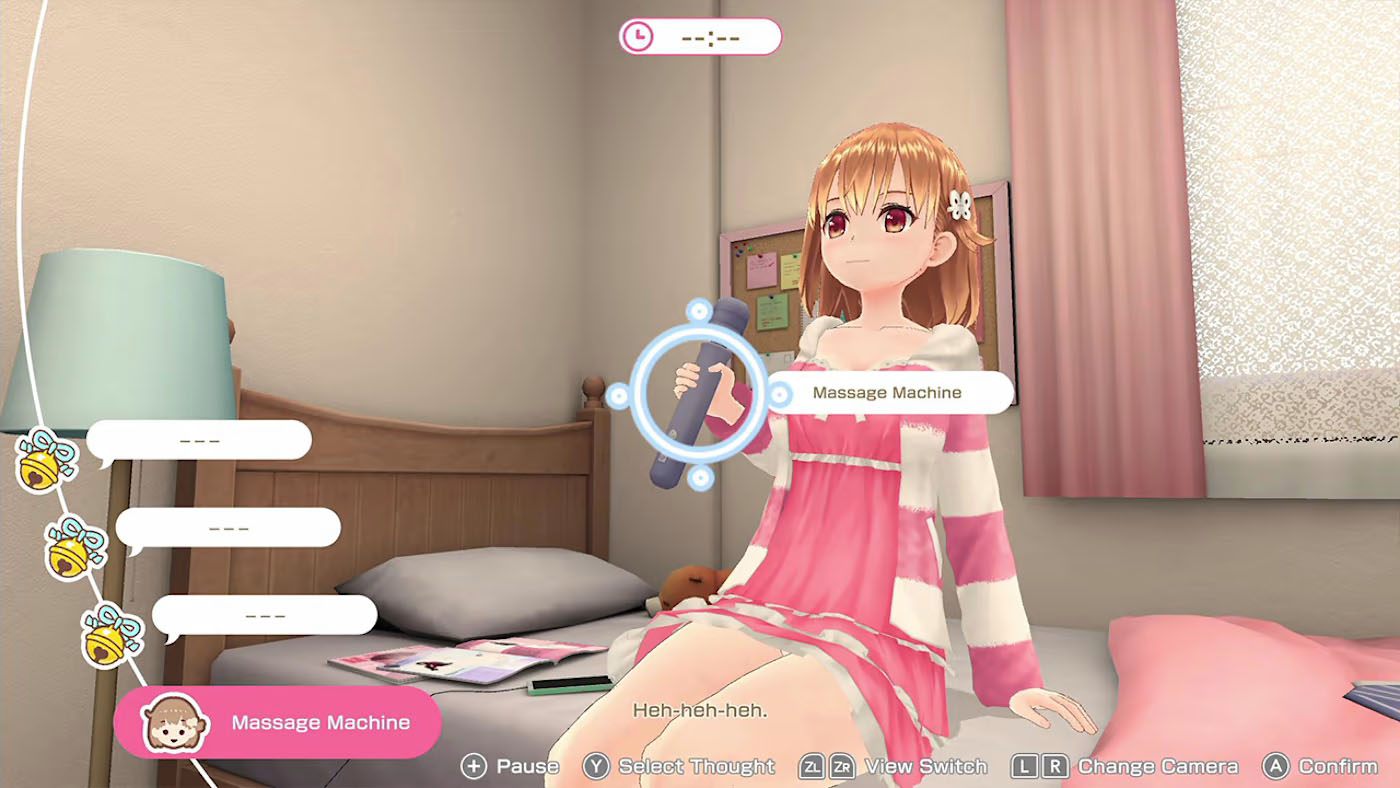 As with everything else to do with fan service (or violence, drug use, swears, or any other “nasty” that you want to think of in video games), it’s how the material is positioned that matters. If the characters are empowered and positioned as in control of the situation, I haven’t got an issue with voyeurism as a thing in a game. Quite the opposite. I enjoy it a great deal. Take Dead or Alive Xtreme 3, for example. It’s basically a video game gravure simulator, and the entire point of the thing is to watch pretty girls in tiny bikinis frolic on the beach, but given that the girls are enjoying themselves, it’s implied that they’re aware that you’re there (and they’re more than happy to have you around), and that they’re doing what they want to (i.e. they’ll turn down the sleazy swimsuit you try and give them if they don’t like it), it passes the threshold for me. I acknowledge that it’s often laboured and there’s a lot of objectification going on (which is a different story entirely), but the voyeurism is fun rather than a “nasty.”

Another great example is the Summer Lesson VR titles on PlayStation VR. In those games, you get to watch the girls study, relax, or even interact with you, and the VR element even puts them within touching distance. But rather than being a creepy voyeuristic thing, again, they’re aware of who you are, and by virtue of some surprisingly deep characterisation, the interactions with them have an authentic and sweet tone, rather than something sexualised.

The Future You’ve Been Dreaming Of is very different in tone. Sachi is either unaware that you’re there or she’s explicitly unhappy about what you’re doing to her (for about two seconds before she just forgets that an invisible presence just fondled her). Her character isn’t presented as having agency (she won’t even do anything unless you command her to), and she’s less a participant in than a victim of proceedings. She’s also very sexualised, since just about everything she does is framed to draw attention to her body parts. 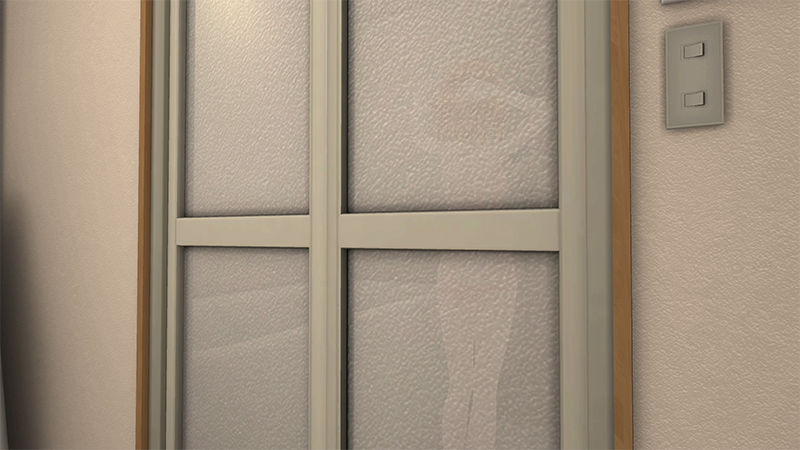 Even this could have been fine if the developer had done something interesting with it. The concept of The Future You’ve Been Dreaming Of is not dissimilar to the Punch Line game from a few years ago, where you likewise found yourself as an invisible presence in an apartment filled with pretty girls. That game used the concept to subvert the whole “pervy anime” tropes, however, by tempting you to look, but punishing you for taking advantage of the situation to get a glimpse of panties. This one is far more earnest, as far as I can tell from the plot, and simply wants you to enjoy watching the girl as she gives herself a massage (yes, with that massager). There is no subversion. It’s just a show.

With all of this said, it may well be that I missed something in the plot, as it’s almost incomprehensible. For all I know it might be a work of Shakespearean or Kubrickian brilliance in Japanese and I’ll forever be limited by reviewing the English version. The translation of The Future You’ve Been Dreaming Of very much reads like a Google translate + one quick edit effor. It’s marginally better than what a translation AI would have come up with, but still far too laboured and clunky to read like natural English. I found this odd as qureate has commissioned better localisations in the past. Whatever the reason for this, however, the fact I couldn’t be entirely sure whether the game was a case of self-deprecating humour, satire, or a straight down the line perv fest meant that I had no choice but to assume the latter as whatever humour it had was ruined in the delivery. Of even greater concern, for a game that is about developing a bond with a single character, having that character be almost incomprehensible is a massive problem. It’s entirely possible that she’s a much more interesting character that I’m giving credit for here, and that would go a long way to mitigating the sleaze factor, but it just doesn’t come across in the translation.

After all of that, I also want to address why it comes across as a bit tame despite being a voyeurism sim. If qureate’s big intention here was to make a voyeuristic pervy sex-themed game, they went just far enough for it to be sleazy, without actually reaching the point where it’s titillating. Yes, great, Sachi’s short skirt often flares up and you get a look at her panties. Sure, you can watch her vague outline in the shower, and yeah, you can tap on parts of her body and she’ll go “eep”, but none of that is exactly pushing boundaries. The recent Seven Pirates H took things in more eye-opening directions. I got bored with exploring the fan service potential of this game within the first half-hour, and that’s just not a good sign for a game that has nothing else going from it. As someone who enjoys fan service, qureate has been a rare let-down here. Especially coming from Duel Princess as its previous title. 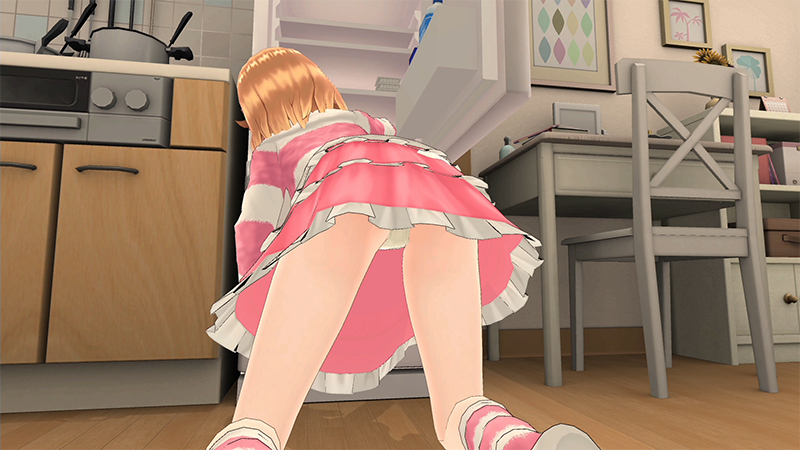 Putting aside the poorly translated story and the subsequently sleazy theme the game takes on, there’s just nothing to The Future You’ve Been Dreaming Of. It’s a too-basic life simulation… and the fan service isn’t even that good. Unfortunately, this is a rare misfire for qureate on what should have been the development team’s home turf.