Tolkien would be proud.

Spellforce III is one of those games that, even a generation ago, would have been inconceivable as a console release. The game’s blend of RTS and RPG mechanics would have been deemed too complex for a controller to bother with, and the developers and publishers alike would have assumed that there was no audience for the game on console, anyway. Everyone knows that people only play these things on PC, or so the thinking went.

Of course, there is an audience for strategy and RPGs on consoles, and developers have become very good at adapting complex PC interfaces for consoles. Spellforce III follows in the wake of Crusader Kings III, and I couldn’t be happier with this trend.

Spellforce III features a traditional Lord of the Rings-inspired fantasy world of epic conflict between elves, dwarves, men and monsters. It doesn’t do anything special with this. In fact, the one big thing I found disappointing across the whole experience was just how unwilling the game is to push boundaries and do something original with the material. It’s actually well-written and performed, and the narrative production deserved better than “generic fantasy.” Nonetheless, you do get to enjoy a story of misery and dark shadows hanging over the world, complete with corrupt religions and superstitious commonfolk. The persecution of magic users is analogous to witch hunts, the hordes of monsters call to mind the barbarians that sacked Rome, and so on and so forth through every standard trope. I’ve never grown out of this stuff so I found myself engrossed in the quality of the writing despite myself, but up-front this quality about Spellforce will likely cause some to roll their eyes. 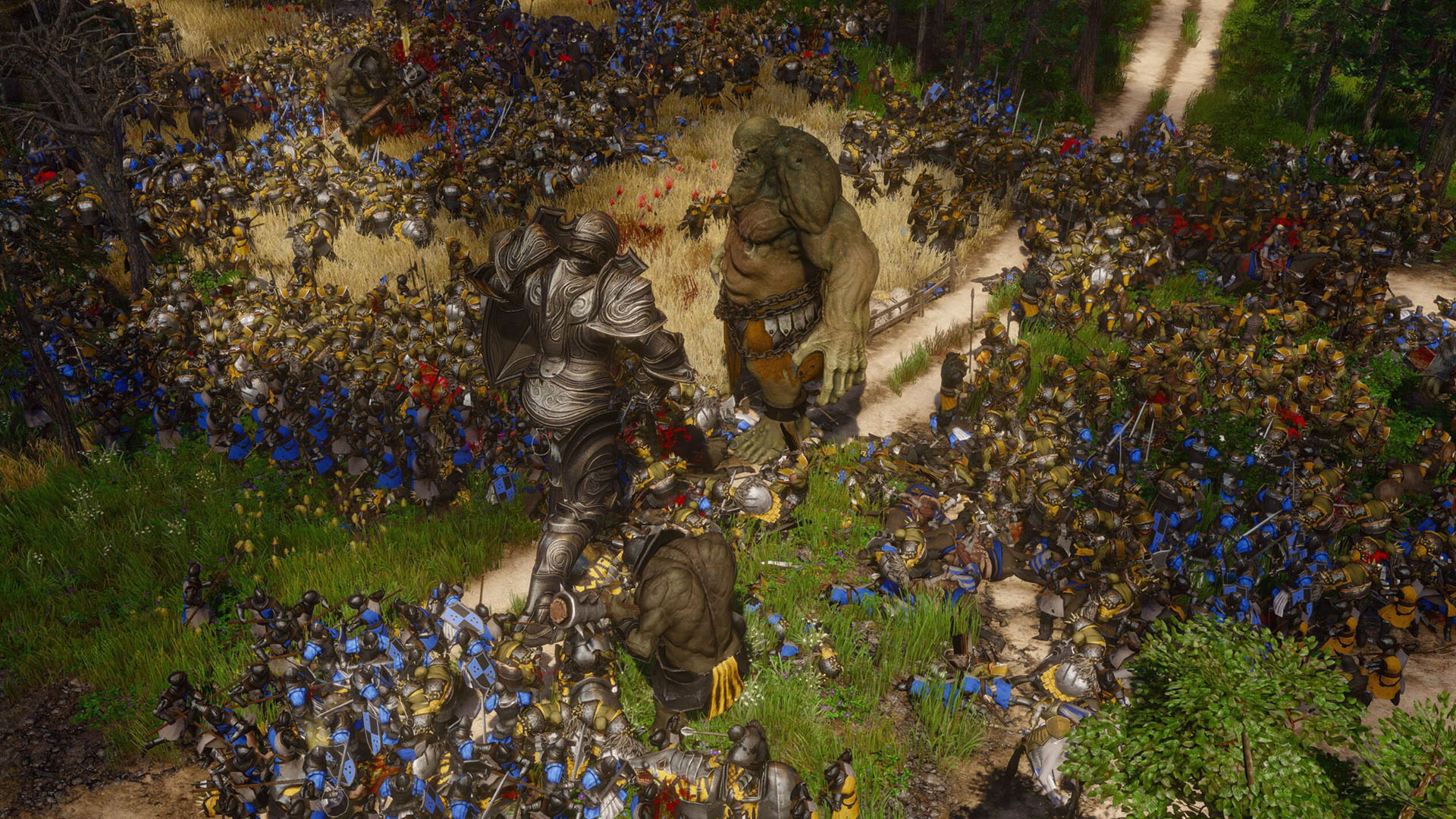 What you’ll really be playing for, however, is the way Spellforce III blends genres, because it does so so expertly it’s almost amazing. On the one hand, there is a full and detailed RTS, where you’ll be building a combination of resource-producing buildings, unit-producing buildings and defensive structures, and then using them to amass a tsunami wave force that will roll over your opponents. This is as traditional as RTS comes – think Warcraft or Command & Conquer – and it’s rather refreshing given how many RTS titles these days aspire to be 4Xes.

Then you’ve got the RPG element on the other hand, where you’ve got a small group of named heroes, and they can delve into dungeons, take on sidequests, and chat with enemies and allies alike. These heroes earn experience levels, and new skills and abilities that help them become an army unto themselves. Each hero has multiple skill trees, can be fully equipped with a wide range of weapons and armour, and messing around with this stuff is as fun as it has ever been.

In SpellForce III you’ll be transitioning so smoothly between the two gameplay styles that you’ll wish that all games across both genres behaved like this, because it lends so much variety to each “level” as you play through the campaign. You might start out with just your party of heroes, tasked with getting to a location on the map. After a brief digression to help a local in distress, you run into an enemy base and army and beat a hasty retreat so you can set up your own forward base. Then, having weathered some attacks yourself, you’ve got an army that’s ready to roll on over that opponent’s base, which your champions leading the charge. That’s just one example of a level, but most involve that kind of movement between party-based questing and squad-level combat. 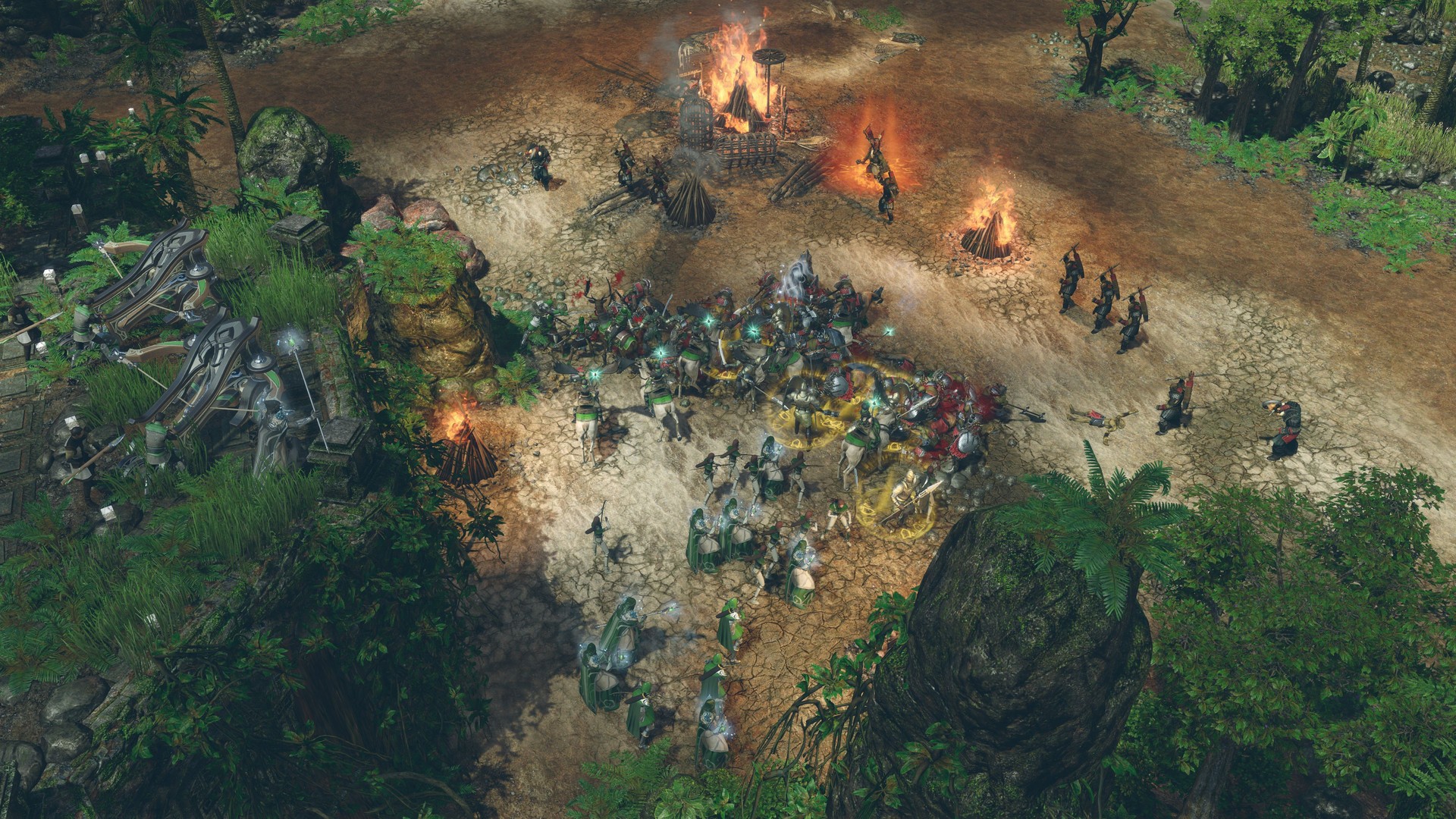 The tactical side of the action is admittedly light on, in the sense that you’re only really going to be collecting all your units together and telling them all at once to swamp-attack the enemy.  Defensively you can set up perimeters of towers, and there are plenty of buildings to choose between, but when it comes time to attack, it’s an all-at-once blind charge. This might be because of the controller inputs, and I don’t know if playing with a mouse and keyboard would allow for a little more flexibility with multiple units. It’s irrelevant either way, though, since the game is perfectly playable with the controller and the horde tactics.

The only genuine issue I had with commanding my units was their aggression. When characters defeat an opponent, if there’s another one even remotely nearby they’ll immediately beeline for them. This is not unusual for the genre, but the distance that an enemy or building can be away and still draw the aggression is fairly long, and so I constantly had units going on merry chases, sometimes without me noticing until it was too late. This also made cohesion difficult when there were a lot of buildings and enemies around at once – each time I attacked an enemy base, for example, was an exercise in pointing at the base and almost hoping for the best.

Spellforce III has a good and meaty campaign, but as with several of my favourite strategy games of all, it’s the skirmish mode where I’ll be spending the bulk of my time. It, too, is as traditional as traditional gets. You select a map to play on, one of the factions, and then try to beat your opponents, either human or AI. I was actually reminded of the Lord of the Rings: Battle for Middle Earth titles in this regard, as it’s free of story, the “heroes” are particularly potent at controlling the battlefield, and map design and aesthetics were very familiar. Given how much I love those BFME titles, none of this was an issue to me at all. 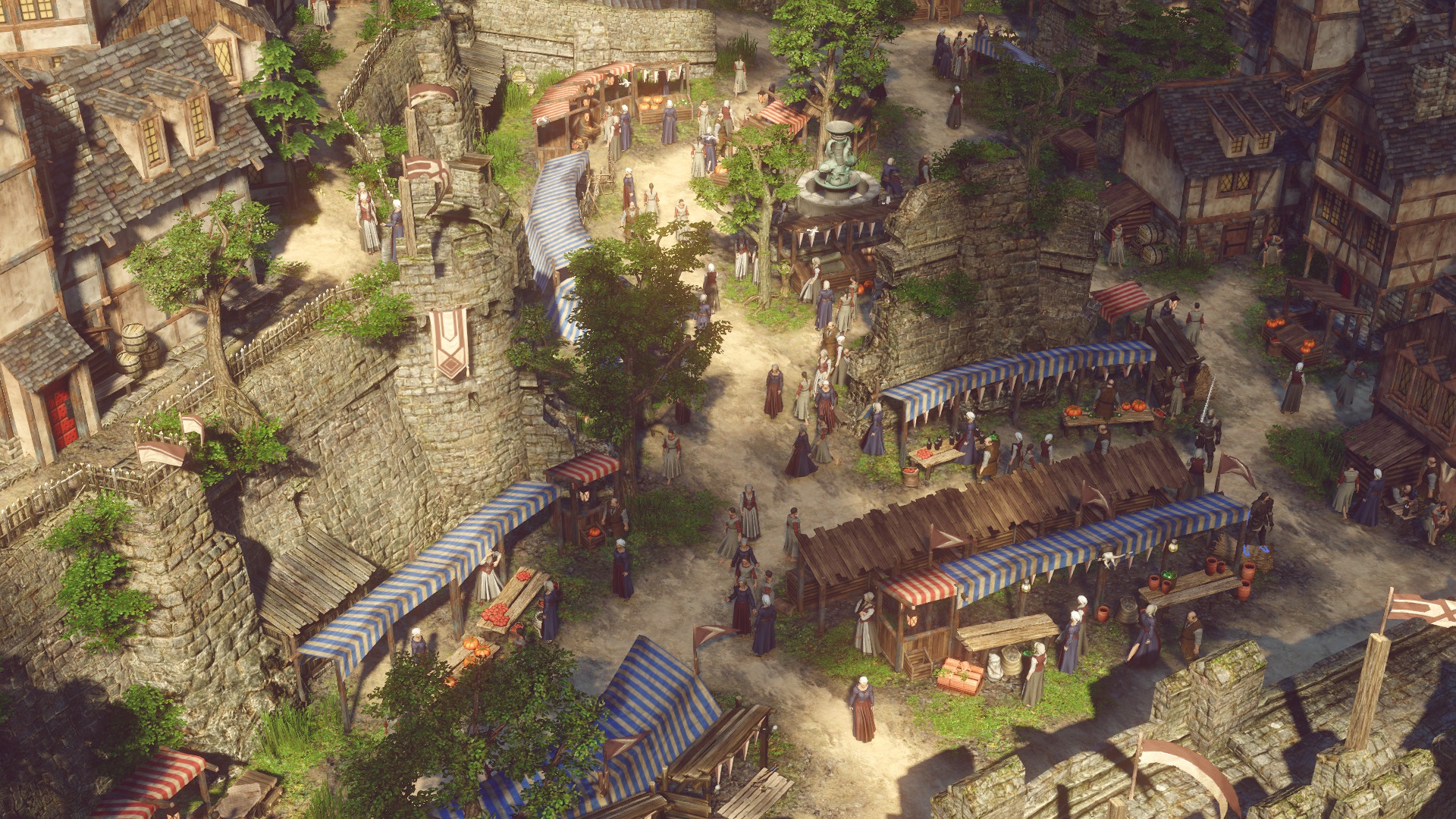 There’s also a “Journey Mode” which, in a way, strikes a balance between the narrative mode and the one-off skirmishes. In Journey Mode you’ll create a mercenary hero, take on contracts, and build their careers and reputation across the world. This mode is heavy on the emergent narrative, and highly replayable because of it, but also something of a time dump and, after playing through the proper story mode, I’d largely had my fill of “world-building”. From that point, I was content with the “casual” skirmishes.

I will end on a sour note, though: developers and publishers, please, for the love of Hatsune Miku, realise that you can’t keep the same UI and interface for the console port of your text-heavy PC game. When you’re playing a game on PC, the screen is centimetres from your eyes. On console, you’ve generally got a lounge room separating the two. Tiny little text that forces you to sit right in front of the TV like you’re in a bad horror movie (you know, right before you get sucked into the screen by some malevolent spirit) is not how people want to play their console games. At the very least let people choose the size of the font.

Spellforce III is, effectively, a throwback game, being both old-school RPG and old-school RTS, stuck on top of an old-school fantasy setting. The developers have done a remarkably good job of taking complex controls and making it work on a controller, and while the game isn’t particularly boundary-pushing, innovative, or stand-out, it is engrossing in the way that it combines genres so seamlessly and entertainingly.