Unfortunately, there's no button for a Neymar fake dive.

Mario Strikers: Battle League is the perfect example of how a modern arcade sports title should behave. It is fast, furious, and heavily reliant on twitch reflexes and speedy precision. Just like you’d want from an arcade game. It’s also instantly accessible and, at a basic level, a pure joy to play. But there’s also more nuance and skill to mastering it than you might have expected going in, and it’s this depth that elevates it and really makes it worth your time. After the Mario Tennis and Golf series have deviated so far from their roots that you’d struggle to argue that they even resemble the base sport now, it is nice to have Battle League show us all how it should be done.

Related reading: My review of the most recent Mario Golf title on Nintendo Switch.

Battle League is fast and aggressive 5 Vs. 5 (including goalies) football. You’ll select four characters from a roster of Mario Bros. favourites, each with their own strengths that they bring to the squad, and then take to the field in either solo-player “cups”, or multiplayer (local and online) play. The controls are simple to pick up: there are passes (ground and air), a kick (that can be powered up), a dodge, speed burst, and (when on defence) a tackle. You can learn how to play the game in about 10 minutes. Actually playing well, however, is a surprisingly steep learning curve.

For one thing, everything really does move fast and with precision. Characters are super responsive, passes and kicks snap from origin to target in the blink of an eye and, when the flow of passing gets going, can be hard to follow until you become very familiar with it. Thanks to tightly accurate controls, this sheer speed is enjoyable, rather than a potential source of frustration, and while you may be a little bamboozled at first, there’s a point that you’ll reach after a few games where it all feels good. Setting up an elaborate passing routine that results in an easy shot on goal is almost cathartic in how rhythmical it is, and while the offensive side of the sport is the focus of almost all play, slamming a tackle in to steal a ball from an opponent at the last moment before a certain goal is scored against you is uproariously funny in its own right. This is especially true when you’ve just decked your mate’s Bowser with the humble little Toad and dashed off with the ball. 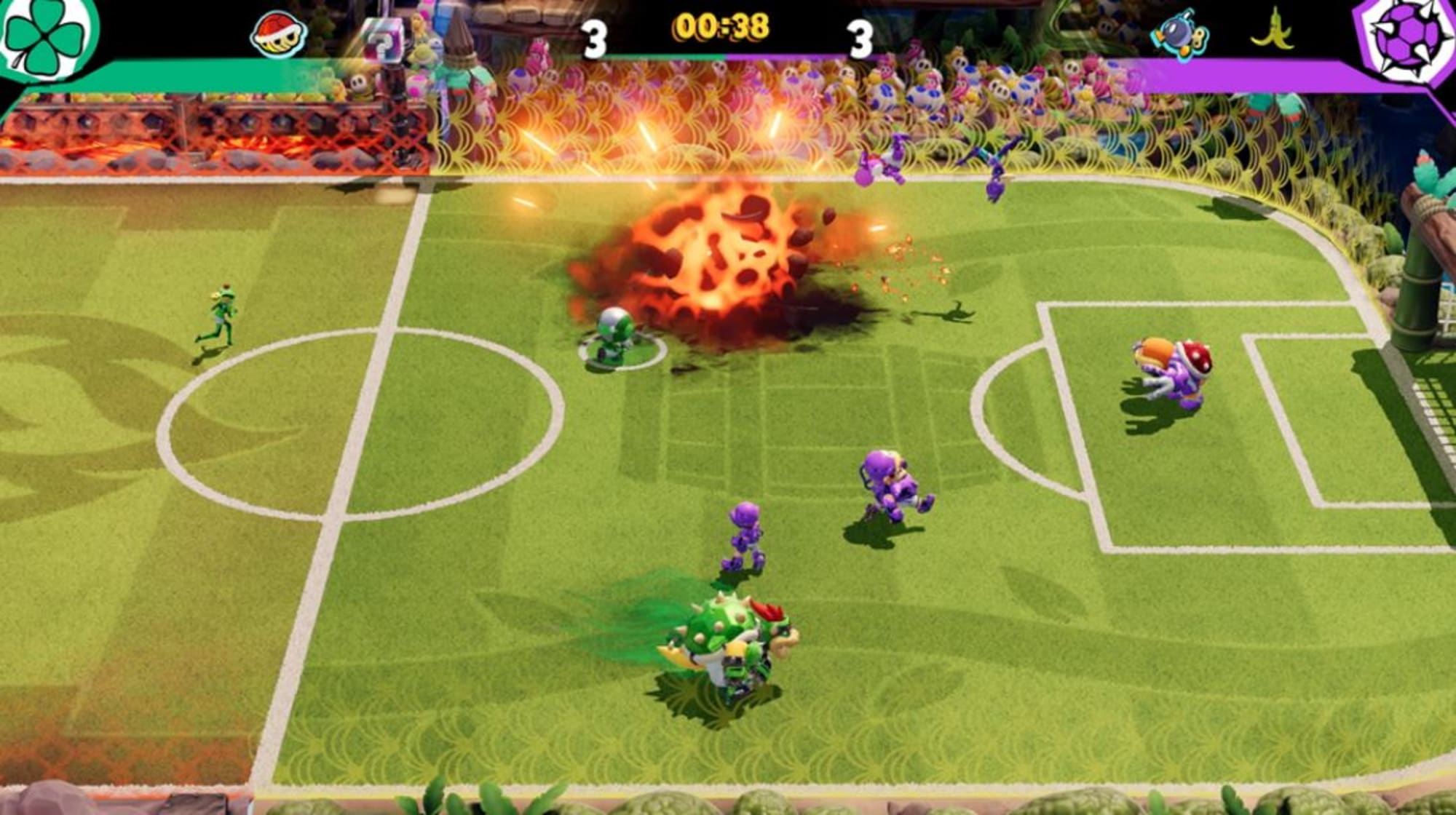 As with any other Mario sports title, there are powerups, ranging from invincibility stars to speed mushrooms, shells and bombs. One of the big issues that I have had with other Mario Sports titles in recent years is that the power-ups and specials feel overdone to the point of turning the games into gimmick fests. Mario Strikers, meanwhile, turns them into a great feature, and that’s because there is some restraint shown with how frequently you’ll get them and how often they play the defining role in a victory. They’re there and you can be strategic in how you use them, but, also, if you’re good then you can play around them and still be part of a match.

Finally, there’s the big golden orb. Over the course of a match, there will only be a couple of these that appear on the field, but they’re the holy grail of power-ups. Pick this up and your entire team starts glowing, giving you a few seconds to get into the opposition half and launch a special charged attack. Activating this results in a little QTE popping up. Fail at it and the opponent’s goalie will probably manage to block the shot, though usually after being knocked out for a second or two, giving you a second chance to take a quick shot if you can recover the ball. Get a perfect, however, and the shot is not only unblockable, but you’ll get two points, rather than the usual one. Needless to say, when those orbs appear on the field, the competition for them is especially fierce. As powerful as they are, however, much like the rest of the power-ups, the golden balls are balanced. Actually activating one requires a lot of space, otherwise, it’s easy to tackle the opponent before they can get the kick off. What’s more, you really do only have a couple of seconds before the effect fades, meaning that it’s usually possible to shut the opposition down if you’re skilful enough on defence. Consequently, when you’re the one with the power-up, you need to skillfully move the ball around to get the space you need – see? Unlike other Mario sports titles, Mario Strikers is about nuance, not spamming abilities and items.

In single-player, Battle League is fairly thin on the features, with just a couple of tournaments for you to play against AI that can put up a decent challenge, but are otherwise just an unremarkable sequence of matches. It’s hard to be too disappointed, however, given how well the game delivers on the multiplayer experience. There are a couple of things about Mario Strikers that are really noteworthy if you’ve got friends around. For one, you can play four against four in local multiplayer, with each player using one Joy-con controller. It’s not the most comfortable controller for this kind of arcade action, but given that everyone is playing with the same constraints, it’s also not game-breaking. Playing like this is pure local multiplayer bliss, and if you get a group of friends together on a Friday for beers-and-Strikers, you can probably expect the police to show up at around 3am following noise complaints. It’s going to get loud. 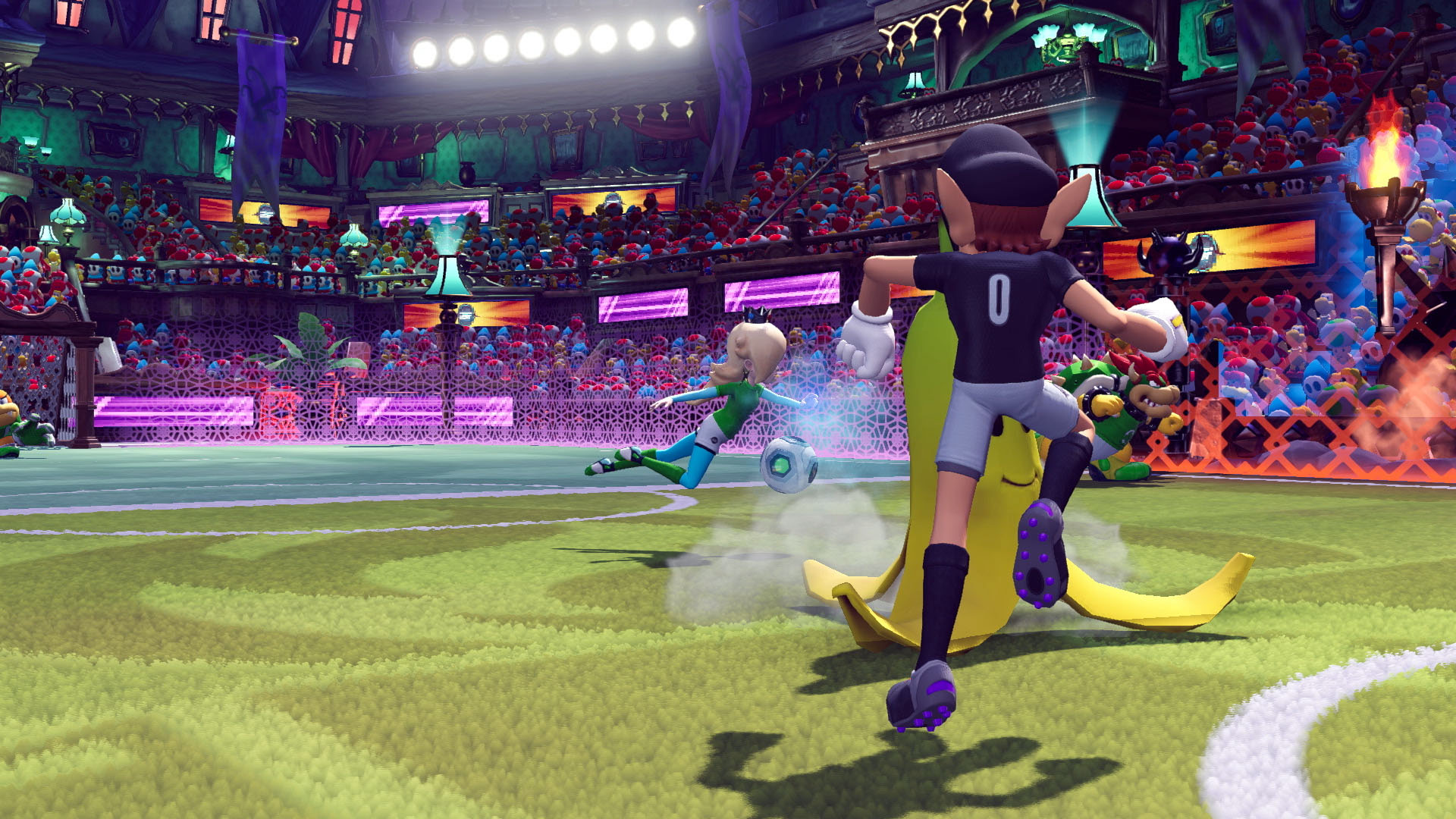 For those that want to take Strikers seriously, meanwhile, there’s the online play, and I can really see this becoming an eSports thing. Building up a rhythm and plan of attack through the passing game, and developing defensive counters to your opponents, takes skill. This is a fundamentally skill-based game, and the online “Club Mode” allowing for up to 20 players to get together and compete, complete with leaderboards, is going to give Strikers a long tail indeed.

As you might expect, the game drips Mario charm. All the characters have their own little victory animations when they score goals, and throw some pretty funny tantrums when, as captain, they concede goals to be in a losing position. Each character’s ultimate shot is substantially different, too, both in terms of the animation, and the effect it has on the play area. Yoshi’s giant boulder egg smashes people as it bounces towards the goal. Peach’s “heart short”, meanwhile, creates a trail behind the ball as it travels in a heart-shaped pattern on its way to the goal (some incredible bend on that shot, Beckham), and charms anyone that gets caught inside the heart shape for a few seconds. If I was nitpicking I would say that the roster itself is a little thin, but there’s still plenty of variety in the teams that you can build.

Mario Strikers might come across as limited to some people, especially those that are only really going to get stuck into the single-player game. However, as a multiplayer experience, and whether you’re going to play locally or online, this thing excels in every way. It’s accessible, but also had a learning curve that more serious people will love. It’s laugh-out-loud hilarious for party sessions, while also having the feature set that it needs to get entire clubs to form around it. I can easily see this joining Smash Bros., Splatoon and Mario Kart as a standard part of any multiplayer rotation on the Switch. Most of all, though, this is a Mario Sports title that hasn’t lost the identity of the sport itself after implementing power-ups and Mario character specials. In this way, it stands apart from the Mario Tennis and Golf titles, and that’s a good thing.

Last weekend, I did an in-depth stream of Easy Come…