Not once have I ever thought to myself “hmm, I really need a fishing RPG in my life.” That is, not until now. Fishing Paradiso is, in fact, a fishing RPG, and I honestly say my life is better with this game in it. It first launched for iOS/Android in 2019, which I somehow (sadly) missed. Luckily, I was in the know this time around, and had the chance to play it. The game is a sequel to Bear’s Restaurant, but it’s definitely not necessary to play its predecessor to enjoy Fishing Paradiso.

So, the bad news first: you’re dead. The good news: you’re in heaven! You made it! Heaven looks a lot like Earth, and contains many different places to fish. The protagonist is just a kid, which is really sad when you think about it. Luckily, there are loads of people also there who can help them build a home, learn to fish, and try to get to eventually land a giant fish in the Milky Way. Yes, the goal is to talk to a giant fish made of stars in the Milky Way, which can mean only one thing: they need a rocket! You fish to move the story ahead, exchanging fish for what you need. Fish can also be used to make meals in Bear’s Restaurant, where different characters will meet and chat while eating Bear’s delicacies.

There are different locations to fish, and each location has three levels to it. These aren’t unlocked right away; instead, they are unlocked as required for the story to go forward. Fishing is quite simple, at least it is using the controller (which I preferred to the mouse and keyboard option). Using the fishing rod, aim, power up as desired, and cast. It’s obvious when fish bite: “hit” is displayed where it happens so it’s hard to miss. Reel in the fish, moving left to right as needed while keeping an eye on the tension. If the tension is too much, the line will snap.

To access the fishing locations, you need to use a SkyPhone (iPhone, SkyPhone… get it?) which can be accessed with the touch of a button. There are different sections to the phone: map, fishing skills, fish, requests, and food. Fishing skills is super important, obviously, as it’s where you can decide which skills to level up using coins you earn while catching fish. The options are tension, throw, charm, stamina, and big hunter. Tension and stamina both relate to how much tension you can take while reeling in a fish. Charm makes it more likely for fish to bite. Big Hunter makes it more likely to catch the bigger fish. I found tension and stamina to be the most helpful, especially in the earlier stages of the game. That being said, each has its own benefits and I found it best to keep them at equal levels. The amount of coins given for various things always seems reasonable. I never found myself with long spans of time between being able to upgrade skills, so the progression is really well-paced.

Aside from skills, I found myself spending the most time looking at the requests section. They’ll ask for a certain number of fish, of a certain quality and quantity, and specify where to find them. They’ll also always have a reason to need the fish, which is cute. When fishing for requests, the fish will be highlighted in red so it’s very obvious what to aim for. I like this bit of hand-holding, it just made requests that tiny bit easier to complete. For requests, you’ll earn coins, which can then be used to upgrade skills. There is no time limit for filing requests; the whole thing is kind of soothing since nothing is under a time crunch.

It seems like everything in Fishing Paradiso has a very specific, very logical purpose. The map is a map. The menu lists ingredients. You can see where to find specific fish in the fish tab of the SkyPhone. My only issue is having to click on every. single. fish. while looking for a certain one to make a dish at Bear’s Restaurant. 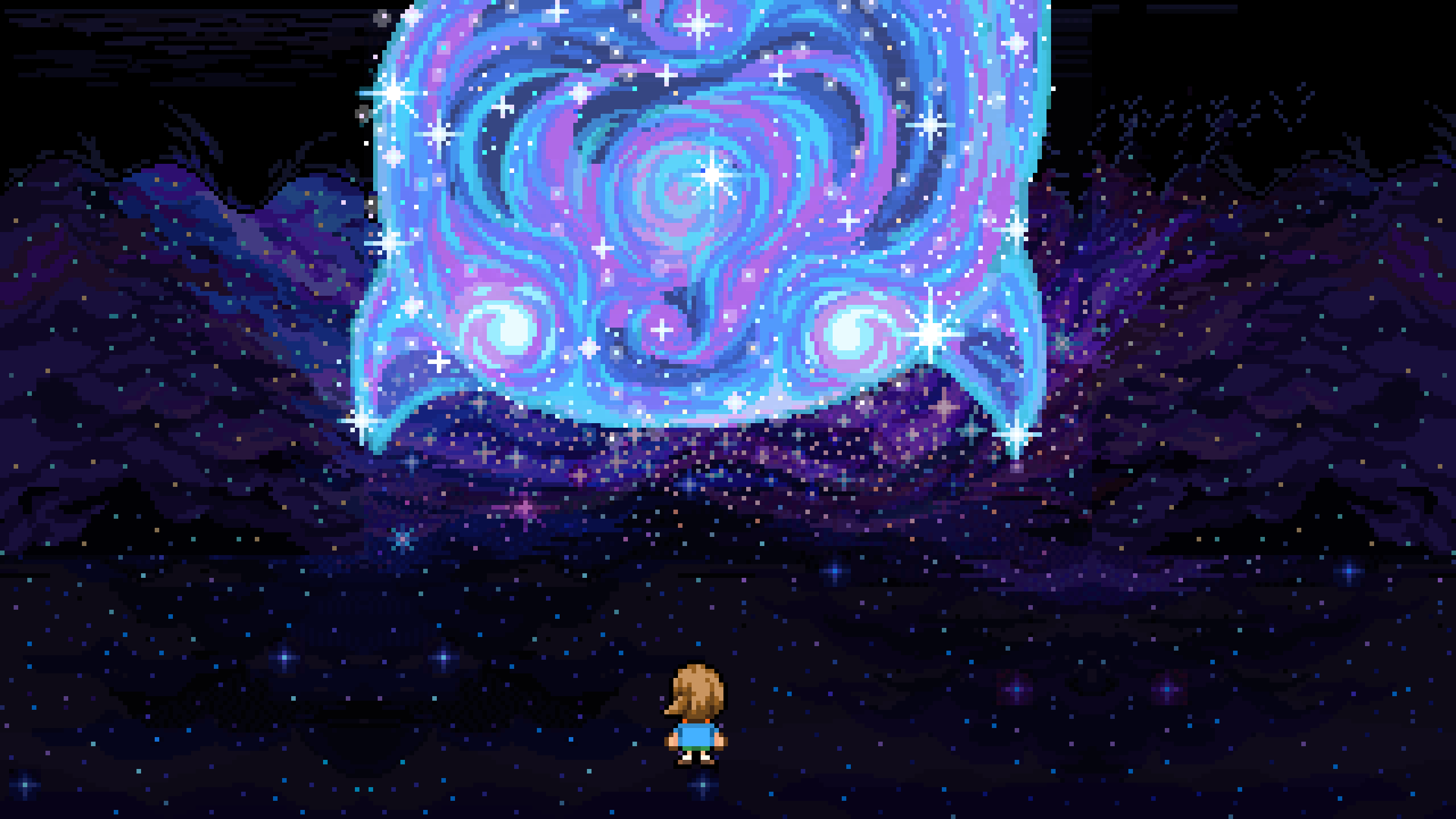 Early on in the game, you have the chance to build what ends up being a very spacious home on your very own little island. The home is fully customisable; mine is currently plant-themed but I’ve also done an ocean theme that I found quite successful. Decorations are earned by meeting up with characters when they ask for it, as well as making menu items for Bear’s Restaurant. There are floors, bars, sofas, windows, plants, and wall decorations. While being fully customisable, it’s still a bit limiting as you can only place things where the game wants them to go, you can’t just move around furniture willy-nilly.

The pixel graphics are charming, arguably near-perfection, and it really suits the gameplay. I love the detail of the fish getting larger as they come closer – it’s especially obvious when reeling them in. The music is also retro-inspired and mostly cheerful, matching with the tone of the game. After all, being dead doesn’t mean the fun has to stop!

Of course, nothing is perfect, and while I’ve said mostly great things about Fishing Paradiso, there are a couple of issues. One is my absolute number one pet peeve in video games: it never tells you how or when it auto-saves. Does it save when I change location? When I trigger a cutscene? It’s not when I exit, I learned that the hard way before having to sit through a long scene a second time around. It would be nice to either know, or have access to a save button to manually trigger it. Another issue is that the map locations aren’t labelled; it’s not usually a problem because it will highlight the locations where requests can be found. There are just times when my brain goes poof and clear labels would be nice. 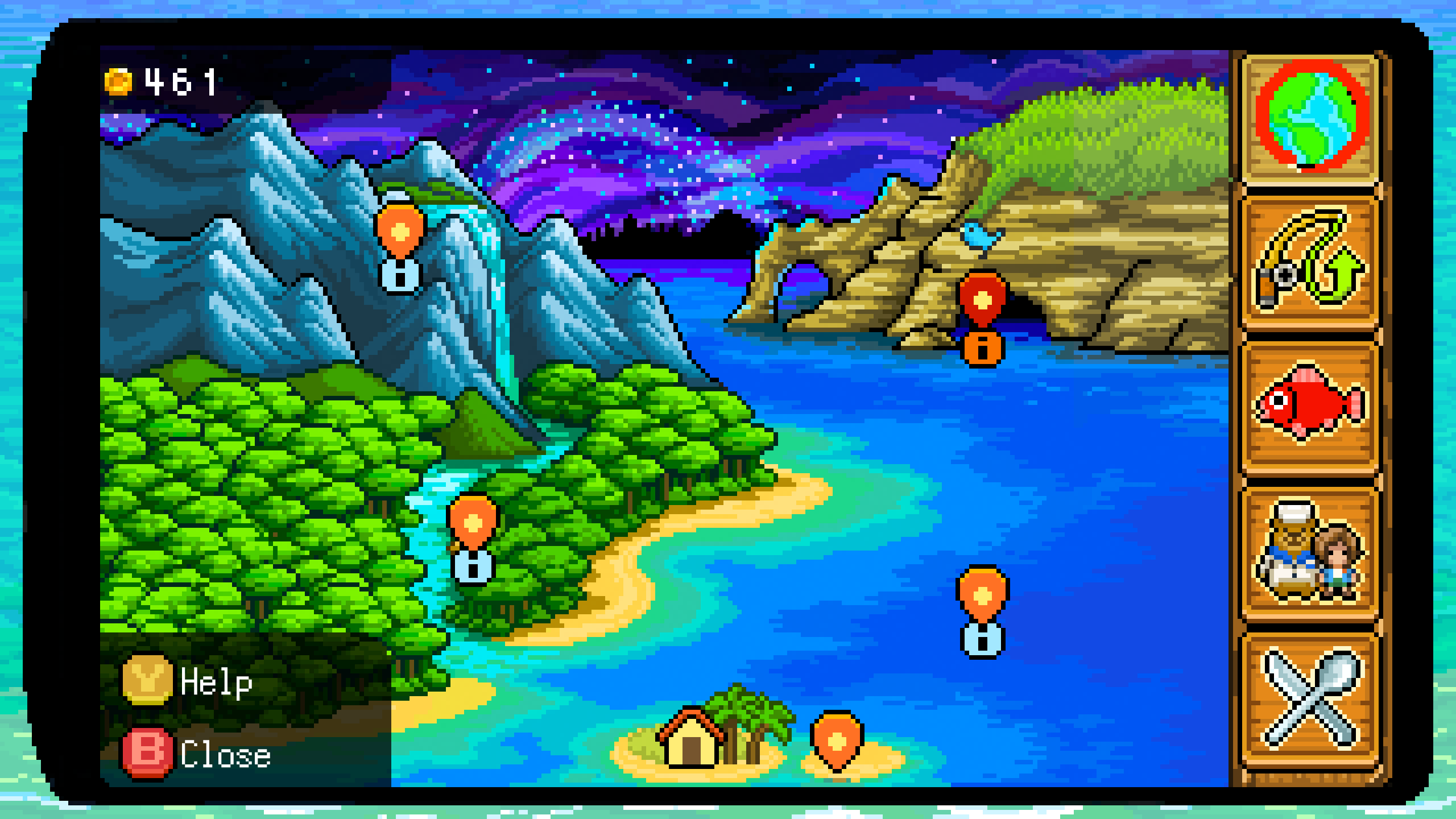 I really enjoyed my experience with Fishing Paradiso, which is available for PC via Steam now. I actually enjoyed it to the point that I will probably buy it for the Nintendo Switch, which it also just launched for. It’s also available as a free-to-play game on iOS/Android, though I think this format, where you just pay once and play as much as you like, better suits it. In short, the game is my new obsession. It is charming, well-balanced, and calming; yes, I described an RPG as calming!