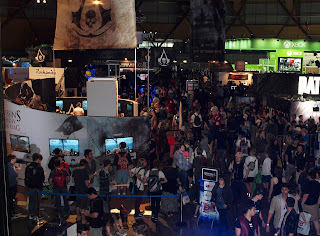 EB Expo was bigger and better in 2013. Much bigger and better. It was a who’s who of the Australian games industry, from the big international publishers right down to the tiny local indies churning out top quality stuff for PC and mobile.

We’ve got an absolute wealth of hands-on previews, interviews and opinion pieces to come over the next week, but we thought it would be a good idea to also get the team together (that being Matt, Owen, Aidan and Sam) and come up with our top 10 games to look forward to. The below ten games are the ones that impressed us more than anything else, and these games should all be very high on your “to play” list.

And in no particular order:

We were huge fans of the original Donkey Kong Country games on the SNES, and after the wonderful Returns on the Wii and 3DS, Nintendo could’ve just offered some new levels and we would have loved it. It’s a little disappointing that that is precisely all that seems to have happened here, but we loved it anyway. Aside from adding underwater parts, there wasn’t anything new to look forward to. We played it all with a big ‘ol grin on our faces, but the multiplayer is still a pain.

When we first saw Ryse over on our E3 feeds, it didn’t really grab us. It looked repetitive, and seemly had a very basic gameplay element to it. After actually playing it, it has grown on us a great deal, and those in the team that are getting Xbox Ones have this right at the top of their list of “must haves.” It looks stunning, especially the way that your character interacts with people and objects, and from what we played, it seemed that combat wise was very basic, brutal, and bloody, but considering how we were gladiators fighting for survival it seemed fitting.

On the surface, Battlefield 4 seems just like the latest expansion pack in the Battlefield series. What makes it one of our favourite games of the show is how the environments are living. In most Battlefield 3 maps, you’re fighting in a war already. My Battlefield 4 experience saw me play on Paracel Islands, which the calm waters soon turned deadly, and the next thing you know you’re getting huge air from jet skis riding off the waves, a warship gets crashed on the beach and helicopters are being flown around during a storm. Apparently the level of destruction of the environment, with the exception of weather, is controlled by players. Awesome.

We were worried about Dark Souls 2. From Software have been “promising” a more accessible experience, and the Demon’s Souls and Dark Souls that we have grown to love are not meant to be accessible. These games are meant to make us cry and whimper and throw our controllers at the wall (not that it is ever the controller’s fault). After playing the demo of Dark Souls 2 we are still somewhat worried that the experience is a little more generic than in the past, but it’s still a damned fine game well worth getting excited for.

It is tough to have a more hyped game. It’s tough to live up to the hype when the game pulls in all kinds of awards from E3 and the like. But it looks like Titanfall is doing it. If you don’t find the concept of a giant, movable, responsive, heavily armoured mech to be your cup of tea, then the super-soldiers wall running, impressive jumping range that can span flights of stairs as well as an impressive range of traditional and new arms and armour should appeal to… well, anyone.

After showing at last years Expo we had high hopes for this game’s continued development. And the Aussie indie team haven’t let us down. This time around we were able to get some hands on time with the game, and as an action-puzzle title with a beautiful gravity mechanic we now have a title to look forward to that plays as good as it looks. With Nnooo helping out with the publishing of Orbitor on consoles, we fully expect this to be an indie classic.

Nnooo so rarely put a foot wrong, that it’s depressing that its games are so often overlooked. escapeVektor might have been a little too abstract for its own good, and Spirit Hunters was a game released too late onto a dying download platform. Blast ‘Em Bunnies is going to be released close to the PlayStation 4’s launch window, and while it’s a shooting gallery, who doesn’t love a really well-made shooting gallery? Well made ones are actually pretty rare these days… and these bunnies are just so cute. For homocidal maniacs, that is.

Nintendo had a pretty quiet booth compared to last year, when it was giving the Australian public their first hands-on time with the Wii U. The booth was quiet, except for the consoles playing the Wii Party U demos, that is. People around those consoles were roaring in laughter. Because while this might be the simplest of simple board game/ minigame compilations, the way that it uses the Wii U Gamepad is nothing short of pure genius. This is the kind of game that people buy Nintendo home consoles for. The brilliant social experience.

Here’s a nice twist to the digital CCG formula – collect the cards and play the game… but the cards are fully (and gorgeously) animated. It’s a nice way to provide players with a traditional game while at the same time taking advantage of what gaming platforms can do. There’s still a long way to go for this game to hit the kind of stability and balance that it needs for commercial release, but of all the Aussie games on show this year, this one might well have been the most ambitious. 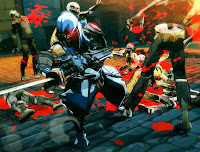 Matt had already played this game for a preview, but we couldn’t resist giving it another whirl. Once again we was struck by just how stylish this game is, and how amazingly similar it is to Goichi Suda’s own over the top and subversive works that very genuinely have a claim to being art. As such, Yaiba remains right at the top of our hot list.