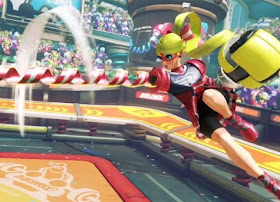 Related reading: Matt might not be much of a fan of Arms, but he is a HUGE fan of the stylistically similar Splatoon. His full review of the Wii U release.

So credit to Nintendo’s development teams for thinking outside the box. Unfortunately that’s about all the good I’ve got to say about Arms. I didn’t much enjoy this fighting game at all, to be honest.

Right from the start I found the aesthetic grating, in the same way that I found Splatoon’s aesthetic to be irritating (though Splatoon made up for it by being a good game, which we’re getting to). Nintendo seems to have decided with its new IPs that a garish, overcoloured, and overbold art direction is what sells to the youth of today, and there’s probably something in that, given that Sunday morning cartoons all do the same thing, but I find it all to be vapid and greatly uninspiring. The faux-attitude that each of the characters are meant to exhibit through their motions and design are meant to be comedic, but it’s a weak joke at best. The environments are all ripped out of those aforementioned Sunday morning cartoons and display no hint of real creative skill behind them. They’re colourful, bold, and vaguely reminiscent of the kind of art you see hack graffiti artists spraying over walls. Not the incredible stuff that an artist like Banksy creates; the trash you paint back over the moment you can afford a couple of cans of paint. 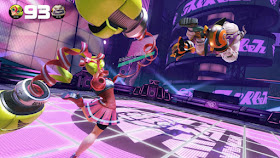 It might just be that I’m getting older (yes, it's happening), but I found that Arms’ overbearing use of bright, clashing colours to give me a headache over extended periods of play. Layering one bold colour over the next worked for something like Persona 5, because the combination of colours ended up creating slick, elegant compositions. Arms is just garish, and while I know other people seem to enjoy this approach to visual design, I simply do not understand it, at all.

But I put up with the same issues when I played Splatoon for a very good reason; the game itself was incredible. Arms just added to my frustration the more I played with it. It starts with the base mechanics; each combatant is equipped with two springy “arms” that they can fire across almost the entire length of the arena. The goal is, obviously enough for a fighting game, to land enough attacks on the other side that they get knocked out before you do.

So far, so good. The basic gameplay is smooth, logical, and with the exception of the “shield” button, which requires that you click down on the Joycon’s thumb sticks (which are far too stiff and unwieldy to be effective as buttons), it all plays quite intuitively. In fact, for the first couple of hours it seems like this is going to be quite the complex fighting game. Before each battle you can choose from a range of different types of weapons to take in - some hit hard and slow, others are fast, while still others are especially easy to manipulate. Once you’ve pressed the button to “shoot” the arm at your opponent, you can direct it to the left or right, meaning that you can hit them as they try and get away from you. Be really good with your aim and you can even disable your opponent’s weapons by hitting them rather than the opponent him or herself. These features come together to make for an almost overwhelming experience at first where you will get a sense that there’s a lot of room for precision play in Arms, though there will be a learning curve in getting good at the game. 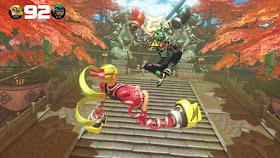 And it’s true that there is a learning curve in Arms, and it is steep. Nintendo wisely mandates that players complete the mid-tier difficulty setting of the solo play mode before they can venture into the ranked multiplayer, in order to ensure there’s a minimum standard of player there, and a newbie won’t be put right off by coming up against a series of experienced players from the outset. Unfortunately, the single player game is also cheap and quite nasty. As with a standard arcade fighting game, you’ll need to clear ten stages, with each opponent progressively more difficult than the last. But the AI gets cheap and nasty in those later stages of the mid-tier difficulty settings, and the end boss is downright painful. Thankfully losing a match doesn’t send you back to the start, and you can simply replay the one you just lost, because otherwise I - a reasonably experienced fighting game fan - would never have got through and “qualified” for the ranked matches.

Despite the difficulty and the learning curve, after a couple of hours Arms feels very limited indeed. Single player is a chore, and I never bothered with it again once I qualified for the ranked matches, but even there I found a lack of personality in the gameplay itself, even putting aside my distaste for the characters and art. Because the fighting styles are so influenced by the weapons the characters take into battle, the fundamental differences in the fighters themselves are limited - almost to the point where they may as well be two or three in the roster (heavy fella, medium person, light and nimble one), and the rest of the characters are superficial additions. And because there aren’t any combos to speak of, fights quickly become a case of the same basic action over and over again; players circle one another and jump around while waiting for an opening to get an attack in.

I appreciate that this game is more in line with Nintendo’s eSports aspirations, and therefore “balance” between characters is of paramount importance, but I feel like this one’s a touch too far on the side of being overly cautious. 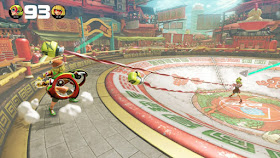 With all that said and done I suspect Nintendo has found itself another popular little B-tier franchise in Arms. I can see people who enjoy the aesthetic and the intensity of the battles spending a lot of time in playing this one, and it will sit with Splatoon as Nintendo’s quirky, creative, fundamentally different take on competitive gaming. I just don’t think I’ll ever play it again, having now wrapped up the review.