Annapurna Pictures, best known for films like Her and Zero Dark Thirty, is expanding into game publishing. Its new publishing arm, Annapurna Interactive, aims to "promote personal, emotional, and innovative games that explore the artistry and diversity of the medium."  We at DDNet are of course excited to hear this and will be following developments closely.

The first two games on their publishing roster for release in Spring 2017 are Giant Sparrow’s What Remains of Edith Finch (PlayStation 4 and PC) and Jason Roberts’ Gorogoa (PC).

Giant Sparrow's first game was The Unfinished Swan - a game that made it onto our Best Art Style list of finalists in the Best Games of 2012.

Gorogoa is a lovingly hand-illustrated world suspended inside a unique puzzle. To solve the puzzle, the player rearranges a few tiles on a simple grid. But each tile is also a window into a different part of the game world and each window plays like its own little game. Imagine pictures escaping their frames and joining together to create new scenes.

The publisher has picked up a select group of industry veterans to run the newly founded studio out of West Hollywood, California, with profiles including work on games like Journey, Flower, God of War, Everybody's Gone to the Rapture, and Fat Princess. 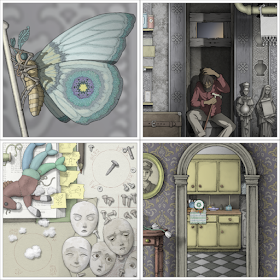 If the original Kickstarter-funded Shovel Knight wasn’t enough for you, you’re in luck: Yacht Club Games have announced a prequel. Specter of Torment is set to release in the first half of 2017. There is no word on what platforms the game will grace, but we do know the game is — as Shovel Knight was — a 2D side-scroller. In Specter of Torment, Specter Knight becomes the protagonist. According to Yacht Club Games, the game includes “new areas, new music, new enemies, new objects, new boss fights, new weapons, new armours, and way, way more than ever before."

Related reading: Our review of the original Shovel Knight.

Could this be the much-hoped-for revival of the Star Ocean IP - a mobile free-to-play title with microtransactions? It seems almost sacrilegious to even consider it ...

DDnet's editor-in-chief reviewed this year's Star Ocean V positively, but it's no secret that the general reception, both in Japan and the West, was lukewarm at best. You can read his review here.

The game's release in Japan has been announced for 2016 - but as we're fast running out of time, with no further updates so far, we assume it is delayed into 2017. http://www.jp.square-enix.com/soa/

The story of Anamnesis is set in space A.D 2625, with the player controlling the captain of the Pangalactic Federation starship GFSS-3214F, on exploration in deep space following the events of Star Ocean: Integrity and Faithlessness two years earlier. After a surprise attack by pirates, the entire crew escape in pods, while the captain stays on board with only the AI robot Coro (voiced by Ryūsei Nakao).

While investigating a seemingly barren planet, they encounter a mysterious woman, named Ivlish (voiced by Sumire Uesaka), who uses a powerful form of Symbology magic that allows her to summon warriors from throughout time. She joins the captain back on the ship and the course is set to return home to the incredibly distant Earth.

Of course there has to be a cute critter - and in Anamnesis it's a robot called Coro in charge of all operations of the battleship. Due to his over-developed capacity for emotional expression, he can get a bit reckless, and he takes the supremacy of his rule so seriously that whatever the captain says is gospel.

Mobile games in Japan are a big deal, and their quality is actually much higher than people in the west generally attribute to mobile gaming. So colour us interested in this one, and hopefully Square Enix decides it's worth a localisation.

Did you miss that PlayStation Experience? Catch it all here

Over the weekend, Sony held its now-traditional end of year PlayStation Experience show, and announced an awful lot of good stuff. A couple of key highlights below:

Nier Automata is being released in March next year. That's the western release, so it's coming soon after the game lands in Japan.


There was also a new Uncharted game (staring Chloe and Nadine) and a new Last of Us title released. I know those are big deals for some. Not so much for us, but it's good to see Sony catering for all tastes.

If you missed the show, you can watch the recap below: